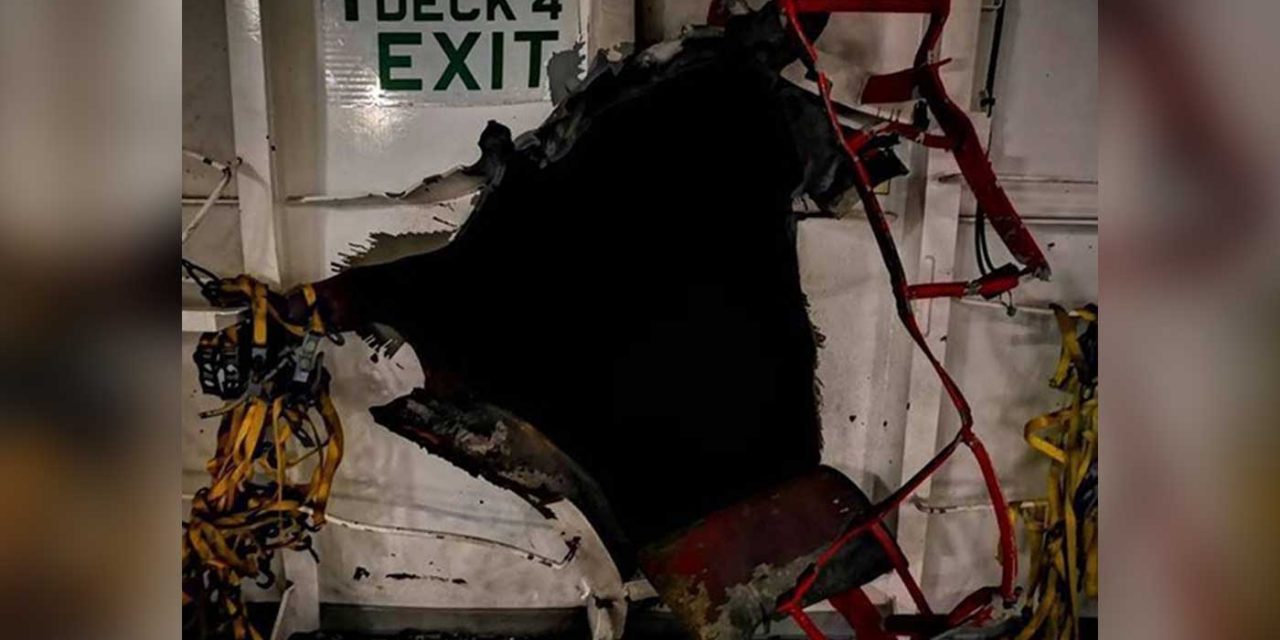 Last week an Israeli cargo ship suffered a mysterious explosion in the Gulf of Oman, forcing it to port. Israel has accused Iran as being responsible for the blast, responding by striking Iranian military targets in Syria and urging the United Nations Security Council to act against Iranian aggression.

The Gulf of Oman is one of the busiest shipping lanes, with a third of the world’s oil passing through the waterway, making it vital to remain secure. This latest incident has raised alarms about security in the Middle East.

The attack was against the giant MV Helios Ray, an Israeli owned, but Bahamian-flagged roll-on, roll-off vehicle cargo ship. Thankfully, the ship was able to make it back to port for repairs and will set sail again in the coming days.

The blame has been placed on Iran, who have been accused of a number of attacks against civilian vessels in the region, including the illegal capture of British-owned oil tankers in 2019.

Prime Minister Benjamin Netanyahu on Monday said that there was no doubt Iran was behind the latest terror attack.

“This is indeed an action by Iran, it is clear,” the prime minister told the Kan public broadcaster. This is an accusation that Iran “strongly rejects”.

Asked whether Israel would respond to the attack on the ship, Netanyahu said that Iran “is Israel’s biggest enemy and we are striking them across the region.”

Airstrikes were reportedly carried out by Israel against Iranian targets in Syria over the weekend. The strikes were not confirmed as coming from Israel, but intelligence agencies said the strike hit the area of Sayyida Zeinab south of Damascus, where Iran’s Islamic Revolutionary Guard Corps and the Lebanese terror group Hezbollah are present. Hezbollah is controlled by Iran.

IDF Chief of Staff Aviv Kohavi called Iran’s attack on the tanker a “reminder” from Iran.

“This is the place to reiterate that the IDF acts and will act against the threats that endanger [Israel], near and far.”

The comments from Netanyahu and Kohavi point to Israel being behind the strikes on Iranian targets in Syria. Although Israel has not confirmed or denied its involvement in these strikes.
Israel is also seeking action against Iran at the United Nations.

In letters sent to US Secretary General Antonio Guterres and US Ambassador Linda Thomas-Greenfield, who is currently serving as the rotating president of the Security Council, Erdan said the February 25 attack was carried out by Iran’s Islamic Revolutionary Guard Corps.

“The IRGC attached an explosive device to the vessel that caused severe damage forcing the ship to return to the port of Dubai to ensure the safety of the crew,” Erdan wrote.

Erdan highlighted the IRGC’s seizure of a South Korean tanker in January and a series of attacks in May 2019 on ships near the United Arab Emirates port of Fujairah, which have been attributed to Iran.

“These and other repeated Iranian and Iranian-sponsored terrorist attacks at sea not only jeopardize the safety and security of international shipping… but also constitute blatant and repeated violations of the United Nations Charter and of Security Council Resolutions,” he said.

Iran’s actions are in breach of the UN Charter and Erdan urged the UNSC to “hold the Iranian regime responsible for this attack and for destabilizing the region.”

He also stressed Israel will take “all necessary measures” to protect its citizens and sovereignty.