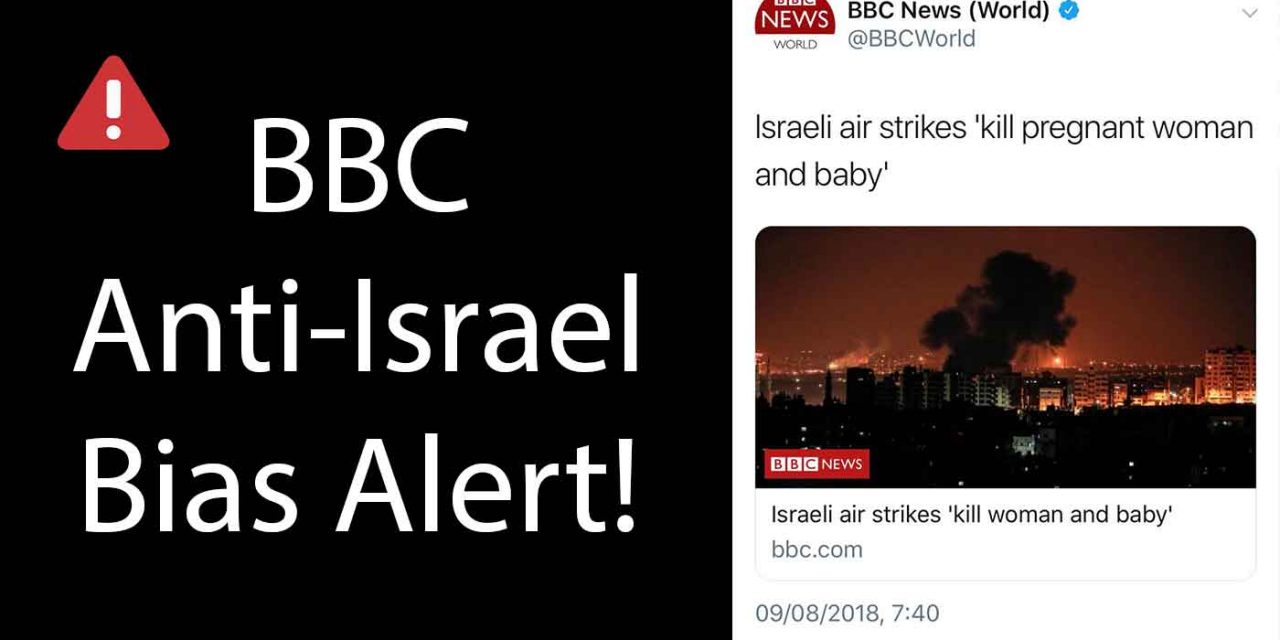 The Israel Ministry of Foreign Affairs has lodged a formal complaint against the BBC after a blatantly biased headline from the corporation accused Israel of killing a woman and baby, whilst omitting the terrorism of Hamas.

Overnight Wednesday, the Hamas terror group in Gaza launched hundreds of rockets at Israeli civilians. Hamas proudly claimed responsibility for this atrocious act as they hospitalised Israeli civilians, one being in a critical condition.

In response to this terrorism, Israel carried out airstrikes against Hamas military targets. Every target was listed and documented. Unfortunately, a Palestinian woman and child were killed in one of these attacks. Two Hamas militants were also killed in the strikes.

To explain all these events in a headline, the BBC chose this one, “Israeli air strikes ‘kill woman and baby'”.

That’s right, despite Hamas starting this altercation and Israeli civilians being deliberately targeted and injured by terrorists, the BBC chose not to put any of this information in their headline and instead focused only on the Palestinian mother and child that were accidentally killed in strikes on military targets.

The BBC purposely chose to paint Israel in a bad light and once again defend the terrorist actions of Hamas.

A spokesperson for Israel’s Foreign Ministry wrote a tweet to the BBC saying that the headline was “deliberately misleading!!! Israel reacted following the launching of over 100 rockets at Southern Israel, targeting and injuring civilians. Change it immediately!!!”

Emmanual Nahshon tweeted, “@BBCWorld this is a formal complaint by @IsraelMFA .This title is a deliberate misrepresentation of reality ( that’s the polite equivalent of “ this is a LIE”, if you don’t get it). Israelis were targeted by Hamas and IDF acts to protect them.Change it IMMEDIATELY!!! @IsraelMFA“.

.@BBCWorld this is a formal complaint by @IsraelMFA .This title is a deliberate misrepresentation of reality ( that’s the polite equivalent of “ this is a LIE”, if you don’t get it). Israelis were targeted by Hamas and IDF acts to protect them.Change it IMMEDIATELY!!! @IsraelMFA pic.twitter.com/pqjXuopXgO

A short while after the tweet, the BBC slightly changed the headline of the piece, although there was no indication that this was due to the protest. The Board of Deputies claim the headline was changed after they raised the issue.

According to the Times of Israel, Israel’s London Embassy will still be lodging a formal complaint against the BBC because the original tweet is online and has not been removed despite the change in wording.

We also think the new headline fails to tell the full story. The BBC are highlighting just two of the victims in order to paint Israel in a bad light rather than reporting on the bigger picture to give a more balanced view of the situation. They have chosen the side of the terrorists over Britain’s ally Israel.