Hezbollah: Why the UK Government is weak, compromised, misguided and wrong 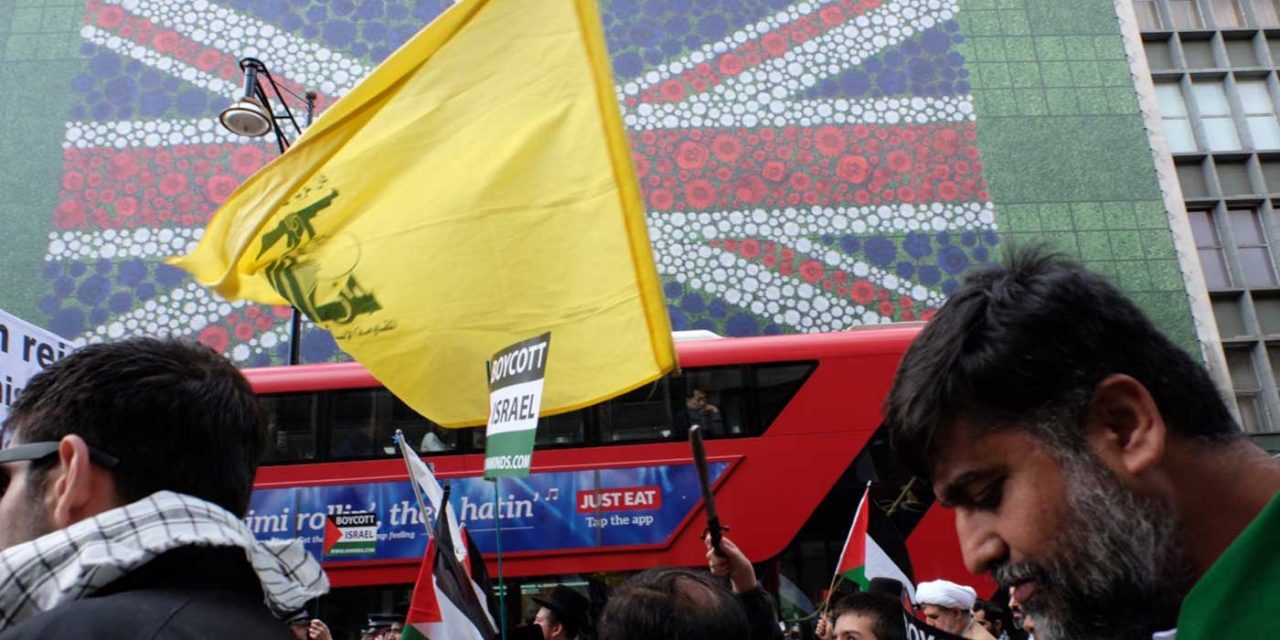 OPNION: Why the UK Government is weak, compromised, misguided and wrong about Hezbollah

Yesterday a two-hour debate took place in the House of Commons regarding the full proscription of Hezbollah in the United Kingdom.

Currently the UK government has banned the “military wing” of Hezbollah, however they have allowed the so-called “political wing” to remain active.

This distinction between the two wings is a fallacy. The organisation itself does not differentiate between the two. This division of the organisation was created by Western politicians in an apparent attempt to show they were “serious about tackling terrorism” while at the same time trying not to offend those same terrorist groups or the countries supporting them.

Unfortunately, the UK government’s weak approach when dealing with Hezbollah has allowed the support for this terror organisation on the streets of the Britain. The Hezbollah flag is regularly seen in anti-Israel marches. The most notable being the Al-Quds march in 2016, where hundreds of flags were waved, sparking calls to ban the flying of the Hezbollah flag.

CUFI UK took it further by leading the calls for the organisation to be banned in its entirety. More than 16,000 people have so far signed the CUFI petition to ban Hezbollah, and we believe it is the support shown for this petition that has given confidence for others to join in calling for Hezbollah to be banned fully.

WATCH: Hezbollah is a terrorist organisation, driven by an antisemitic ideology, which seeks the destruction of Israel. It has wreaked death and destruction throughout the Middle East. It makes no distinction between its political and military wings. And neither should the Govt. pic.twitter.com/9EAO7PRM4X

We were excited to see this debate come about, and along with our partners, sent thousands of emails to politicians urging them to attend the debate and to support the motion.

However, before the debate had even taken place, we heard the views of two of the political parties, and the forecast was not good.

The Liberal Democrats showed that their party line was not to support the ban as they wanted to keep dialogue open. A flawed view in our opinion.

An email seen by CUFI from a Lib Dem MP read, “Liberal Democrats are committed to preventing terrorism in all its forms, but simply banning organisations we disagree with will not achieve that goal.”

This view was echoed by Labour whose leadership issued a memo to all its MPs on the morning of the debate urging them not to support the motion saying that “full proscription could be a move against dialogue and meaningful peace negotiations in the Middle East.”

Wes Streeting, Labour MP for Ilford North, said he was “dismayed” by the memo, and expressed his full support for the banning of Hezbollah.

The debate itself was lively, informed and passionate, with MPs from Labour, Conservatives and the DUP all showing their support for the banning of Hezbollah. The consensus from backbench MPs was that Hezbollah was a terrorist group who should be banned in its entirety, without question.

Intelligence agencies around the world have long seen Hezbollah as the biggest terrorist threat in existence, but especially towards Israel and the Jewish people. Hezbollah is backed by Iran, has a larger arsenal of missiles than most countries, with over 100,000 facing towards Israel, and has over 40,000 trained soldiers ready to fight.

Not only is Hezbollah one of biggest threats to Israel, it is also a big threat to Jews around the world. They have carried out terror attacks specifically targeting Jews in Europe, South America, the Middle East and of course inside Israel.

As well as being a military and terrorist threat Hezbollah is also heavily involved in organised crime closer to home. There are reports that Hezbollah is involved in the South American drug trade that funnels illegal drugs into the United States and Europe and other parts of the world.

British citizens are also in very real danger from Hezbollah, especially our Jewish community. Hezbollah says it monitors Jews wherever they are around the world, including the United Kingdom.

Their hatred of the Jews is very real, well documented and has resulted in the deaths of thousands.

“If they [the Jews] all gather in Israel, it will save us the trouble of going after them worldwide.” – Hassan Nazrallah, leader of Hezbollah

These are just some of the many reasons why Hezbollah should be banned. And it should be noted that according to recent polling the British public overwhelmingly supports such a ban.

However, the UK government is ignoring all of this. Like the Labour frontbench, the Conservative frontbench was against a full ban. Mr Ben Wallace, the Minister for Security and Economic Crime, spoke on behalf of the Government and gave the reasons as to why the UK Government will not be banning the terror group.

He repeated some the same political nonsense about engaging with those within Hezbollah who seek “reform” – of which, it should be pointed out, there is no such thing within Hezbollah.

Jennifer Gerber, Labour Friends of Israel director, said clearly, “It is utterly delusional to think that, having wreaked death and destruction throughout the region, Hezbollah can play any role in promoting peace.”

Mr Wallace stressed that the UK government did not wish to damage ties between the UK and Lebanon, stating that a ban could do such a thing. This is despite the fact that the USA still maintains relations with Lebanon even though they have banned Hezbollah entirely.

Mr Wallace’s response to a question on this was that while the United States maintained relations, they did not have such a good relationship as the UK supposedly has with Lebanon.

However, what Mr Wallace fails to understand is that a good relationship with Lebanon is not as important as protecting the British public or defending our ally, Israel, against terrorism.

He referred to his visit to Lebanon in June 2017, stating that he met with the Lebanese government, Lebanese armed forces and other agencies, including the United Nations. He then went on to stress that the government wanted to see a “strong Lebanon” which they saw as one of the ways to “weaken Hezbollah”.

This is all well and good, until you realise that his visit to Lebanon was in June 2017. After his visit, the Prime Minister of Lebanon fled the country because of Hezbollah’s growing influence on the government. He has since returned, but the points remain the same.

Mr Wallace also said that “the British Government assists with aid, help to train the Lebanese army, so that it can defend the state” – clearly this is part of their hopes to see a stable Lebanon.

However, in November last year the head of the Lebanese Army stated that it was in “full readiness” to face the “Israeli enemy”. So the UK government just confirmed it is effectively arming and training the Lebanese army in order to “weaken Hezbollah”, when in fact Hezbollah’s influence over the Lebanese government has reached a point where the two are now intertwined.

The politically correct naivety of our government is showing once again that instead of working to counter terrorism, they are in fact aiding it. Instead of defending Israel against those who want to destroy her, they are in fact enabling, arming and training them. They have in fact strengthened Hezbollah and are continuing to do so.

Behind all of this is another player, Iran.

The British government has stood by its support for the disastrous Iran Nuclear Deal of 2015, which gave billions of pounds to the Iranian regime, the world’s largest sponsor of terrorism.

This deal was another attempt by the politically correct to appease those who seek to destroy Israel and the West.

It could be that it is, in fact, Iran whom the British government are trying not to upset. After all, Iran has now got lots of money with which to trade, and in their minds, hopefully with the UK. We have seen our government cosy up to the Iranian regime in recent years under the false illusion that “Iran has changed”.

Despite all the positives that were said in the debate, in the end it is hard to be positive about our government’s position on Hezbollah.

Despite 81% of the UK public supporting a full ban of Hezbollah. Despite all MPs involved in the parliamentary debate on the issue supporting the ban of Hezbollah. Despite high level military officials supporting the ban. And despite the fact that Hezbollah is the most dangerous terror organisation in the world, which is hell bent on destroying one of our most cherished allies, Israel, and is responsible for killing Jews around the world, as well over 1,000 British and American troops in the Middle East – despite all of these things – the front benches of both Labour and the Conservatives have refused to support the ban of Hezbollah.

The UK government’s response is weak, compromised, misguided and wrong. It allows support for the terror group to flourish on our streets, it compromises the security of our own people, and it strengthens the terrorist’s hands against our cherished ally Israel, all for the delusion that we can make peace with terrorists.

The government must change its stance on Hezbollah.