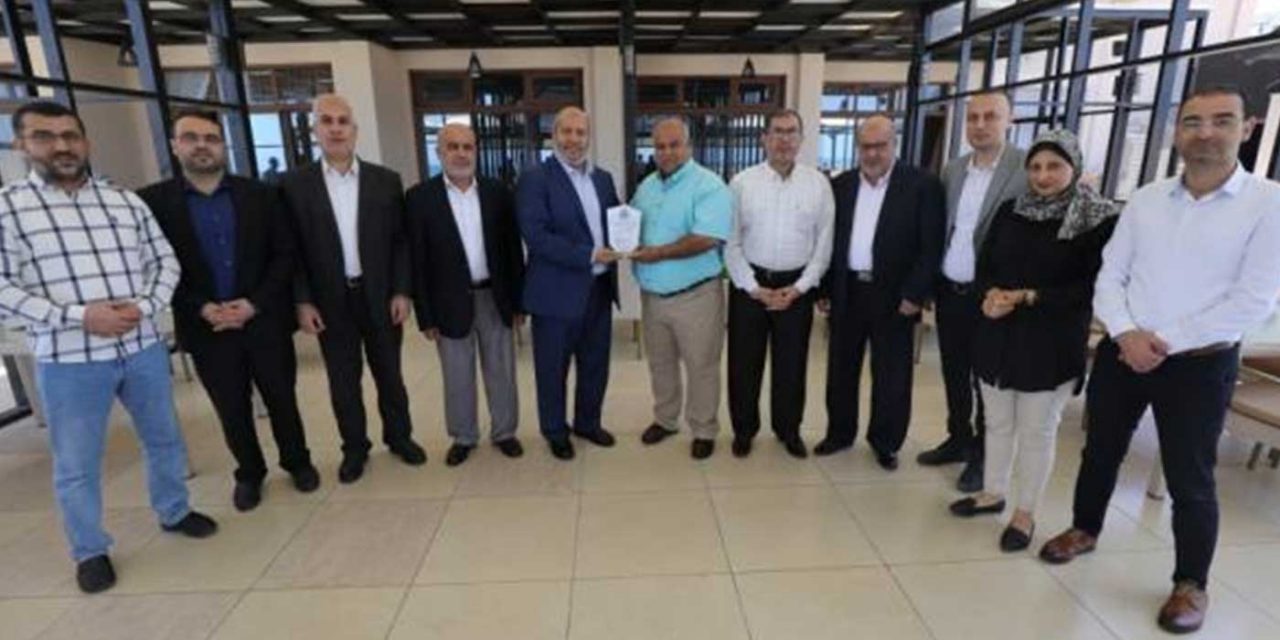 Anyone who has stumbled upon an Al Jazeera article or watched an AJ+ video can see the anti-Israel bias at the heart of their journalism. The Qatari based media outlets have long been downplaying the actions of Hamas while attacking Israel. It is not surprising then that Hamas is now honouring the group.

A delegation from the Hamas terror group paid a visit to the temporary bureau of Al Jazeera in Gaza Thursday, lauding the Qatari news agency for its coverage of the recent conflict between Israel and terror groups the Strip.

Hamas deputy chief in Gaza Khalil al-Hayya told Al Jazeera reporters that they “demonstrated their belonging to the cause of the oppressed Palestinian people,” according to a statement from the group.

“What distinguishes the Palestinian journalist [from others] is that he has a national message,” Hayya said. “We saw a high level of nationalism and a national tone in Al Jazeera’s coverage.”

The senior Hamas official also lauded the agency’s “high professionalism” and noted the sacrifice of its reporters, whose office was levelled by the IDF on the fifth day of the 11-day conflict.

It should be noted that Hamas was operating from inside the same tower block as Hamas. Israel has provided evidence to the Associated Press (AP) in American which was also housed in the same building. Israel says Hamas had been using several offices in the al-Jaala media tower, including one where operatives were working on technology that could jam the Iron Dome missile defence system. This risked a severe threat to civilian life in Israel as the Iron dome was intercepting 90% of the 4,000+ rockets fired by Hamas into Israel, all of which were directed at Israeli civilians.

Israel gave sufficient notice to journalists, residents and even the terrorists of Hamas to exit the building before it would be destroyed. No one was harmed in the strike.

The Qatari news agency has long been accused of having an anti-Israeli, anti-American slant in its coverage.

Qatar provides funding to Hamas and the terror groups political leader, Ismail Haniyeh, currently lives in Qatar and was hosted by the government during the last round of conflict.

Al Jazeera is not directly owned by Qatar, but it was started with a large loan by the countries leader and there has been a number of incidents over the years where the Qatari government have influenced journalistic decisions within the organisation.

Sadly, this anti-Israel media outlet is still allowed to function in most countries, including the UK, despite its close links with Hamas.

Al Jazeera also runs a youth-focused media site AJ+ which has tens of millions of young followers online, particularly from the West. It appears to be liberal, spreading positive messages about the LGBT community and other interests young people have, but in between these messages distributes hardline anti-Israel propaganda and anti-Western messaging. Many young people, even in the UK, are deceived by this tactic.

Hopefully, this latest news will open the eyes of people that Al Jazeera and AJ+ are not trusted sources of news and information when it comes to Israel and the Palestinians.