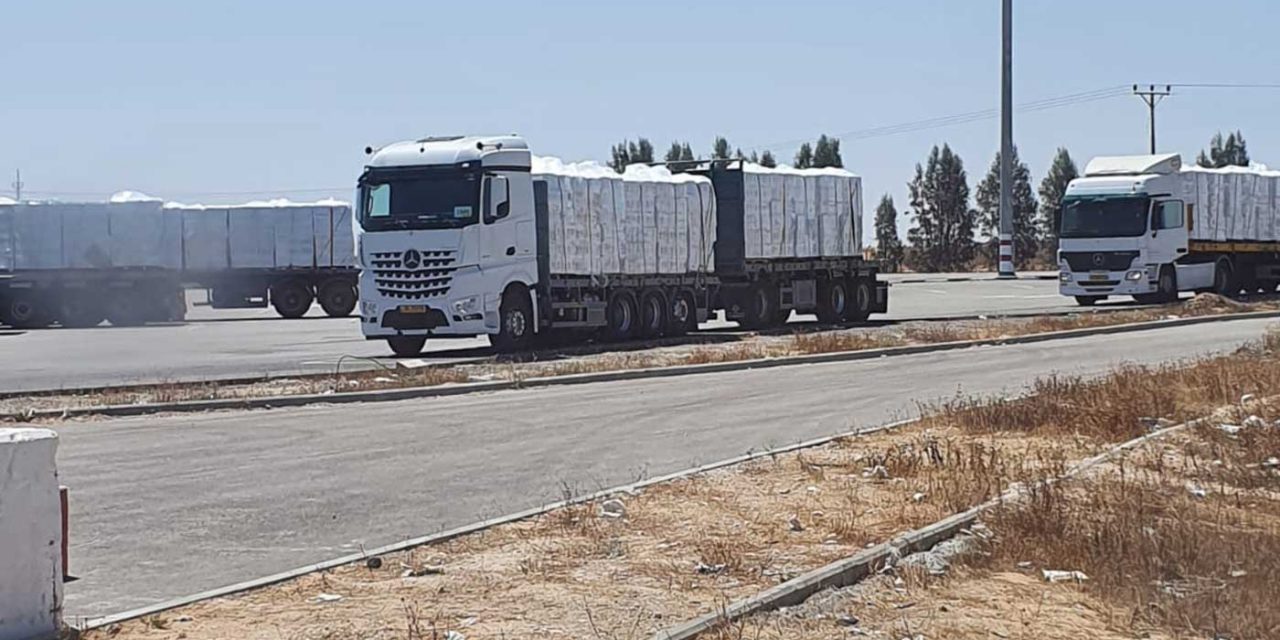 The Hamas terror organisation has proven once again it is doing more to harm the lives of Palestinians than help them after terrorists fired rockets directly at a civilian aid convoy entering Gaza earlier in the week, wounding an Israeli soldier and halting the crossing of aid to Palestinians.

Magen David Adom (MDA) medics and paramedics provided medical treatment to a 19-year-old soldier and transferred him to Ashkelon’s Barzilai Medical Center in stable condition with a shrapnel wound to his upper body.

1/2 Today, during the entry of a humanitarian shipment from Jordan into the #Gaza Strip through the Kerem Shalom crossing, Hamas fired mortar shells at the area and the shipment entry was halted.

This incident follows yesterday’s disruption of the humanitarian shipment by Hamas. pic.twitter.com/HtU0yqfXFX

The soldier’s unit was overseeing the distribution of humanitarian aid to the Strip, as Israel reopened the Kerem Shalom border crossing to allow for the transfer of gas, food and medicine to Gazan residents.

The IDF said that the mortars struck as a convoy of trucks carrying aid donated by international aid organizations was crossing into the coastal enclave. At least one mortar shell hit the Erez Crossing while several others were fired at the Kerem Shalom Crossing. Following the attack, the IDF suspended the entry of the rest of the trucks.

Just after Israel re-opened the Erez Crossing from Israel into Gaza to allow the entry of civilian aid, a mortar shell was fired at the crossing from Gaza, lightly injuring an IDF soldier.

Hamas prioritizes attacks on Israel over humanitarian aid for Gazans.

The border was closed from last Sunday following violent protests at the border from a group within the Gaza Strip.

This latest attack shows that while Israel is willing to help the civilian population of Gaza and deliver much needed medical aid, Hamas are doing all they can to hurt the lives of Palestinians living under their control.

During the 2018 border clashes, Hamas routinely attacked the border crossing and even set fire to the main oil and gas pipeline into Gaza. These attacks were attempts by the Hamas terror group to cause problems for its own population which it could then blame on Israel and incite more people to amass at the borders.

It is unclear why Hamas decided to attack aid convoys into Gaza on this occasion. They may have seen an opportunity to hurt Israeli soldiers, or simply wanting to cause more misery for their people which they can use to incite against Israel. Hamas tightly controls Gaza and news coverage inside the area is closely monitored by the group, meaning Palestinians living in Gaza will never hear about these actions from Hamas that hurt them.

The incident has caught the attentions of politicians here in the UK with Conservative MP Greg Smith raising the incident with Middle East Minister James Cleverly.

This is the truth. This is Hamas

Mr Smith asked Cleverly to join him in “condemning this appalling incident which further shows… that the actions of Hamas are categorically not in the interests of Palestinian people.”

MP James Cleverly responded that “the targeting of civilians… is unacceptable. The specific targeting of humanitarian support particularly so.”

He confirmed that the UK government “has asked Hamas and other terror organisations (in Gaza) to cease their targeting of humanitarian access routes so that our support and the support of the international community can get to the people who need it.”