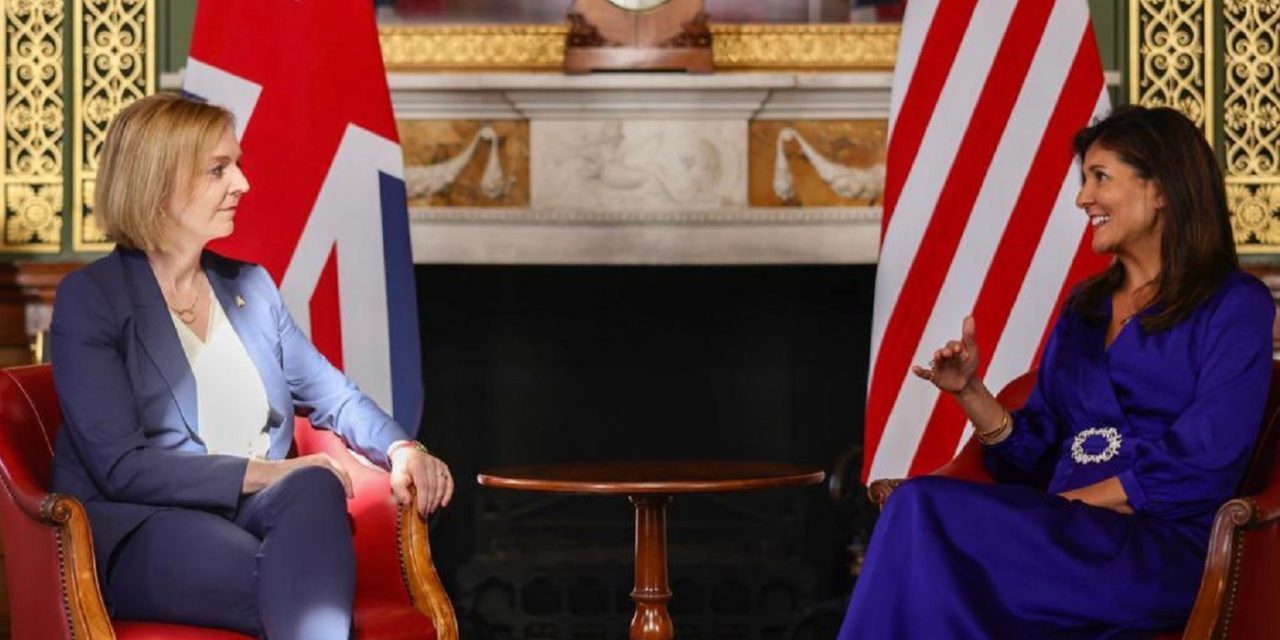 Nikki Haley has said we’re at a ‘Churchillian moment’ in dealing with the threat from regimes such as Iran.

The former US ambassador to the United Nations was speaking during a visit to the UK this week, during which she also squeezed in a meeting with UK Foreign Secretary, Liz Truss and Home Secretary, Priti Patel.

In a speech at Policy Exchange in London, Haley said Russia’s invasion of Ukraine should awaken the world to an even greater threat: that of a burgeoning global “axis” uniting the dictatorships in Russia, China and Iran.

Attacking what she described as western appeasement, Haley said, “We are living in a Churchillian moment that calls upon our leaders to do as Churchill did. To see the coming threat before others do; to warn our citizens early, often, and with clarity; and to rally the free world to meet the threat head-on.”

Haley said, “This is a clash of civilizations — a classic struggle between light and darkness, good and evil, right and wrong. We need look no further than the streets of Mariupol, Hong Kong, and Tehran for proof.”

In her speech, Haley addressed the failed Iran nuclear deal (JCPOA) which Western powers and Tehran are keen to revive, but have currently stalled over Iran’s wish for the IRGC to be removed for the US terror list.

“The JCPOA has been a disaster, and must not be revived. The appeasement of Iran’s brutal regime must end,” Haley said.

Whilst in London, Haley met with Foreign Secretary Liz Truss, posting a photo on Twitter and saying, “Great conversation with UK Foreign Minister Liz Truss. We discussed our shared values, continuing to support Ukraine in the face of Putin’s aggression, and the challenges we face-from Russia to China. Free countries must stand strong to deter our enemies.”

Haley also met with the UK ambassador to the UN, a number of Parliamentarians, and Israeli ambassador, Tzipi Hotovely.

Great conversation with UK Foreign Minister @trussliz. We discussed our shared values, continuing to support Ukraine in the face of Putin’s aggression, and the challenges we face-from Russia to China. Free countries must stand strong to deter our enemies. #SpecialRelationship🇺🇸🇬🇧 pic.twitter.com/fL8aflZM0r

I was delighted to welcome former US Ambassador to the UN @NikkiHaley to the @UKHomeOffice today.

We covered a whole range of issues and found a great deal on which to agree – including the importance of strong 🇬🇧🇺🇸 relations to protect the shared values our nations hold dear. pic.twitter.com/G7S0Wsvgew

It was great to meet former US Ambassador, @NikkiHaley, here in London. Nikki is such a great friend of #Israel and is always a strong advocate for our shared values. I was fascinated to hear her thoughts on foreign affairs.

Great pleasure to be with Ambassador @NikkiHaley at @Policy_Exchange last night. Intelligent, direct and downright nice. A formidable combination and a great advocate for the #SpecialRelationship. 🇬🇧🇺🇸 pic.twitter.com/TxMjaorSf5

Fun times catching up with @MatthewRycroft1!

The people of the UK are lucky to have him fighting for them! #SpecialRelationship 🇺🇸🇬🇧 pic.twitter.com/Y8FWpz6dcd