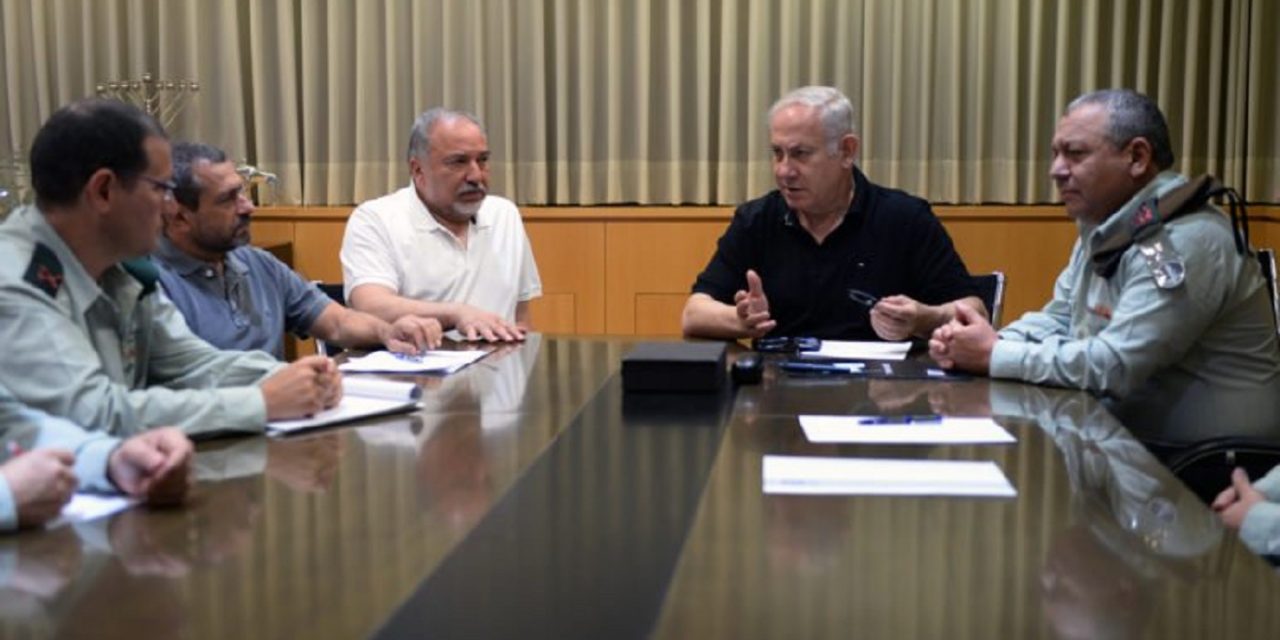 Israel’s high-level security cabinet on Thursday instructed the military to “continue acting forcefully” against terror groups in the Gaza Strip, after Hamas fired over 150 rockets into southern Israel prompting the IDF to target terror positions in largest exchange of fire since the 2014 war.

After a four-hour meeting, the Cabinet issued a short statement, saying it had directed the army “to continue taking strong action against the terrorist elements.”

Lt. Col. Jonathan Conricus, a military spokesman, said Israel had “ground troops that are ready to deploy. We are reinforcing the southern command and Gaza division.” He wouldn’t comment on Israeli media reports of troops preparing for a possible ground operation.

The statement from the senior government panel came as Al-Jazeera reported that an Egyptian-mediated ceasefire deal between Israel and Hamas had been reached and went into effect at 10:45 p.m.

An Israeli official swiftly denied the report and said no such deal had been clinched.

Prime Minister Benjamin Netanyahu convened the security cabinet on Thursday evening to discuss the violence in the south, as IDF jets flattened a five-story building in the Gaza Strip it says served as a headquarters for Hamas’s internal security service.

“The [security] cabinet instructed the IDF to continue acting forcefully against terrorists,” a statement from the Prime Minister’s Office said at the conclusion of the meeting.
An Israeli official told reporters Hamas has been seeking an Egyptian-mediated ceasefire throughout the day on Thursday, after an earlier truce that went into effect in the afternoon was breached after some two hours. In the absence of a deal, Israel was able to target “valuable” Hamas military targets in Gaza, the official said.

The terrorist group was reportedly eager to cut a deal with Israel, with negotiations via Cairo said to be ongoing throughout Thursday night.

Earlier on Thursday, the IDF said in a statement its airstrike on the building in northern Gaza came in response to Hamas rocket fire that was launched deep inside Israeli territory. The statement said the building was the headquarters for Hamas’s internal security service, which served as the “operational arm” of the terror group. The building also served as a cultural center.

It was not clear if the escalation of hostilities, the latest in a series of intense exchanges of fire in recent months, would derail the indirect ceasefire negotiations between Israel and Gaza’s Hamas rulers.

Channel 10 news reported Thursday there was a “growing understanding” in the defense establishment that reaching a ceasefire deal with Hamas was impossible, and that Israel must launch a full-fledged military operation to restore calm. The report said the IDF was mulling a short but intense operation targeting some the more affluent neighborhoods in Gaza City to exert the maximum pressure on the Hamas leadership. It said any military campaign in Gaza would not ultimately seek to oust Hamas, but force the ruling terror group to agree to an understanding with Israel.