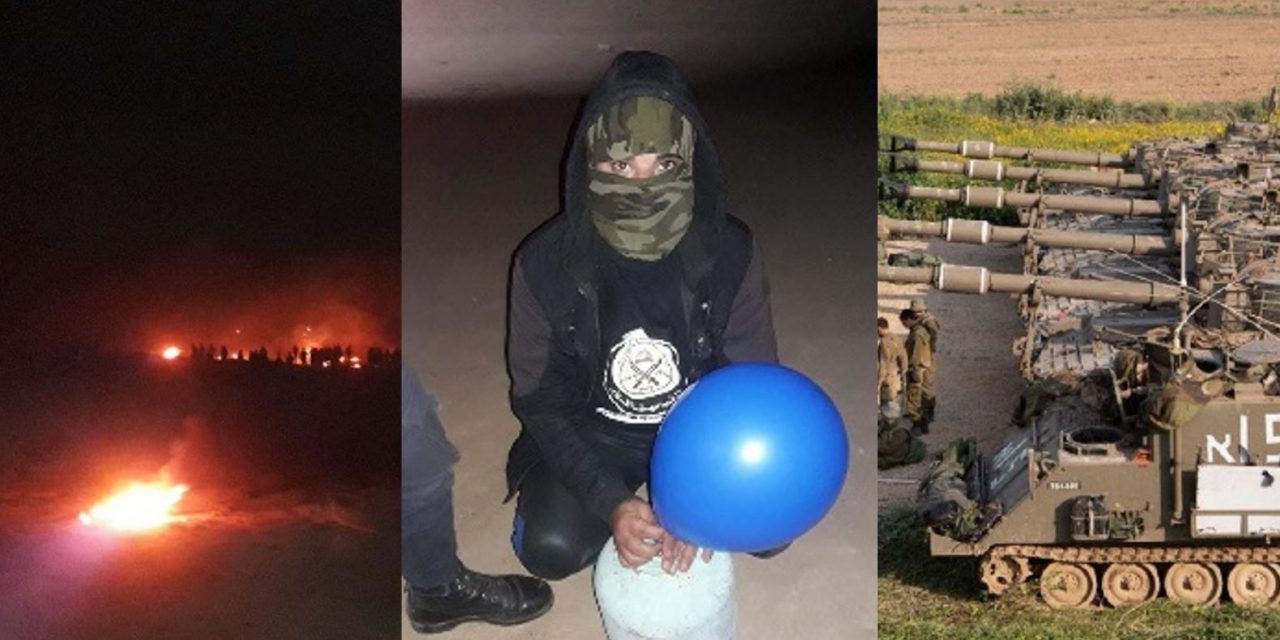 Palestinian rioters have started their violent assault on Israel’s border with Gaza ahead of this weekend’s so called ‘million man march’.

Some 500 explosives were thrown at the IDF throughout Thursday night, according to Mivzak Live. Tensions have been high at the border since a rocket fired by Palestinian terrorists hit a home in central Israel on Monday.

Video: Palestinian rioters on Thursday night at the border

Friday marks  exactly one year since Hamas began its weekly Gaza border riots and attacks, the so-called “March of Return.”

On Wednesday, Hamas leader Ismail Haniyeh called for a million-person march on Israel’s border on Saturday, but Israel is prepared for violence to continue to build over the coming hours having stationed extra ground troops along the border.

The IDF is now on high alert, streaming heavy re-enforcements to the border, including an armoured division and artillery, preparing for what could be a violent few days.

Hamas is planning a mass transportation operation for Saturday, picking up protesters from 38 locations in the enclave and shuttling them to five sites along the border.

The Hamas-run education ministry in the Gaza Strip cancels school on Saturday to allow school children to participate in the mass border protests that are expected over the weekend.

This weekend, Hamas is planning to send terrorists among thousands of rioters in Gaza to storm Israel’s border, breach the fence, & kill Israeli families living a mere 5 minute walk from the onslaught. Our duty is to protect Israeli civilians. Our duty is to #StopHamas

“Bulldozers have prepared the grounds of the rally, put up tents, even distributed a special budget so participants get free food. There’s even wifi for the protesters, so that they can post things quickly to social media. Hamas has prepared infrastructure for a wide media operation, which is expected to broadcast live. The goal: to show Palestinians being wounded in the protests,” reports the Ynet news site.

ID tweeted Friday morning, “This weekend, Hamas is planning to send terrorists among thousands of rioters in Gaza to storm Israel’s border, breach the fence, & kill Israeli families living a mere 5 minute walk from the onslaught. Our duty is to protect Israeli civilians. Our duty is to stop Hamas.”

This week, Hamas fired dozens of rockets at Israeli civilians.

This military will put a stop to Hamas terror. We have reinforced our soldiers in southern Israel. pic.twitter.com/Mk5PU7Rrg1

IDF says it is completing preparations for protests along the Gaza border planned for Saturday, Palestinians’ Land Day, and the outbreak of violence that is feared to coincide with them.>>> pic.twitter.com/7ziKdBn686

Egyptian mediators are apparently meeting with senior Hamas officials in a last-ditch effort to reach a ceasefire deal with Israel before Saturday’s march.

“I urge our Palestinian people in Gaza, the occupied West Bank and abroad to march on Palestinian Land Day and take part in One-Million Demonstration of Land and Return next week,” Hamas leader Ismail Haniyeh said in a press release.

Israel: U/D Clip, IDF fully mobilized at the Gaza border, violent protests expected over the weekend, additional snipers positioned to prevent infiltration, security officials are hoping for the best but preparing for the worst pic.twitter.com/T57UWgO1pW

Since the organised cross-border violence began last March,  some 2,200 terror-related incidents have been recorded, including 1,233 rocket and mortar attacks, the latest of which occurred earlier this week.

The violence also included 18 incidents of gunfire from the Gaza Strip and 94 Improvised Explosive Device (IED) incidents, during which one or several explosive devices were hurled across the security barrier, and 600 Molotov cocktail attacks.

The video that Hamas doesn’t want you to see this weekend: #StopHamas pic.twitter.com/8tW8Ap7IgN

November 2018 saw the biggest surge in the number of rocket launches from Gaza with 460 confirmed attacks. While over 100 of the projectiles were intercepted by the IDF Iron Dome air defense system, the rocket fire killed one Israeli and severely wounded three others while 123 suffered light-to-moderate injuries.

In addition to these, since January, activities near the Gaza border have been occurring on an almost nightly basis. These include planting explosives in the border area, burning tires and launching projectiles at IDF forces.

These violent attacks on the border have claimed the life of an IDF soldier whereas four were severely wounded and 12 suffered light-to-moderate injuries.

Beyond the attacks on the border fence, arson balloons and kites launched from the Gaza Strip have also caused some 2,000 fires, at times as many as 30 in a single day.

These blazes have caused extensive damage in an area of approximately 35 square kilometers, including 13 sq. km. of nature reserves and 11 sq. km. of forests. The combined damages incurred by Israelis due to rocket fire and arson balloons from Gaza are estimated at NIS 35 million (approximately $10 million).

Gazans claim that more than 250 civilians have been killed and tens of thousands wounded during the last year of border violence. The IDF has proved — and the Hamas leadership has admitted — that the majority of those who have been killed on the border have been terrorists.

Hamas is launching mass riots to commemorate a year since its deadly ‘March of return’ began on the Israel – Gaza border. While many in the media and international community continue to accept the line that these are peaceful protests, that’s simply not the reality. Here ‘protestors’ prepare for the riots by making explosives…….doesn’t scream peaceful does it? #notapeacefulprotest

Posted by Christians United for Israel (CUFI) on Friday, 29 March 2019