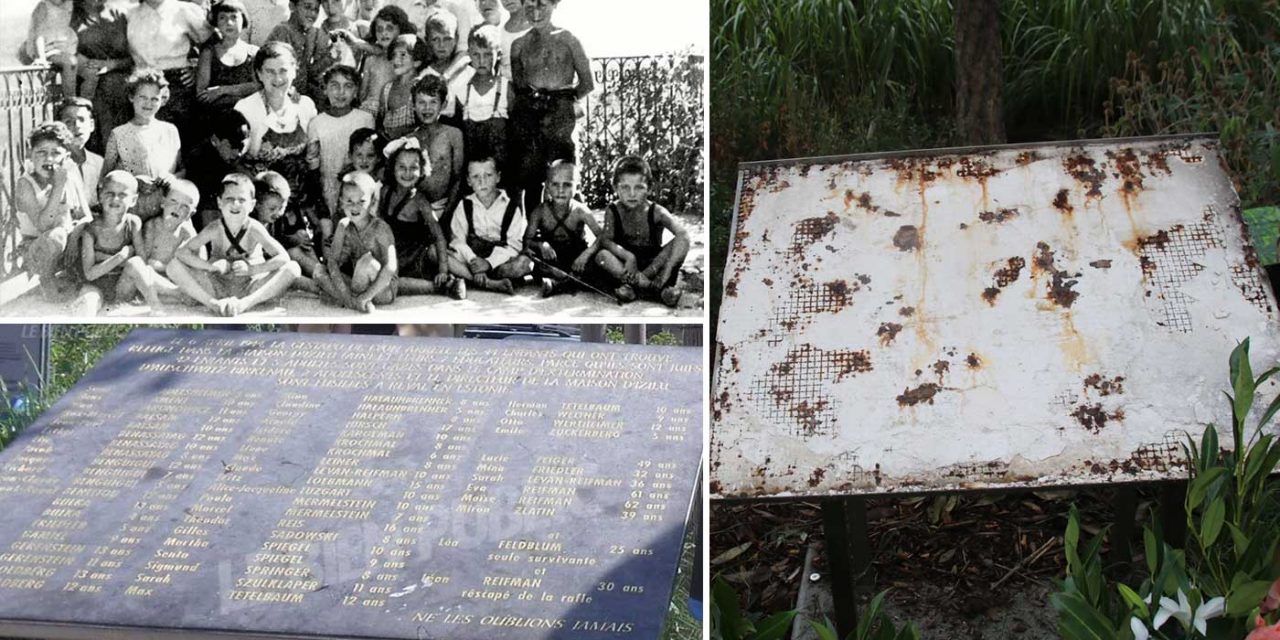 A memorial plaque bearing the names of 44 Jewish children and 7 adults who were deported from France during World War II has been desecrated by vandals.

All of the children were killed in the death camps, most of them in the gas chambers, and only one adult survived.

On discovering the damaged plaque, Jean Levy, head of the charity committed to preserving the memory of these victims said, “We are horrified but we won’t give up. We’ll rebuild it,”

The plaque bore the names of the victims and was broken and removed from its base in a public garden in the city of Lyon.

This act becomes even more despicable when you know the story of the children.

This is the story from the Jewish Virtual Library which includes the name and age of each of the victims.

The sleepy village of Izieu lies overlooking the Rhone river between Lyon and Chambery in central France. The Jewish children, aged between five and seventeen, felt safe and secure, supervised by seven adults.

However, on the morning of April 6, 1944, as they all settled down  in the refectory to drink hot chocolate, three vehicles, two of which were lorries, pulled up in front of the home. The Gestapo, led by the ‘Butcher of Lyon’ Klaus Barbie, entered the home and forcibly removed the forty-four children and their seven supervisors, throwing the crying and terrified children on to the trucks like sacks of potatoes.

As a witness later recalled: ‘I was on my way down the stairs when my sister shouted to me: It’s the Germans, save yourself! I jumped out the window. I hid myself in a bush in the garden. I heard the cries of the children that were being kidnapped and I heard the shouts of the nazis who were carrying them away.’

Following the raid on their home in Izieu, the children were shipped directly to the “collection center” in Drancy, then put on the first available train towards the death camps in the east.

Forty-two children and five adults were gassed in the extermination camp of Auschwitz. two of the oldest children and Miron Zlatin, the superintendent, ended up in Tallin in Estonia and were put to death by a firing squad.

One survivor of Auschwitz revealed during Klaus Barbie’s trial what happened to the children: ‘I asked myself where were the children who arrived with us? in the camp there wasn’t a single child to be seen. then those who had been there for a while informed us of the reality. ‘You see that chimney, the one smoke never stops coming out of . ..  you smell that odor of burned flesh … ?’

Of the forty-four children kidnapped by the Nazis in Izieu, not a single one survived. Of the supervisors there was one sole survivor, twenty-seven year old Lea Feldblum.

Klaus Barbie sent an almost unbelievable recital of the proud accomplishment and success of the action: “This morning the Jewish children’s home ‘Children’s Colony’ in Izieu-Ain was liquidated. Altogether 41 children aged three to thirteen were arrested. Furthermore, it was possible to arrest the whole Jewish staff consisting of ten persons, including five women. Cash or other valuables could not be seized.” In addition it says that the transport to Drancy will take place on 7 April 1944. Signed: Barbie. SS-Hauptsturmfuhrer Alois Brunner transported the children from Izieu to Auschwitz.

In Izieu a young French woman Renee Paillares, an aide at the children’s home in Izieu, succeeded in hiding the three-year-old Jewish refugee child Diane Popowski in her home. The little child, born in 1940 in Luxembourg, did survive the Holocaust.

These are the children from Izieu and their seven supervisors. Lea Feldblum, 27, was the sole survivor.

May their memory be a blessing.