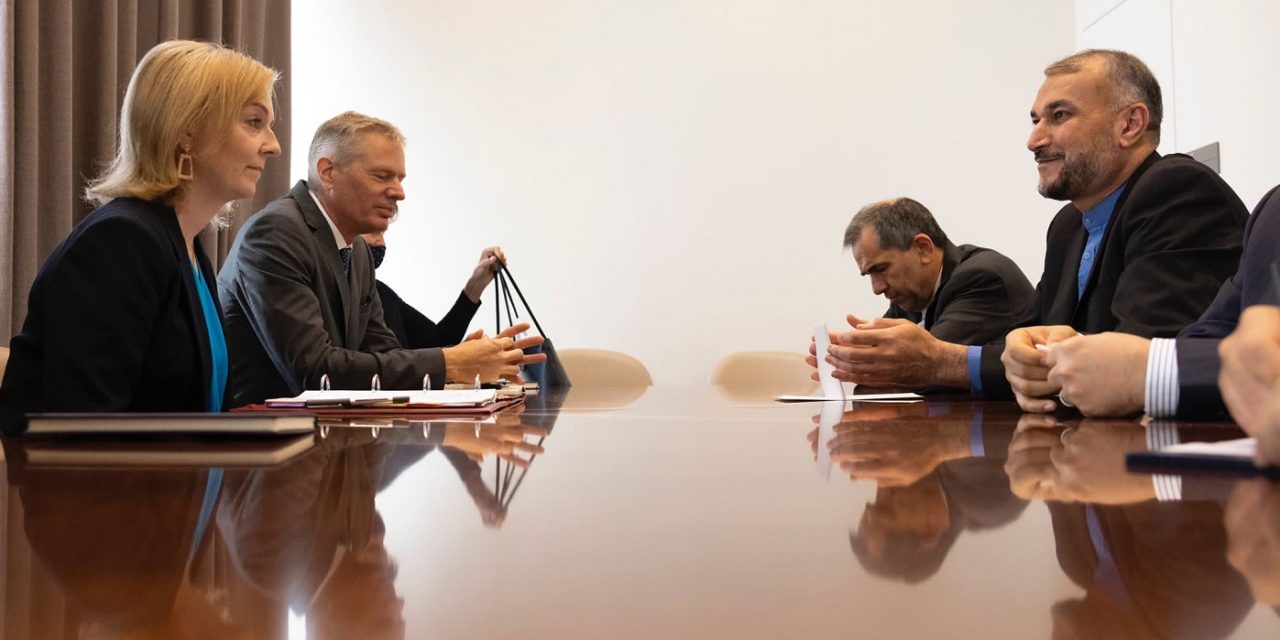 Recently-appointed Foreign Secretary, Liz Truss, said she is ‘absolutely determined’ to secure the freedom of Nazanin Zaghari-Ratcliffe following a meeting with her Iranian counterpart.

Truss tweeted the comment after meeting Iran’s foreign minister Hossein Amir-Abdollahian in New York where she pressed for the release of the British-Iranian mother who has been wrongfully imprisoned since 2016 and also called for a return to nuclear programme negotiations.

It comes as Nazanin Zaghari-Ratcliffe reached her 2,000th day in captivity, despite her five year sentence finishing earlier this year. Her husband used the milestone to urge Boris Johnson to rethink his approach to Iran.

After the meeting at the UN General Assembly in New York, Truss tweeted a picture and said: ‘I’m absolutely determined to secure the release of detained British nationals.’

👉 And I want to bring Iran back to the table on the nuclear deal and return to Vienna talks pic.twitter.com/ceoWP7dS0v

A source close to her said she had ‘pressed hard’ for the release of Mrs Zaghari-Ratcliffe and other detainees.

Earlier in the week, Trust said: “I’ve already spoken to the families of the detainees in Iran.

“It’s completely unacceptable that they’re being held there and I’m going to be very proactive in pushing for their release.”

When asked what she would say to the Iranians, she said she would be pushing for Ms Zaghari-Ratcliffe’s “immediate release”.

Husband Richard Ratcliffe said: ‘After 2,000 days of disappointments and let-downs, I do sometimes wonder what will get the Government to bring Nazanin and the others home?

‘What will end the years of drift, or get the Prime Minister to deliver on his word?’

She is going through an appalling ordeal. We are working tirelessly to secure her return home to her family.

The British Foreign Secretary also urged Iran to return rapidly to the Joint Comprehensive Plan of Action (JCPOA) negotiations in Vienna with a view to all sides coming back into compliance.

The call is consistent with remarks made by President Biden this week at the UN Generally Assembly in which he said, “We are working with the P5+1 to engage Iran diplomatically and to seek a return to JCPOA. We’re prepared to return to full compliance if Iran does the same.”

The President’s comment indicates that his administration’s earlier statements expressing a desire for a “longer and stronger” agreement are not reliable. Moreover,the Biden administration either does not fully understand America’s adversaries in Tehran or is blatantly ignoring the perils associated with continuing such an approach, all in an effort to achieve a hollow and dangerous political victory.

Britain and America must and can do better than a return to a nuclear agreement that enabled Iran to surreptitiously maintain its nuclear program, openly support terror, develop more capable long-range missiles, buy weapons on the open market and subjugate its own people.