Exeter NUS candidate suspended after he congratulated Netanyahu on election 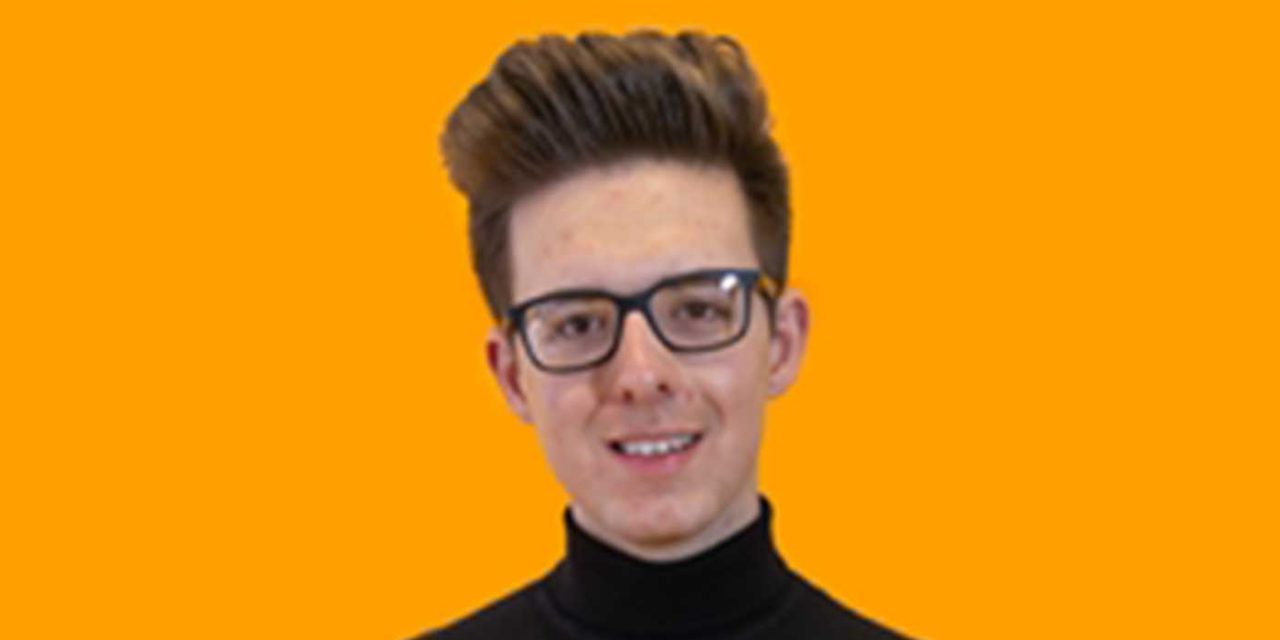 The National Union of Students (NUS) suspended an election candidate while it investigated a complaint that he praised Benjamin Netanyahu’s election victory on stage.

University of Exeter undergraduate Jack Morewood, who is running to be Student Director, made the comment during a panel at the NUS conference on Wednesday.

The NUS lifted the suspension after giving him a verbal warning.

The video shows Mr Morewood speaking on stage and at the end of his remarks said, “Congrats to King Bibi, big mazeltov to him for his successful re-election in Israel yesterday”.

“Bibi” is the nickname of Israel’s Prime Minister Benjamin Netanyahu.

Morewood’s comments drew a chorus of boos and shouts of “Free Palestine” (see video below).

Hero of the day!This is Exeter university student Jack Morewood addressing the NUS conference today – one of the most antisemitic, anti-Israel organisations in the entire U.K. Jack Morewood, we salute you.UPDATE: It seem that to the hate filled bigots of the NUS, wishing Bibi 'mazel tov' is reason to have your campaign suspended yet shouting 'Free Palestine' should be welcomed! Says far more about them than it does about us and shame on them for it. Thanks to @Israellycool for this update:https://www.israellycool.com/2019/04/11/candidacy-of-exeter-student-jack-morewood-suspended-for-congratulating-bibi-at-nus-conference/?fbclid=IwAR2W5Oh_MXiQBxfvyVW_AbBeD6nzDCX07j8zR3z1cgGXipTndmTPkWuK5rI

Posted by Sussex Friends Of Israel on Wednesday, 10 April 2019

On Twitter, someone shared a video of his remarks and the reaction, urging the University of Exeter to not “let your student, Jack Morewood, who’s running for public positions within your university and NUS, run.”

The person went on to say, “The comment congratulating a FAR FACIST [sic] LEADER is absolutely disgusting, and as you can hear, A LOT of upset was caused. Please take action against him”. 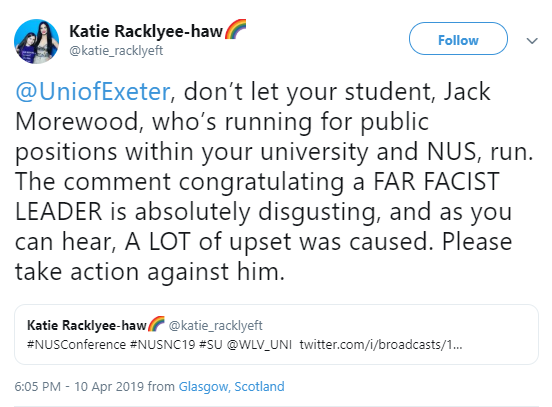 The same person shared a screenshot of the NUS’ response to a formal complaint, which set out that the chief returning officer has the right to suspend a candidate or withdraw them from the election.

The response added the NUS had “taken the decision to suspend the candidate in question until such a time as the DPC has made a decision regarding the breach of the code of conduct”.

The NUS confirmed that “following completion of that code of conduct investigation earlier today, Jack Morewood’s suspension was lifted and he is, therefore, a candidate in the elections taking place today”.

The Jewish Chronicle reached out to Mr Morewood who said he is “now unsuspended and [has] received a verbal warning” and said there had been protests against him during his election speech on Thursday morning.

Meanwhile, the NUS has elected its new president this week who has some rather interesting viewpoints:

The incoming president of the National Union of Students has said that she wanted to “oppress white people” and have an “Islamic takeover”.

Using the hastag #IfIWasPresident, she wrote on Twitter in 2012: “I’d oppress white people just to give them a taste of what they put us through!” She signed off the message by writing “LMFAO”, which in urban slang is short for “Laughing My ******* Arse Off”.

Responding to questions online about what book everyone should read, she said: “The Quraan. We would have an Islamic takeover!”

In another question about friendship between men and women, she wrote: “I’ve had this debate with many friends! Maybe in some cases but Islamically it’s incorrect for girls to be friends with a guy anyway! So I’m gonna say NO not the kind of friendship they can have with the same gender there is always boundaries.”

Ms Ibrahim, was elected as NUS president at their annual conference this week, said that her remarks should not be taken “out of context” and they were from a time when she was “struggling” with her view of the world.