Danny Danon: “If Hezbollah attacks, we will bury it in the rubble of Lebanon” 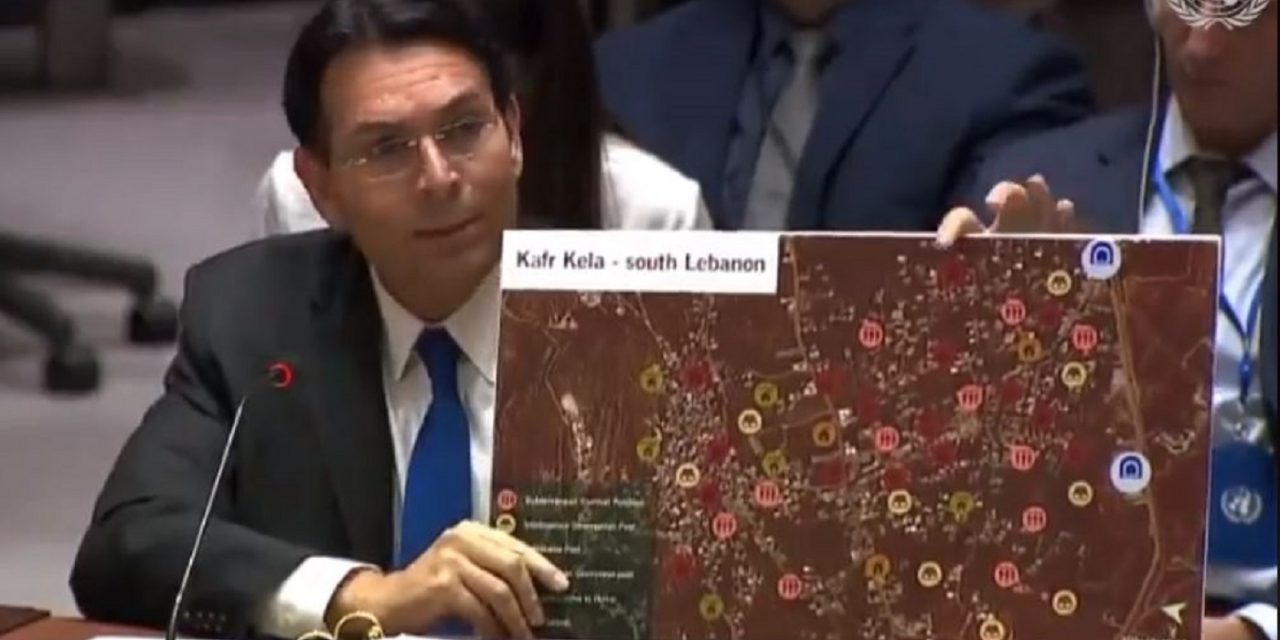 On Wednesday, the United Nations Security Council held a special session on Hezbollah’s violation of Resolution 1701, and specifically the terror group’s cross-border attack tunnels that were exposed by the IDF as part of Israel’s Operation Northern Shield.

WATCH-Ambassador Danny Danon's blistering address to the U.N Security Council during the session just now on the Hezbollah terror tunnels coming from Lebanon

Posted by Sussex Friends Of Israel on Wednesday, 19 December 2018

At the session, Israeli Ambassador to the UN Danny Danon revealed to the Security Council members an aerial photograph of a “private compound” in Kfar Kila, about 80 meters from the Blue Line, which separates Israel and Lebanon.

This was the location from which an underground attack tunnel crossed into Israel, not far from a UNIFIL observation post.

Danon commented on the discovery, “Israel gave UNIFIL precise information about the location of the tunnel. After UNIFIL told the Lebanese army, [the UN force] was then stopped when it tried to reach the area. Sources within the Lebanese army informed Hezbollah about the information, which enabled the terrorist organization to conceal the tunnel’s operations and thwart Israel’s defensive actions.”

“Lebanese army officials are working for Hezbollah, while UNIFIL is not working to fulfill its mandate in the region in the necessary manner,” added Danon.

Danon continued, “Let me be abundantly clear — Hezbollah’s activities are a flagrant and unacceptable violation of Security Council Resolution 1701 and the ‘Blue Line.’ They also violate the UN Charter and international law.”

Danon explained, “Hezbollah has built a terror base inside a civilian population, with its end on the Israeli side of the border, all financed by Iran. This not only a clear violation of Resolution 1701, but Hezbollah also uses Lebanese civilians as human shields.”

“If Hezbollah will have the arrogance to attack Israel, we will bury it in the rubble of Lebanon,” Danon warned. “We will never let terror win.”

“The international community must condemn Hezbollah in the strongest terms and stand by Israel’s self-defensive measures,” he continued. “It is the expectation that Lebanon will eliminate these terror tunnels and prevent the building of future attack tunnels that threaten Israel.”

Danon spoke after his Lebanese counterpart, Amal Mudallali, condemned Israel in her own remarks to the council over what she described as a continuing array of encroachments on her country’s sovereignty.

Addressing Mudallali directly, Danon accused her of representing “a government that allows Iran and its proxies to turn Lebanon into a launching pad for terror.”

“If Hezbollah will have the arrogance to attack Israel, we will bury it in the rubble of Lebanon,” Danon warned. “We will never let terror win.”