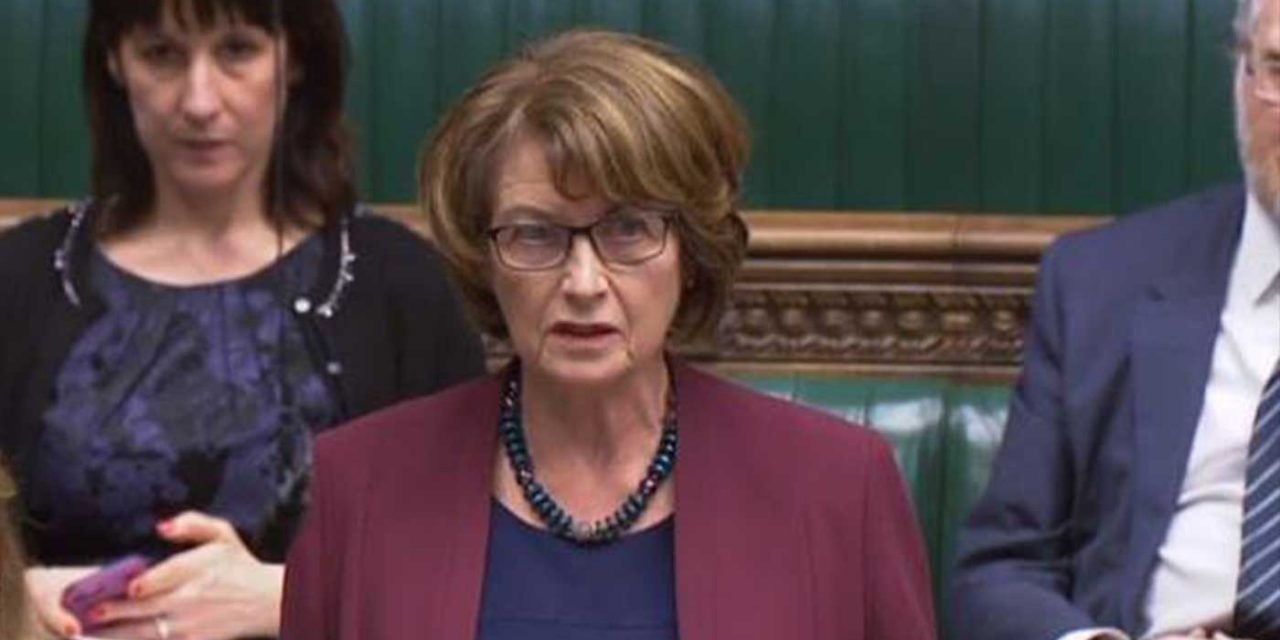 Dame Louise Ellman has spoken of the “scandal” of UK taxpayers money being used by the Palestinian Authority to incite violence and terror against Israelis.

Ellman, who is the vice-chair of Labour Friends of Israel and the MP for Liverpool Riverside, was speaking as she introduced her International Development Assistance (Values Promoted in Palestinian National Authority Schools) Bill to the Commons on Tuesday.

She told the House of Commons that young Palestinian minds were “being poisoned” and “the opportunity for Britain to help promote the values of peace, reconciliation and coexistence squandered.”: “This is not about a peaceful future. It is a scandal.”

Watch and read the full speech below:

I beg to move,

That leave be given to bring in a Bill to prohibit international development assistance to schools operated by the Palestinian National Authority that do not promote values endorsed by the United Nations Educational, Scientific and Cultural Organization; to require the Secretary of State to publish an annual report on the extent to which such development assistance for schools operated by the Palestinian National Authority supported the promotion of those values; and for connected purposes.

I know from the many speeches that I have delivered in this House on this topic that the conflict between Israel and the Palestinians provokes strong passions. Tragically, the past five years have seen the total absence of a political process that brings both sides together to make painful but necessary compromises to resolve this conflict. There is still vital work that we can do to strengthen the civic society foundations on which any lasting settlement must be built. We must recognise the threat posed to these peace-building efforts by those who incite hatred, glorify violence and promote terror. The reality is that the Palestinian Authority is at the heart of this threat. We can no longer turn a blind eye to what British aid is helping to foster: not the infrastructure of a democratic, independent and peaceful Palestinian state, but a body promoting values that are inimical to the establishment of that state.

My right hon. Friend Joan Ryan suggested in her debate last July that “it is vital that old hatreds and prejudices are not passed on to new generations of children and young people.”—[Official Report, 4 July 2018; Vol. 644, c. 165WH.]

The Palestinian Authority is acting as a transmission belt for those very hatreds and prejudices.

The focus of my Bill is education, which is crucial in shaping young minds and it is the focus of the Department for International Development’s aid to the Palestinian Authority. The memorandum of understanding that governs this British aid is explicit: as a condition of funding, the PA must adhere to the principles of non-violence and respect for human rights. Ministers tell us repeatedly that their unpublished reviews suggest that the PA upholds those principles. The facts show otherwise.

For example, take the naming by the Palestinian Authority of schools, summer camps and sports tournaments after terrorist murderers and Nazi collaborators. At least 20 PA schools in the west bank and Gaza are named after terrorists, and three after Nazi collaborators. Those include Salah Khalaf, the head of Black September, a terror group whose name will forever be associated with the torture and murder of 11 Israeli athletes at Munich in 1972; Nash’at Abu Jabara, a member of Hamas, who built the suicide belts used by bombers in numerous terror attacks on Israeli civilians; and Amin Al-Husseini, the Grand Mufti of Jerusalem during the British mandate, a Nazi collaborator who moved to Berlin during the second world war, was responsible for an SS division and fought against the release of 5,000 Jewish children who perished in the gas chambers. These are not choices made by obscure local officials. They are deliberate decisions taken by the Palestinian Authority at the highest levels.

Ministers in this country do not appear concerned. Last year, the Department for International Development claimed ignorance on whether any of the thousands of teachers and public servants whose salaries it pays work in schools named after these purveyors of hate, whose names should be consigned to the history books. Outside the classroom, too, children are subjected to a barrage of vicious antisemitic propaganda. Children’s programmes on official PA TV feature children reciting poems calling Jews “barbaric monkeys”, “the sons of pigs” and the “most evil among creations”.

According to the Institute for Monitoring Peace and Cultural Tolerance in School Education, or IMPACT-se, the reformed school curriculum for primary and secondary schoolchildren introduced last September is “more radical than ever, purposefully and strategically encouraging Palestinian children to sacrifice themselves to martyrdom”.

Arabic language books describe terrorists such as Dalal Mughrabi—who led the infamous coastal road massacre in which 38 Israelis, including 13 children, were massacred—as “heroes”.

These lessons in hate are all-pervasive, infesting every aspect of the curriculum, and this curriculum drips with vile antisemitic tropes—that Jews sexually harass Muslim women and that they attempted to kill the Prophet Mohammed. There is no suggestion that peace with Israel is desirable or possible. References to peace agreements, summits and proposals previously present in school books have been expunged. In their place are lies about the al-Aqsa mosque being under threat and calls to “eliminate the usurper”—to conquer Haifa and Jaffa.

Young Palestinian minds are being poisoned. The opportunity for Britain to help promote the values of peace, reconciliation and coexistence is being squandered. This is not about a peaceful future. It is a scandal.

DFID Ministers were warned 18 months ago about the content of the new curriculum. They dismissed those concerns. Promised reviews have never materialised. Last September, the Minister of State, Department for International Development, Alistair Burt, claimed that the PA had “taken action to help address concerns raised”.

IMPACT-se research shows that there have been no major changes in the current school year. Indeed, the PA has deceived international donors for nearly 20 years with the suggestion that controversial schoolbooks are simply being “piloted”. Ministers have been repeatedly asked to suspend all aid to the PA that directly or indirectly finances those teaching and implementing this curriculum until fundamental changes are made. They have refused to do so. It is now time to require them to act.

My Bill calls for two actions: first, that teaching programmes in Palestinian Authority schools financed by the UK should promote common values such as peace, freedom, tolerance and non-discrimination; and secondly, that Ministers should conduct and publish an annual review to ensure that UK funds are spent in line with UNESCO-derived standards of peace and tolerance in education. British aid should support the goal, shared by Members across this House, of a two-state solution. It cannot and must not make that goal harder to achieve, but that is precisely what our support for these lessons in hatred is currently doing. It is time to stop this pernicious policy that works against a peaceful future for Palestinians and Israelis.

Source: They Work For You