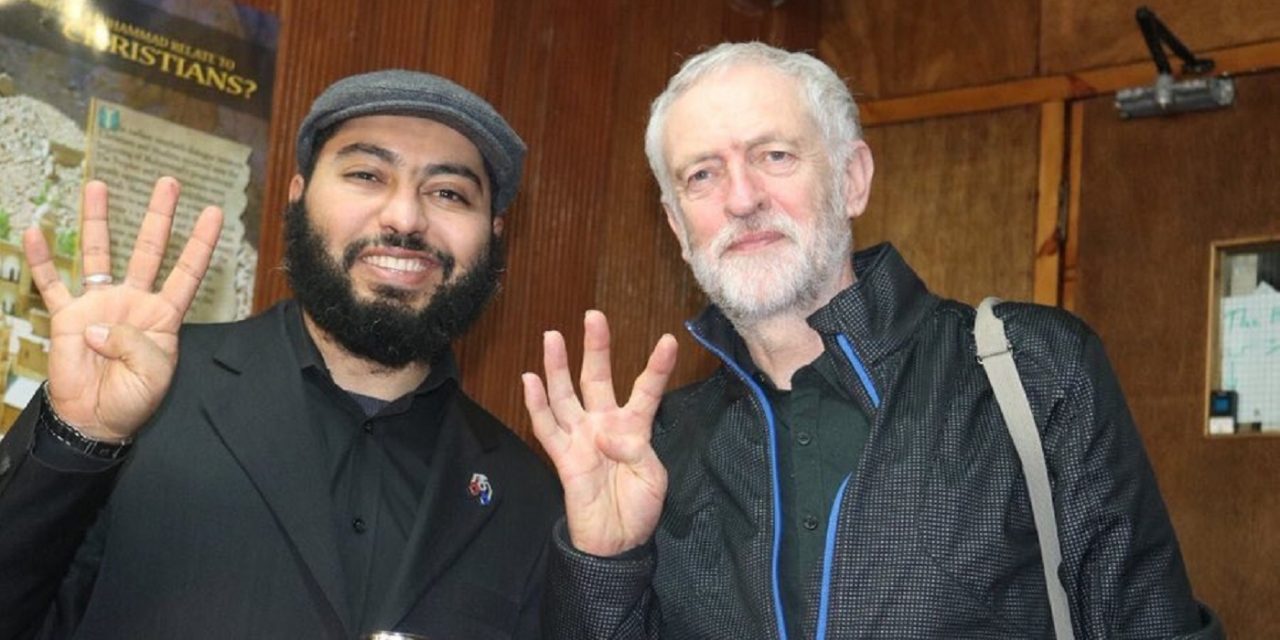 A picture of Jeremy Corbyn showing the hand gesture of the Muslim Brotherhood has been circulating on Twitter today, raising more concern over the Labour leaders ties.

Pictured with a member of the UK’s Muslim Association of Britain, the photo (whose source and date haven’t been verified) shows Corbyn raising four fingers, the well known hand gesture that first appeared in 2013 in support of the Islamist Muslim Brotherhood and its supporters in Egypt during the Arab Spring.

Non-terrorist, Islamist theocrats like the Egyptian Muslim Brotherhood, are to Muslims what the BNP are to the English: bigoted, identitarian & dangerous. How is it okay for a left-wing politician to be associated with the former, but not the latter? https://t.co/GX4bkNUKY7

Journalist and broadcaster Maajid Nawaz was one of those highlighting the concern, saying “Leader of Her Majesty’s Opposition @jeremycorbyn of @UKLabour making the Islamist Muslim Brotherhood “Rabaa” sign, symbolising support for Morsi’s fallen Muslim Brotherhood government in Egypt.

Images of the symbol became popular in protests, on social networking sites and at demonstrations throughout the Middle East during the Arab Spring uprising with the symbol allegedly originating as a four-fingered hand sign by pro-Morsi protesters during demonstrations in Egypt’s Rabia al-Adawiya Square.

The Middle East Forum explains that the hand gesture quickly evolved into an image of the hand commonly depicted in black on a bright yellow background. It is called the “R4BIA sign.” In English it is officially spelled in capital letters and the letter “A” is replaced with the number 4.

Many activists claim that the sign originated in Turkey, which officially opposed the military coup in Egypt. Turkish Prime Minister Erdogan was one of the first to promote the R4BIA hand sign during a speech when he saluted crowds several times with the four-finger sign.

The design of the symbol has apparently been endowed with characteristics of the sacred in Islam: the colour yellow used in the background signifies the golden Dome of the Rock in Jerusalem and the hand depicted in the colour black denotes the black cloth that covers the Kaaba.

Dawn Perlmutter, Director and founder of Symbol & Ritual Intelligence, says the R4BIA sign is not a benign peace symbol; it is a symbol of resistance, Islamism, martyrdom, and a visual call to arms comparable to the black flag of jihad.