Jeremy Corbyn has been revealed as a member of a second anti-Semitic Facebook group, which refers to “Jewish organ trafficking”, Jewish control of the media, and the “Rothschild Zionist Agenda”.

The Labour leader was added to the “History of Palestine” group on 10 August, 2014, according to political website, Guido Fawkes.

Posts published on the group include “the Rothschild empire” and the “Rothschild Zionist agenda and new world order”, while another refers to a “Jewish organ trafficking center, where kidnapped Syrians are stripped of their entire bodies”.

In another post, one user asks, “what are Jews doing here in Palestine other than occupiers? They have never ever been the natives of Palestine.”

A spokesperson for Jeremy Corbyn, said: “Jeremy condemns antisemitism in all its forms in the strongest possible terms. He was added to this group without his knowledge.”

A Jewish Labour Movement spokesperson said: “JLM has sought an urgent meeting with the Leaders Office. We will say what we have said repeatedly: Antisemitism disguised as anti-zionism has no place within the Labour Party or the wider Labour movement, and those involved in legitimate advocacy on behalf of Israelis and Palestinians need to be incredibly careful about who they associate themselves with.” 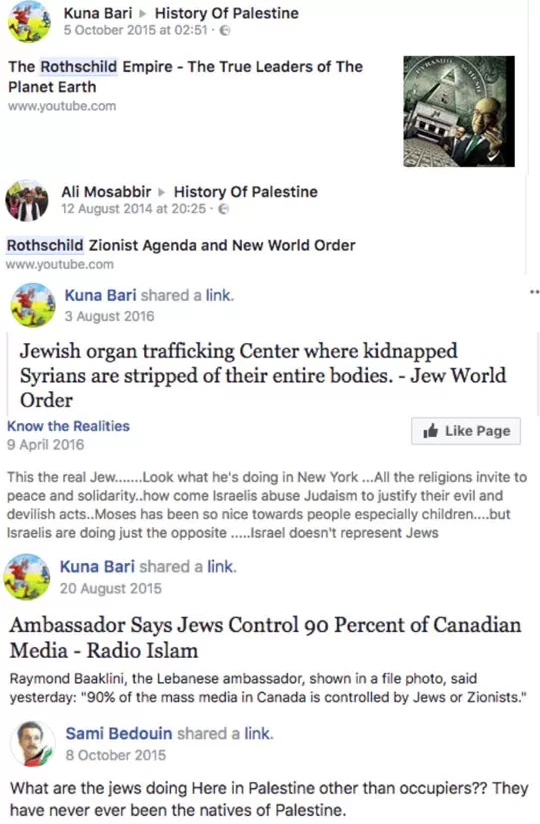 The revelation comes as Labour Party members were suspended earlier this month, after it was found they belonged to left-wing Facebook group, Palestine Live, which counts Holocaust deniers, white supremacists and anti-Semites among its members.

Corbyn admitted having formerly been a member of Palestine Live, but denied ever seeing anti-Semitic posts.

The Labour leader was named within a 280-page report, Anti-Semitism Inside Palestine Live, published by activist David Collier.