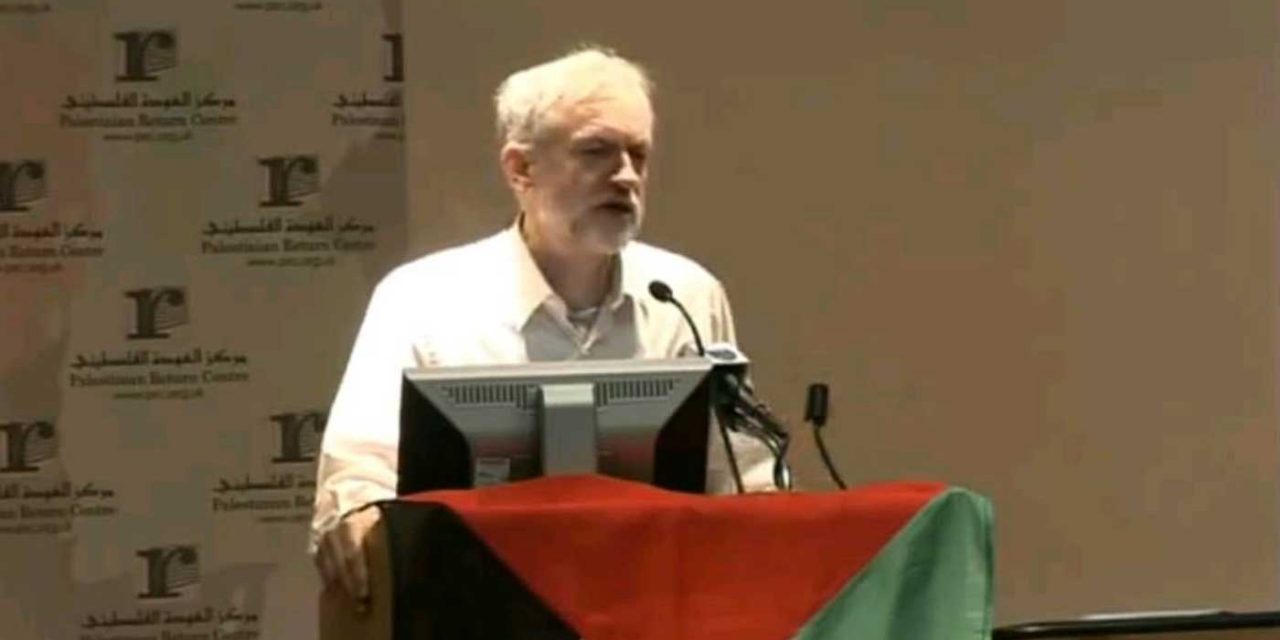 New footage has emerged of Labour leader Jeremy Corbyn applauding a speech that called for Israel’s destruction, seen sat alongside known anti-Semites who have been kicked out of Labour and is on stage condemning the British public for the way they voted.

The video footage was unearthed by Twitter user @TheGolem_ who published his findings last Thursday. The event was a pro-Palestinian meeting in 2011 which Corbyn both attended and spoke at.

The video footage shows Corbyn applauding the anti-Israel activist, Yisrael Dovid Weiss of the Neturei Karta Charedi sect, who is seen saying: “You said there should be the end of a Jewish state. I just wanted to respectfully say: The end of a Zionist state that has kidnapped the name of Judaism. It’s not a Jewish state.”

He added: “We want … a peaceful dismantlement of the state and to live together in harmony, God willing it will happen.”

Corbyn is seen from the back applauding as the camera pans around. There is another video clip from the front angle which confirms that it is indeed Jeremy Corbyn who was applauding.

In footage captured by the blogger Richard Millet, during the event Rabbi Weiss went on an extreme anti-Israel rant in which he calls for the “dismantlement” of the state of Israel. Corbyn (head just in view) lends his support for this statement by applauding his outburst: pic.twitter.com/EDNgu9qsSl

Far from the “kinder politics” that Corbyn claims to bring to the table, Corbyn is filmed condemning an entire town for the way they voted in a general election and accusing another of making a “huge mistake”.

“I condemn the people of Milton Keynes for the mistakes that they made in the May election”, Corbyn said, referring to the fact his friend, former Labour MP Phyillis Starkey, who was in attendance at the event, had lost her seat in Milton Keynes that year.

He also made mention of MP Martin Linton, who was also in attendance, accusing the Battersea electorate of making “such a huge mistake” for not re-electing him.

Clearly, a display that shows he is neither “kinder” about his politics nor respectful of the British public’s democratic decisions.

He then goes even further by saying “I condemn the people of Milton Keynes for the mistakes that they made in the May election”: pic.twitter.com/pV7PFDJkAs

To top off his ugly performance at the event, Corbyn went on to laud Al-Jazeera, the Qatari state-funded media outlet, saying “Thank God for Al-Jazeera”.

He was not speaking about Israel in this example, instead highlighting a story on Tunisia, but his admiration for media outlets such as Al-Jazeera and the Iranian run Press TV (which Corbyn hosted shows on and was paid by) is a recurring endorsement of anti-Israel and anti-Semitic media outlets.

Board of Deputies President Marie van der Zyl condemned the footage, saying: “Applauding a speaker calling for Israel to be dismantled is endorsing yet another extremist position.”

“This rag-tag band of racists, extremists, antisemites and Holocaust deniers with whom Mr Corbyn has consorted have contributed not one iota to peace in the Middle East.”

“They have served only to spread hatred against Jewish communities and to the entrenchment of hard-line views that have extended the conflict,” van der Zyl concluded.

This is another example of the Labour leaders links to anti-Semites and his agreement with extremist views on Israel. When you add it all together, the views of Corbyn are very troubling indeed.