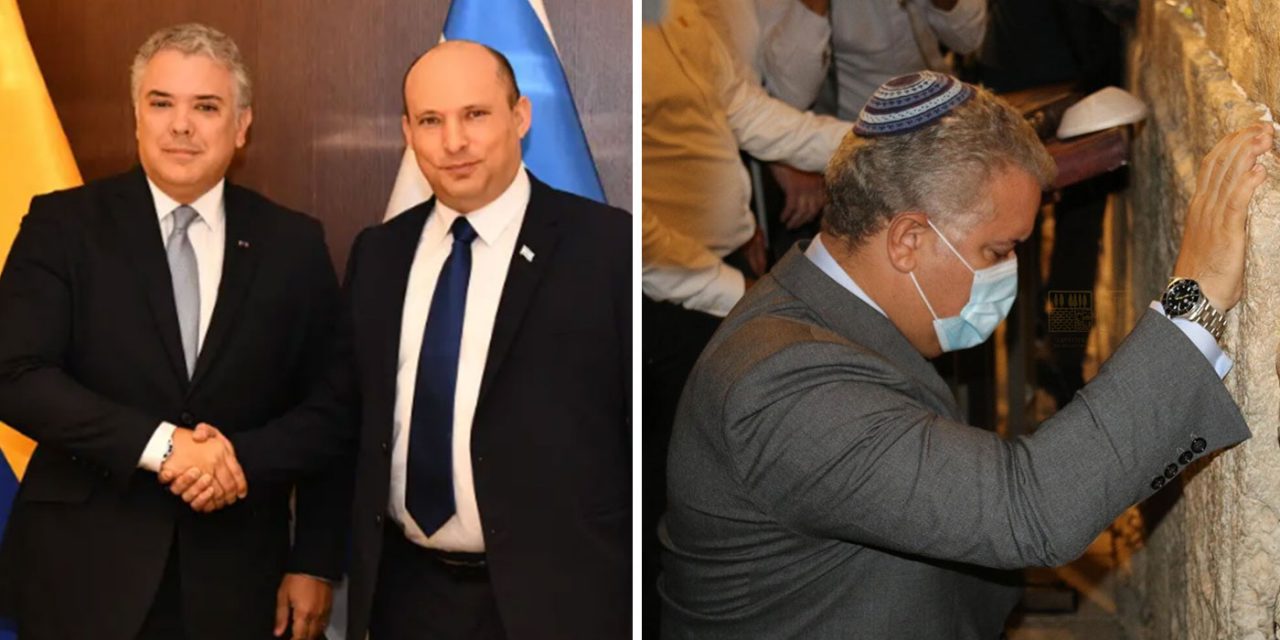 Colombia’s President Ivan Duque visited Israel this week where he met with Israeli leaders and prayed at the Western Wall, as well as opened an office for trade and innovation in Jerusalem.

At a press conference during his visit, President Duque said he hopes the Israel-Colombia free trade agreement will attract greater commerce and investment between the two countries.

“We want to triple exports in the next few years. We want to boost connectivity, artificial intelligence, internet of things, agricultural technology and attract more Israeli technology in our country,” he stated.

The Colombian president said that his country is “en route to become the Silicon Valley of Latin America,” investing heavily in innovation.

He added that Colombia “is a leader in the energy transition in Latin America, in a country that is the second most bio-diverse on the planet, with 30% of the territory about to be declared protected by 2022.”

During his visit, Duque met with Israel’s Prime Minister Naftali Bennett who thanked Duque for “leading a strategic change in our relations, and for [his] honest support for Israel and [his] friendship.”

The Israeli leader also called Duque’s visit to the Western Wall the day before “a very significant gesture for the Jewish People and the State of Israel.”

“I can tell you with certainty that it will bring you good luck,” Bennett added. “There’s a direct line to God there.”

Duque, elected in 2018, was the protegé of former Colombian president Juan Manuel Santos, and adopted his turn towards more pro-Israel policies, which he continued as an ally of former US president Donald Trump. Colombia’s decision to open an office in Jerusalem as well as its Hezbollah ban, along with other Latin American countries, were policies which the Trump administration had advocated.

Israel’s President Herzog also met with Duque and used the opportunity to urge Colombia to use its new position on the UN’s International Atomic Energy Agency Board of Governors, for which Colombia was recently admitted, to “advance a meaningful diplomatic battle against the Iranian nuclear program.”

“Like Israel, I know that Colombia is concerned about Iran and Hezbollah’s terror cells being established on your border with Venezuela. From many years of experience, it is clear that these forces must be stopped swiftly—if not a minute sooner,” Herzog added.

The diplomatic highlight of the visit came when the Colombian President opened the country’s office for trade and innovation on Jerusalem’s capital, becoming the third South American country to do so following Brazil and Honduras.

Speaking at the grand opening, President Duque said the country’s presence in Jerusalem is “a very important step” and enables “opportunities to entrepreneurs” both in Israel to connect with Colombia and within Colombia to connect with Israel. He says the centre will “make Colombia a more attractive country” as they tap into this potential.

He explained that Israel and Colombia have a brotherly relationship and the two countries “uphold the same principles.” He added that “innovation unites us and we will work closely to create a structure that makes Israel our main partner in the region.”

Israel’s Science and Technology Minister Orit Farkash-Hacohen took part in the opening of the office, saying, “Colombia is a true friend of Israel.”

“Governments make alliances, but it is the people who build bridges. Today, we add another significant layer to the deepening ties between Israel and Colombia,” she said.

Farkash-Hacohen continued, “I am certain that Colombia’s official entry into the flourishing Israeli innovation ecosystem will benefit both countries and their tech sectors.”

Israel’s Prime Minister Bennett said that the new office is “a sign that relations between us are stronger than ever.”

“Technology and innovation can do extraordinary things, not just for our countries, but for the whole world. We are honoured that you chose Israel to be the first country in which Colombia is opening an innovation office,” he stated.