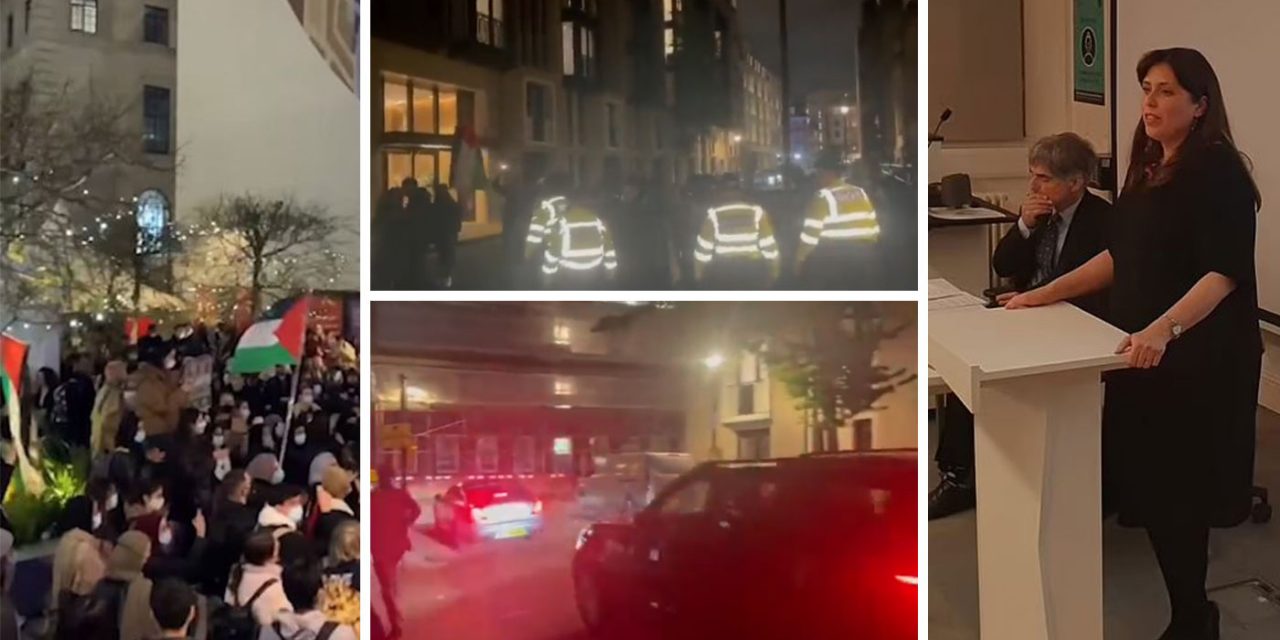 London was host to disgraceful scenes Tuesday night as Israel’s ambassador to the UK was bundled into a car by security to escape an angry mob of pro-Palestinian activists. However, the Ambassador has vowed she “will not be intimidated” by the anti-Israel haters.

Tzipi Hotovely, Israel’s ambassador to the UK, was speaking at the London School of Economics on Tuesday evening at an event hosted by LSESU’s Debate Society. The meeting was part of a series of talks on the Middle East and included speakers from both sides of the debate, including Israel’s ambassador and the Palestinian envoy to the UK who will be speaking tomorrow.

As expected, the Israeli official’s talk was heavily protested against by an anti-Israel mob. Instead of peacefully protesting the event, however, the mob tried to disrupt the talk and intimidate the ambassador, including attempts to grab her as she left the venue.

News of the incident broke last night when a video was shared showing the dramatic scenes. Shamefully, the person sharing the video, Hadi Nasrallah, praised the violent behaviour of the anti-Israel mob, saying it was “amazing” that the ambassador was “forced to flee”.

Israeli ambassador Tzipi Hotovely was forced to flee London’s LSE university after students protested her presence and refused to give her a platform. This is how colonial war criminals must be treated everywhere. #FreePalestine pic.twitter.com/SuInl4tna0

These scenes are made even starker when we note that this event took place on the 83rd anniversary of Kristallnacht, the Night of Broken Glass.

Kristallnacht was a pogrom against Jews carried out by the Nazi Party on the night of 9th November 1938. Jewish homes, schools, businesses and synagogues were ransacked and their windows smashed. Rioters destroyed 267 synagogues, over 7,000 Jewish businesses were damaged, and around 30,000 Jewish men were rounded up and placed into concentration camps. Around 90 Jews were murdered that evening in the violence.

It is clear that the anti-Semitism on display 83 years ago is still alive and well today in the anti-Israel activists who hate the Jewish state.

Additionally, those opposing the ambassador even attempted to smash the windows of the ambassador’s car. Instagram account LSE Class War appeared to take credit for organising the chaos.

It wrote before the incident: ‘Whoever smashes the Ambassador car window gets pints.’ The account later added: ’18:25: we’re storming in. Let’s make her shake. F*** the old bill.’

According to the Daily Mail, LSE Class War has previously been mocked for trying to ban private school students, eradicate free-market economist Friedrich Hayek from the curriculum, no platform speakers and introduce minority quotas for staff at the university.

Before the event, the LSESU Palestine Society also riled up tensions. Instead of calling for a peaceful protest they instead condemned the “securitisation of the event” from the Metropolitan Police and demanded action by LSESU to safeguard students from “islamophobia”, adding, “the police have absolutely no place on our campus.”

We are sure you will find it hard to understand this kind of mentality. Not only were the police imperative in keeping the ambassador safe, but they were also important to keep Jewish and pro-Israel students safe. There was no threat at all against Muslim students or the pro-Palestinian activists. All of the danger came from the radical anti-Israel haters and the only reason police were needed was to keep people safe from their attempted attacks.

It is disgraceful that those who hate Israel feel this is a good way to express themselves, but sadly this is nothing new. The tactics of aggression, intimidation and violence have long been used by anti-Israel activists when confronting Israelis and Jews – whether it is from Hamas terrorists in Gaza or far-left protesters in London.

You will not see the Palestinian ambassador to the UK being chased and hounded by pro-Israel activists when he speaks at the same university tomorrow. In fact, if that does happen you’ll see condemnation from groups like ourselves. That never happened from pro-Palestinian activists who are praising this violence.

To be clear, no ambassador or representative of a country should be treated this way in Britain!

Home Secretary Priti Patel tweeted that she was “disgusted” by the treatment of the Israeli Ambassador, adding that, “antisemitism has no place in our universities or our country.”

Patel said she would “continue to do everything possible to keep the Jewish community safe from intimidation, harassment and abuse.” Adding that the police have her “full backing in investigating this appalling incident.’

The UK’s new Education Secretary Mr Zahawi posted on Twitter said the scenes were “deeply disturbing” and expressed his apologised to Ambassador Hotovely.

Foreign Secretary Liz Truss said, “the treatment of Israeli Ambassador Tzipi Hotovely last night and the attempt to silence her was unacceptable.”

Middle East minister James Cleverly said that we as a society “value open debate and peaceful protest”, but that “aggressive and threatening behaviour directed at Israeli Ambassador Tzipi Hotovely last night was unacceptable.”

Sajid Javid said he was “appalled by the violence and threats” levelled against the ambassador and called it “antisemitism, plain and simple”.

Labour Friends of Israel also condemned the “shocking scenes”. The group said it was right that “universities should host honest disagreement and debate” but that “under no circumstances is aggressive and intimidating behaviour acceptable.”

They added: “Yet again, the extremist BDS movement continues to delegitimise and demonise the world’s only Jewish state.”

I’m thankful for all the support I have received from the British government, many friends and partners.

I had an excellent event at #LSE and I will not be intimidated. I will continue to share the Israeli story and hold open dialogue with all parts of British society. pic.twitter.com/12xFp87Kc2

Thankfully, the ambassador and the Israeli embassy are not swayed by the abuse against them.

A spokesman for the Israeli Embassy said: “Ambassador Hotovely was invited to speak with students at The LSE titled the ‘New Era in the Middle East.'”

“It was a successful, open and fruitful discussion that went ahead as planned. Outside the venue, there was a demonstration organised by Palestinian and Islamic societies across London universities.”

“British police maintained order at the scene. The violence we witnessed when the ambassador left the premises after the talk will not deter Israeli diplomats from engaging in meaningful dialogue with all parts of the British society.”

Ambassador Hotovely tweeted, “I’m thankful for all the support I have received from the British government, many friends and partners.”

“I had an excellent event at #LSE and I will not be intimidated. I will continue to share the Israeli story and hold open dialogue with all parts of British society,” she added.

Just as Israel is not intimidated by the threats of those surrounding her, neither is Israel’s Ambassador.

We Christians who support Israel will continue to pray for Israel’s ambassador to the UK and for all the Jewish community who live here under threat and intimidation by anti-Semitic haters of Israel. For Zion’s sake, we will not keep silent!