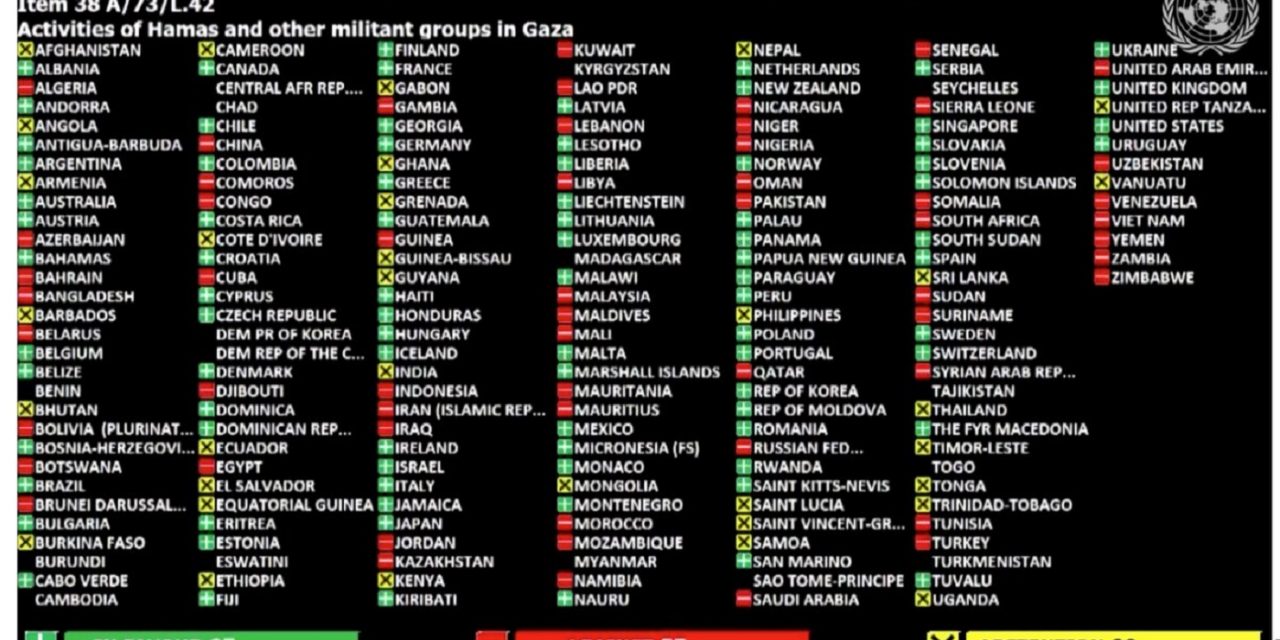 87 countries, including the UK voted in favour of the US-drafted resolution; 57 voted against and there were 33 abstentions. However the results did not reach the two-thirds threshold that was decided by an initial vote moment prior to the main vote. Had the Assembly agreed for the US-preferred majority vote, instead of the Arab-led two-thirds alternative, the vote would have been in favour of condemning Hamas for the first time in the UN’s history.

Instead the UN has tonight sided with the terrorist group Hamas, which shockingly received applause by some in the UN assembly.

The US draft resolution “demands that Hamas and other militant actors including Palestinian Islamic Jihad cease activity, including by using airborne incendiary devices.”

UN resolution condemning Hamas does not pass as it didn’t get the 2/3 of votes needed.
Red = voted to condemn terror
Green = voted in favor of jihad
Yellow = unsure whether to condemn terrorists. @NikkiHaley and the US set the U.N. a humanity test. It failed. pic.twitter.com/3hALR6Cjsv

Immediately following the vote, Israel’s Ambassador to the UN, Danny Danon said, “Those who endorsed terrorism today, will be forced to endure its consequences tomorrow.”

Nikki Haley, who will step down as UN ambassador at the end of the year, has repeatedly accused the United Nations of an anti-Israel bias and has strongly supported Israel in its latest confrontation with Hamas in Gaza.

Before the vote, she told the UN General Assembly, “The question before us now is whether the UN thinks terrorism is acceptable if, and only if, it is directed against Israel.”

When she arrived at the UN in January 2017, Haley vowed that the United States will be “taking names” of countries that oppose US President Donald Trump’s foreign policy.

Absolutely shameful!! @UN failed to condemn #Hamas even after years of attacks via suicide bombings, kidnappings, missiles, & more against Israelis. The applause after the vote says it all. #Hamas hurts #Israelis, #Palestinians & #peace. When will the #UN speak the truth???

Ahead of the vote on Thursday, the US ambassador sent a letter to all UN missions to make clear that “the United States takes the outcome of this vote very seriously.”

“The resolution has been carefully-crafted to address a specific problem, and it reflects consultations with many stakeholders to ensure balance.

“That is why we are asking that you not only vote in favour of the resolution but that you also vote against any amendments or other efforts to undermine adoption of the text,” she added.