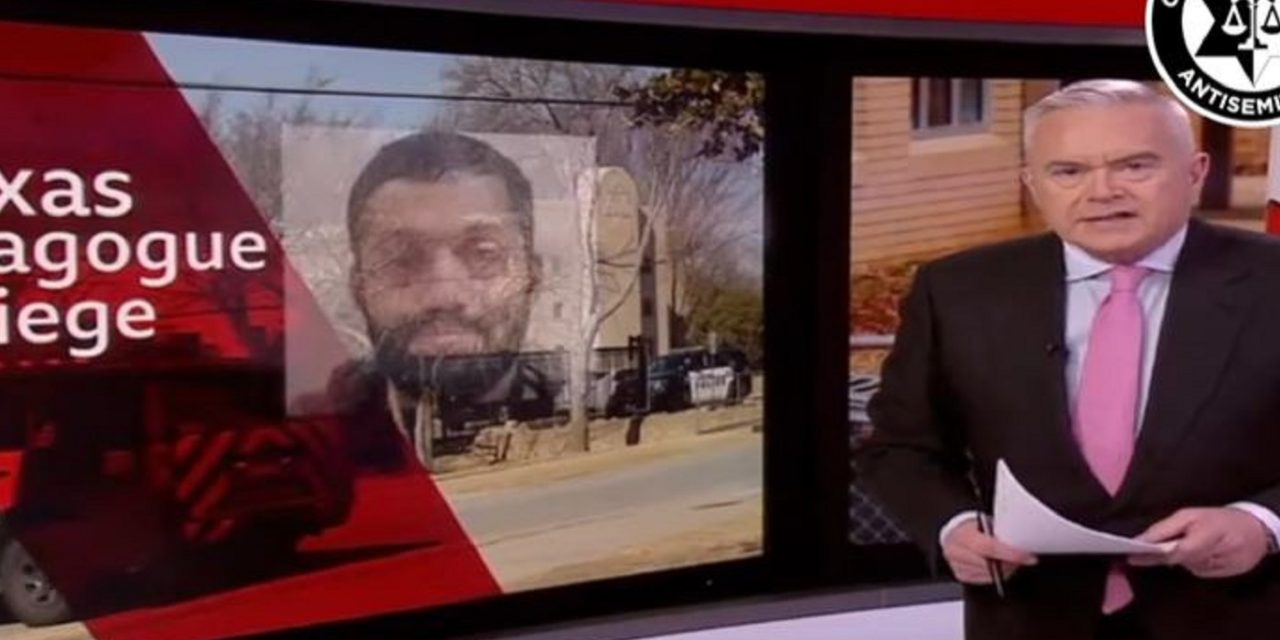 The BBC’s 10pm News report on the Texas synagogue hostage crisis has been heavily criticised for failing to mention anti-Semitism and asking more questions over the terrorist’s death than why he targeted Jews.

Stephen Polland, editor of the Jewish Chronicle, writes, “I don’t think I have ever seen a more grotesquely skewed report of a major terrorist incident than last night’s BBC report, which could only have happened if all involved went through a series of intellectual contortions to avoid mentioning antisemitism.”

He’s referring to the report by the BBC’s Ed Thomas, which began by asking, “What made Malik Faisal Akram leave Blackburn, the place he called home, to travel to Texas , arm himself with a gun and hold people hostage inside a synagogue?”

Mr Thomas went on to say: “The US president has described what happened here as an act of terror” – which is indeed correct, President Biden did say that. But he also – as did our own PM – labelled it as an antisemitic attack. You know, what with the rabbi, the Jews and the synagogue. But no, for the BBC, this is clearly not about antisemitism. It was just a coincidence that the rabbi and the Jews were in the building he walked into, which just happened to be a synagogue.

The opinion piece by Polland asked why attention was given to the terrorist’s fate, rather than why Jews were targeted.

The real outrage, it seems, was that he was killed, with the report including a friend of Akram’s family attacking the US police: “It’s the way he was killed, he was shot – that shouldn’t have happened.” Ed Thomas continued that this raised a series of questions, which he itemised. None were about why Akram hated Jews so much he flew to Texas to get them.

The BBC News at 10 report on Texas siege – in which a rabbi and three other Jews were taken hostage in their synagogue – managed not to mention antisemitism once. Quite an achievement.

Another journalist, Etan Smallman, made similar observations: “The BBC News at 10 report on Texas siege – in which a rabbi and three other Jews were taken hostage in their synagogue – managed not to mention antisemitism once. Quite an achievement.”

He continues, “I often come to defence of BBC, especially when it comes to breaking news, but they have had more than 48hrs to get this right. It is the quintessence of #jewsdontcount, but it is still shocking to see.”

Skynews 12am breakdown:
Sky's Mark Stone did not mention antisemitism once.
Akrams' family claims he suffered from mental health.
Sky's other presenter just said, "it's good to remember his death is also the death of a son, brother…."
Yup, u can see where that one is going😠

The latest controversy by the BBC  comes amid a row over the broadcaster’s controversial report on the anti-Semitic attack on Jewish children on a bus on Oxford Street.

Click here to read the opinion piece in full