Controversial peer Baroness Tonge has left the Liberal Democrats following the party’s decision to suspend her.

News of her departure comes following “outrageous” comments at an event hosted in Parliament by Tonge. One speaker compared Israel to terror group Islamic State while the Jews were blamed for the Holocaust.

Cabinet minister David Lidington told MPs he was “genuinely horrified” by reports of the remarks.

Tonge, who sits as an independent in the Lords, chaired the meeting.

The Palestinian Return Centre, which live streamed the event on its Facebook page, said the event inside Parliament was part of its Balfour apology campaign – which calls for the UK Government to “officially apologise for its past colonial crimes in Palestine”. 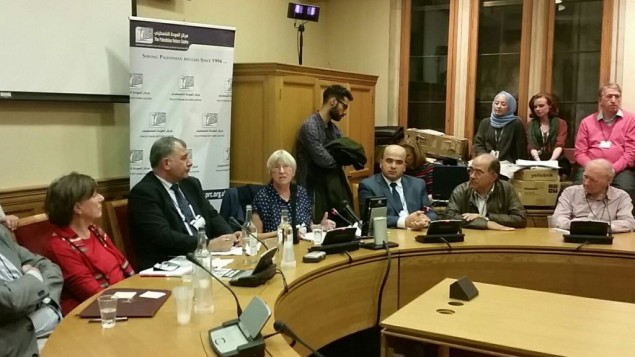 The panel event in parliament, held by the Palestine Return Centre. Baroness Tonge is sitting second from the left in red.

Simon Johnson, Chief Executive of the Jewish Leadership Council reacted: “It is high time that Baroness Tonge has been suspended from the Liberal Democrats and I welcome this step by the party. It is long overdue. Baroness Tonge’s anti-Israel hatred is there for all to see and I trust that the Liberal Democrats will now conduct a proper disciplinary process and continue to take steps to counter anti-Israel hatred within their party.”

Jonathan Arkush, President of the Board of Deputies of British Jews, said the suspension “has to be the right decision.

“She is a repeat offender, propagating the worst antisemitic tropes over and over again. Yesterday, we raised her antics as a key topic in our meeting with Liberal Democrat Leader Tim Farron and it is heartening that our comments were taken on board”.

Gavin Stollar from Liberal Democrats Friends of Israel said: “Finally Baroness Tonge has reaped what she has sown. She is an anti-Israel zealot who can now espouse her offensive views outside our party.”

The Israeli Embassy in the UK reacted by saying “anti-Semitism should never be tolerated.”

Speaking in the Commons, Mr Davies asked Mr Lidington: “May we have a debate on the use to which these premises may be put following reports that outrageously a member of the House of Lords presided over an event at which Israel was compared to Islamic State, and the Jews were even blamed for their own genocide?

“Could we discuss this and also whether we should be issuing an apology for these outrageous comments to the Israeli government and the Jewish people.”

Commons Leader Mr Lidington replied: “I read the newspaper reports of the event in question and I confess I was genuinely horrified by the speech that was reported there.

“I don’t want to treat every newspaper article as gospel but I think we should all be very concerned about what happened there.

“And I hope that since this appears to be an event organised by a leading member of the Liberal Democrat party, that the leader of the party does launch an immediate and thorough investigation so we can get to the truth and any appropriate disciplinary action can be taken.”