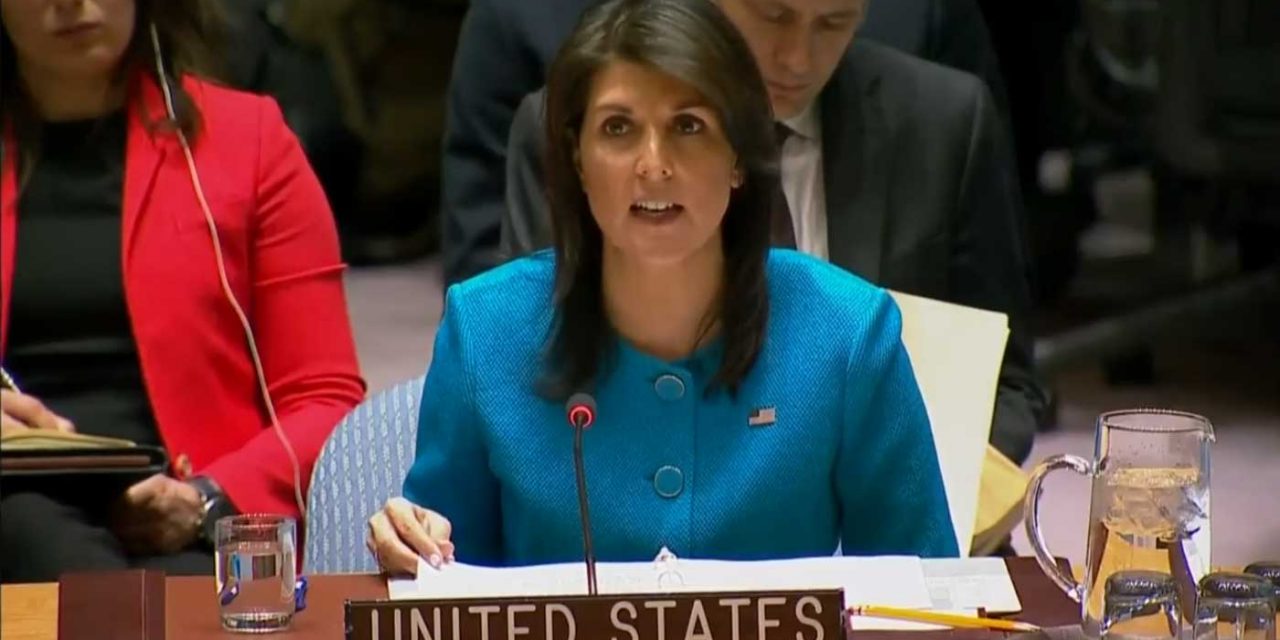 Nikki Haley, the US Ambassador to the United Nations, gave strong words in support of Israel and against Iran and Hezbollah’s actions in Syria during her remarks at the UN Security Council on Wednesday.

Here are her full remarks:

Thank you, Mr. President. Thank you, Staffan, for your briefing and for all of your efforts to find a peaceful solution to the conflict in Syria. The United States fully supports your initiative to bring the parties back to Geneva, and to start work on a new constitutional committee in accordance with Resolution 2254.

But we are not going to get to peace when the situation on the ground continues to escalate, with dire risks for the security of the entire region. Earlier this week, Iranian-backed militias in southern Syria launched a drone into Israeli territory. It was an egregious and unprompted escalation.

Iran was once again doing what it does – risking conflict and testing the will of its neighbors and opponents to resist its aggression. Israel rightly took action to defend itself. The United States will always stand by our ally when confronted with provocations from Iran, Hezbollah, or the Assad regime.

But this incident shines a spotlight on the reality in Syria today. We are seeing actors engage in a dangerous game of pushing boundaries, instead of behaving responsibly and committing to peace.

Last week, pro-regime forces launched an unprovoked attack against the Syrian Democratic Forces and advisers from the Defeat ISIS Coalition. This was a large attack involving numerous tanks, artillery, and fighters. The Coalition acted in self-defense to repel the attack, and the United States will always reserve the right to act in self-defense.

But this attack shows the recklessness of the pro-regime fighters. Parties on the ground need to adhere to all established de-confliction mechanisms, and ensure nothing like this happens ever again. The Assad regime has become a front for Iran, Hezbollah, and their allies to advance the irresponsible and dangerous agenda for the Middle East.

On every front of this conflict, we find fighters imported by Iran from Lebanon, Iraq, and Afghanistan. When we see the Assad regime starving civilians in eastern Ghouta or pummeling schools and hospitals in Idlib, we see advisers from Iran and Hezbollah helping direct those atrocities. This support for the Assad regime is not new, of course. But the drone flight this week is a wake-up call for all of us. Iran and Hezbollah are making plans to stay in Syria.

When we look out across the Middle East, we know one thing for certain. When Iran and Hezbollah move in, instability always follows. So when we talk about peace in Syria, we need to face the reality of what’s happening on the ground. Peace is urgent in Syria. All of us on the Council know that.

But we can’t offer support for peace on the one hand, and ignore the fact that the chief sponsor of terrorism in the Middle East and its terrorist militia are digging in. Even as we talk about peace at the UN, the fighting is getting worse. Much of the violence is happening in so-called de-escalation zones. Russia was supposed to guarantee adherence to these de-escalation zones to help the political process. But then again, Russia was also supposed to guarantee that all chemical weapons would be removed from Syria.

Instead, we see the Assad regime continue to bomb, starve, and yes, gas civilians. All of us on this Council know what it will take to get to peace in Syria. More than two years ago, the Council unanimously adopted Resolution 2254, which includes a framework for ending this war.

The United States is committed to seeing the full implementation of Resolution 2254, which President Trump and President Putin also reaffirmed when they met last November in Vietnam. We also know how peace talks need to happen. There is no doubt that Geneva and the UN-led political process is the sole legitimate venue for coming up with a political solution in Syria.

But it’s hard to see how a peace process will work while the Assad regime continues to launch all-out attacks against the Syrian people, and Iran and Hezbollah are entrenching themselves inside the country. Ultimately, we must recognize that the Assad regime does not want peace unless it’s peace on their terms – a peace in which every person in Syria who opposes the regime is murdered, tortured, starved, imprisoned, or forced to flee the country.

So if the Geneva process is going to work, we need to see a change. As one of Assad’s key backers, Russia can change this behavior. Russia can push the regime to commit to seeking a real peace in Syria, a peace that helps the Syrian people. A peace that helps ensure the region’s security. Now is the time for Russia to use that leverage.

The road to peace will come when all of the parties stop provoking each other, and choose the responsible path. The path is clear: follow Resolution 2254, support Geneva, and most of all, push the Assad regime to do what it plainly does not want to do. If we rally around these goals, we will achieve real peace in Syria. Thank you.