After Erekat’s death, why did British politicians praise this terrorist supporter as a ‘Champion of Peace”? 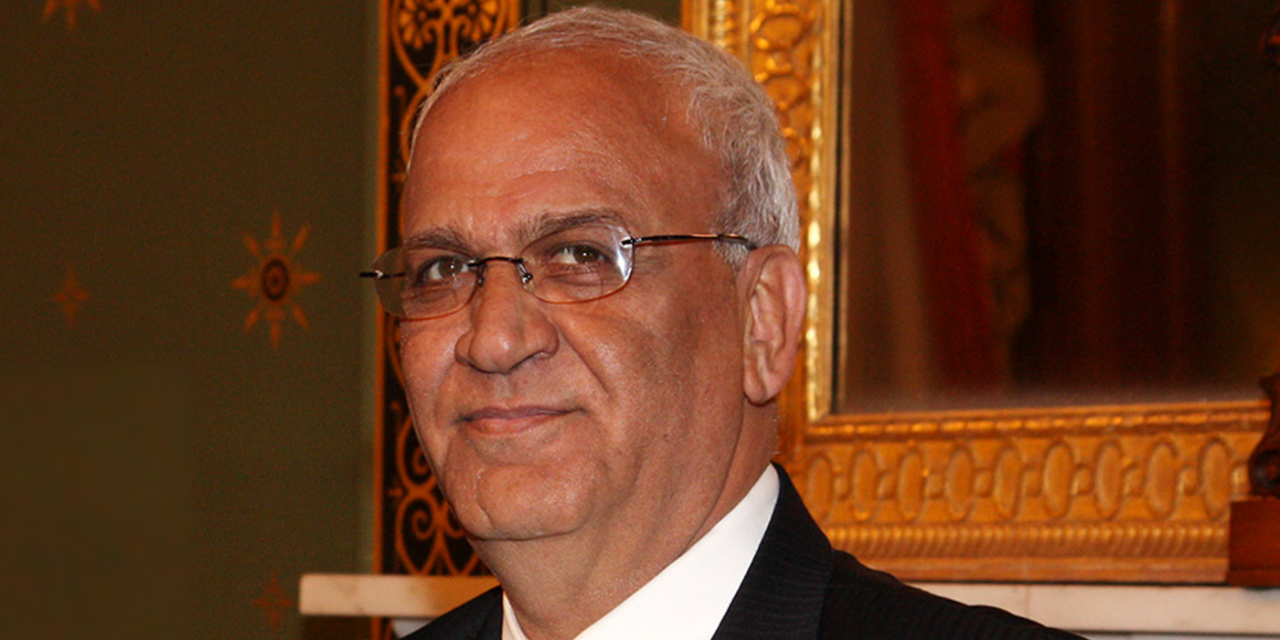 In the wake of Saeb Erekat’s death, British politicians from both sides of the aisle took to Twitter to praise the late Palestinian negotiator. However, some went as far as declaring him a “champion of peace” when in reality he supported terrorism against Israel, advocated for and worked with Hamas and distorted history and even the Bible in order to attack Israel.

Saeb Erekat died on 10th November after suffering complications from Coronavirus (Covid-19). Before he passed away, he was transferred to Israel for treatment, where Israeli doctors and nurses fought to save his life. Israel did not repay evil with evil, but instead with good. Sadly, their best efforts were not enough to save Erekat’s life.

During his lifetime, Saeb Erekat became a chief negotiator for the Palestinian Authority, he was a spokesperson for the PA and was given the honour of speaking at the United Nations as a figurehead for the Palestinians and was even invited to speak to British politicians in parliament. To many, he was seen as “partner for peace” and someone who was open to dialogue with Israel.

Prime Minister Boris Johnson said he was “saddened to hear of the death of Dr Saeb Erekat, and moved by the ceremonies today in Ramallah and Jericho.”

I was saddened to hear of the death of Dr Saeb Erekat, and moved by the ceremonies today in Ramallah and Jericho. He dedicated his life to dialogue and advanced the cause of peace and Palestinian rights against the odds. My thoughts are with his family and the Palestinian people.

Johnson added that Erekat “dedicated his life to dialogue and advanced the cause of peace and Palestinian rights against the odds. My thoughts are with his family and the Palestinian people.”

Dr Saeb Erekat was a champion of dialogue and Palestinian rights. I am saddened to hear the news of his tragic passing. My thoughts are with his family and the Palestinian people at this difficult time.

“Dr Saeb Erekat was a champion of dialogue and Palestinian rights”, Raab said. “I am saddened to hear the news of his tragic passing. My thoughts are with his family and the Palestinian people at this difficult time.”

On the Labour front, Shadow Foreign Secretary Lisa Nandy praised Erekat as a “champion of peace”.

Sad to hear Saeb Erekat has died. A champion of peace, a two state solution and the rights of the Palestinian people – it’s a testament to his life to see so many tributes paid across the divide https://t.co/qFiVTyLcp8

“Sad to hear Saeb Erekat has died. A champion of peace, a two state solution and the rights of the Palestinian people – it’s a testament to his life to see so many tributes paid across the divide,” wrote Nandy.

With all this praise for Erekat from some of the UK’s leading politicians, including the Prime Minister himself, you would be forgiven if you thought Saeb Erekat was a great man. In fact, most of the media reports surrounding his death praised him as such. However, Saeb Erekat was for from a “champion of peace”.

The Truth about Saeb Erekat

The truth is this: Saeb Erekat was a terrorist sympathiser and advocate for armed struggle against Israel. He knowingly worked with and supported proscribed terror groups (a crime in the UK). He distorted the truth and historical facts in order to attack Israel and undermine the Jewish people’s claims to the land. He even distorted the Bible for these aims. And he used every political weapon at his disposal to attack Israel.

Erekat referred to convicted Palestinian terrorists, who murdered Jewish children, as “fighters for freedom” and said it was “forbidden” to call Palestinian actions (such as suicide bombings, shootings and stabbings) “terror”.

“The Palestinian people’s struggle is meant to achieve freedom, independence, and the end of the occupation, settlement, collective punishments, and war crimes, and it is forbidden for anyone and any party that relies on international law and the international bodies to describe this struggle as terror.” – Saeb Erekat

If you look at the date, Erekat said that statement this year. He happened to say it in a Palestinian newspaper rather than at the United Nations, which is why our politicians may be unaware of it, but it doesn’t change the fact he said it.

This is common with Palestinian diplomats like Erekat, they will say one thing at international forums and something completely different to their own people, which is usually when they are telling the truth.

Not only did Erekat not see terrorism as terrorism, but he also praised those who committed such atrocities and advocated for terrorists to be rewarded financially for their actions.

“Our brave prisoners, who gave and sacrificed their freedom for Palestine and its freedom, are worthy of aid, support, and constant activity by us in order to release them and put an end to their suffering. The prisoners’ cause is a national and central cause, and we bow our heads in admiration and honor of the prisoners’ sacrifices, for their acts of heroism, and for their ongoing battle with the occupation.” – Saeb Erekat

This view aligns with the PA’s position of paying terrorists and their families for carrying out attacks. The PA spends hundreds-of-millions of pounds every year paying convicted terrorists.

Furthermore, Erekat advocated for the release of terrorists from prison.

“We are working to end the occupation, to realize the sovereignty of the State of Palestine whose capital is Jerusalem, and to release all of the prisoners unconditionally, as they are fighters for freedom.” – Saeb Erekat

To further show how much Saeb Erekat supported terrorism, let’s look at Hamas and his support for them.

Hamas is a terrorist organisation by all accounts. They routinely carry out terror attacks against Israel, such as launching rockets into Israeli civilian populations. Hamas has a stated aim of destroying Israel and removing Jews from their historic homeland.

“I am telling everyone, on behalf of President Mahmoud Abbas and the [PLO] Executive Committee, that Hamas is a Palestinian movement, which never was and never will be a terrorist movement.” – Saeb Erekat

This backs up his claim that he does not see Palestinian terrorism as terrorism. Imagine seeing the aftermath of suicide bombings, where terrorists deliberately targeted and killed Israeli school children, and not calling it terrorism. What person would see such evil and refuse to call it such? Surely, not one who deserves praise.

It does not matter what Saeb Erekat thinks. The reality is that Hamas is a terrorist organisation, and the British government agrees. Hamas is outlawed in the UK. In fact, to support these groups in any way is a criminal offence in Britain.

Now, you may be looking at the 2014 quote and thinking his views changed. That’s not true, in December 2019 interview on live TV, Erekat once again explained his support for Hamas.

“After Palestine became a member of the International Criminal Court [ICC], President Abbas appointed a higher national supervising committee. I have the honor of being the committee’s chairman, and [FM] Riyadh Al-Maliki is the official link between the committee and the ICC, and he also serves as the committee’s rapporteur.”

“This committee includes the complete spectrum of the Palestinian political factions”.

“There were 45 members in the committee and we all worked as a team. Dr. Ghazi Hammad, for example, was elected as the committee’s spokesman… He is one of Hamas’ leaders. There were six Hamas members in the committee. Khalida Jarrar – may she be released soon – represented the PFLP. Qais Abu Layla [from the DFLP] was also a member. I don’t want to go into all the names, but I will just say that no [faction] was left out.”

This is Saeb Erekat admitting that he worked directly with Hamas and PIJ and advocating for them. He wasn’t simply sharing the stage with them, he was the chair of the committee that Hamas and PIJ were a part of and this committee worked in international organisations to attack Israel.

He also advocated for Hamas, saying that Hamas “are an inseparable part of the Palestinian people and its struggle against the occupation.”

These statements, some of which were made on live television and therefore are irrefutable, are criminal offences in Britain.

So again, why are senior politicians in Britain praising someone as a “champion of peace” when that same person worked with Hamas and PIJ as well as declared they are not terrorist groups?

Besides his support for terrorism and terrorist groups, Erekat also used every political tool at his disposal to attack Israel. Whether it was UN resolutions which denied Jewish claims to their holy sites or abusing the ICC as mentioned above, Erekat was always on the offensive to delegitimise Israel.

Speaking in 2019, before any of the recent normalisation agreements, Erekat said, “to normalise relations [with Israel] is to stab the Palestinians in the back and to sanction the spilling of Palestinian blood”.

This was a typical over-exaggeration from Erekat and one that hasn’t come to fruition. Simply because Israel is not the aggressor the Palestinians claim them to be.

Instead, the Palestinians broke security relations with Israel and rejected aid from Arab nations who sent it through Israel. And they did this during a Pandemic.

Think about this. Erekat’s PA rejected aid for Palestinians, including ventilators, and stopped them being accepted into the Palestinian territories because of his hatred of Israel. Because the Palestinians stopped security cooperation with Israel, Palestinians were denied hospital access within Israel, while Erekat himself went to Israel for treatment. All of this was because Arab nations made peace with Israel.

Despite all of this, British politicians praised him as a “champion of peace” without a whimper of opposition.