Echoes of the Past – a personal account of visiting Auschwitz

The eerie silence was so heavy it was almost tangible and stirred every emotion within me.  The bare windows around the room beamed in shafts of light to the floor below. Apart from my husband and I, there was nothing, absolutely nothing except an odd light fixture from a past era hanging from the ceiling. I stood and looked around.  The evidence was all gone but the walls had seen it all and the memory was indelibly etched into their blankness.

Tears of deep sadness began to well up in my eyes, but I held them back, not wanting to be distracted from the reason why I came here.  At long last I was in the place I had wanted to visit from an early age.  A place where I wanted to, somehow, breathe in the atmosphere and identify the echoes of the past that were now silently screaming at me.

I was walking through Auschwitz, the largest of the death camps meticulously planned and built by the Nazis to execute Hitler’s Final Solution and rid the planet of God’s chosen people, the Jews.

The sheer scale and size of Auschwitz Birkenau is shocking. What we went on to see was beyond human comprehension.  I was well prepared, or at least, as well prepared as one can be for a place like this, but it was overwhelming.

Auschwitz was an army barracks taken over by the Nazis after they swept into Poland and conquered the city of Krakow in a matter of days.  Here thousands of people had their freedom, their dignity, their right to exist and their humanity, brutally and calculably stripped from them.

They were made out to be inhuman by their captors, German Nazi officers, whose uniform bore the Nazi Auschwitz emblem of a skull on their right hand collar and cap.  The emblem was to ‘terrorise’ their prisoners into thinking they would never get out alive. And 1.1 million of them never did.

The barracks are made up of several blocks where prisoners were once held in appalling conditions while being starved and worked to death.  They slept either on the hard floor or crammed into wooden bunks and were beaten, tortured and ultimately destroyed.   We walked from block to block hardly saying a word for hours, not even thinking to eat or drink.

Each block held exhibits behind walls of glass. Piles and piles of hair, which was hacked from these beautiful women’s heads upon arrival. Then there were displays of shoes – mountains of them.  Every single one spoke to me about the person who would have carefully chosen and worn them. Strappy low-heeled sandals, smart men’s shoes, high heels of various colours and sizes, all piled up. The feet were gone but the shoes seemed to proclaim their owner.

These exhibitions continued. Piles of sturdy, leather suitcases, some bearing their owners names or initials. Prayer shawls, shoe polish and brushes, pots and pans, cooking utensils and so much more. Each one cherished by their owners to keep up their appearance or cook a loving meal for the family. These families were told they were heading to a new home. The new home they arrived at was one of the most horrific places man has created.

Then there was the piles of children’s toys and dolls – how precious, so very precious.  It is said that most of the children who entered the camps who were too young to work were led straight from the trains to the gas chambers.

Next came the display of empty gas canisters. Three to five of these canisters was enough to ‘finish the job’. The gas chambers themselves, most of which were burned down by the Nazis in an attempt to hide the evidence, bore the scratch marks on the walls made by men, women and children who clawed at the walls in desperation, trying to escape the poison that consumed them.

We looked upon rows and rows of photographs of men and women, the victims of this camp.  Etched in their faces was the deepest trauma; their haunting expression spelled death. Their images were a living horror that stared at us 70 years later. I wanted to look into their eyes so I didn’t forget them.

One image struck me. It was a huge image of stripped men, women and a child starved nearly to death.  These were the human guinea pigs used for horrendous ‘medical research’, no more than skin and bone. The child was crying and my heart wrenched with anguish for him and his mother. I wanted to somehow reach into that picture and help them… I so hope they are reunited in heaven.

Close by to Auschwitz is the beautiful city of Krakow which admirably keeps the story of the Holocaust alive.  Today the Jewish community there thrives with many synagogues and a square surrounded by shops and cosy restaurants.  Life goes on in the shadow of the world’s darkest hour. The people of Krakow seem to have a sense of pride and honour in their quest to carry the truth so that no one will ever forget the cost that was paid when good men did nothing in the sight of evil, until it was too late. 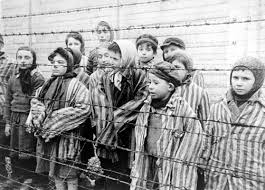 I’m so glad I went to that place. I feel I made a connection with something so close to God’s heart.  It has put a spur within me to take up God’s cause as many of our God-fearing forefathers had to lay down their lives for our freedom.  We must honour them and secure that freedom for our future generations.

On January 27, we celebrated Holocaust Memorial Day, a day to look back at the horrors of the Holocaust and declare, ‘Never Again’!

As Pastor Hagee says, if a line has to be drawn, draw it around Christians and Jews – we are united!