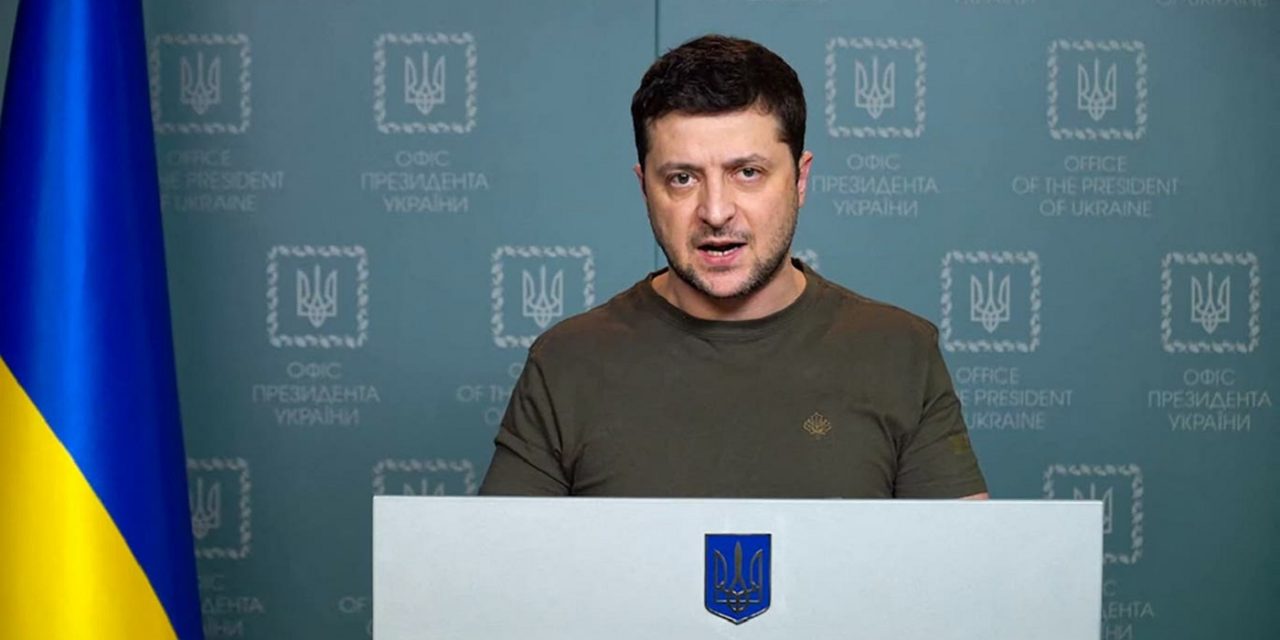 Ukraine’s President Zelensky has given an impassioned speech addressing Jews following the missile strike at the site of Kyiv’s main Holocaust memorial. President Zelensky, who is Jewish and the grandson of a Holocaust survivor, said, “The whole world promises, constantly promises ‘never again’”

The Russian missile targeted a TV tower, killing five people. The tower along with other buildings were constructed during the Soviet-era on the site of the Babyn Yar massacre, where over 33,000 Jews were executed by the Nazis in a fateful 48 hours in 1941. Today, a menorah and recently opened monument are situated at the site.

“For any normal person who knows our history, Babyn Yar is a special part of Kyiv. A special part of Europe. A place for prayer. A place of remembrance of the hundred thousand people killed by the Nazis. The location of old Kyiv cemeteries,” said Zelensky.

“What kind of a person would you have to be to make a place like this a target for missiles? You are killing Holocaust victims for the second time.”

“During the Soviet era, a TV centre was built there, on human bones. And a sports complex. Outbuildings. They built a park there. To erase the true history of Babyn Yar. But why was it bombed? This is beyond humanity.”

“Such a missile strike shows that our Kyiv is completely alien for many people in Russia. They know nothing about our capital. About our history. But they have an order to erase our history. Erase our country. Erase us all.”

Whilst President Zelensky was addressing Jews, his words need to be heeded by all people, including by Christians. We must not be silent in seeing the murder of innocent civilians in Ukraine, in seeing women and children in 2022 boarding trains to flee a European country and seeing young men going to fight. And as the strike at Babyn Yar solemnly reminds us, this is an ideological battle of values between good and evil.

“A threat to freedom everywhere”

CUFI’s Director of Public Policy and Strategy, Boris Zilberman, feels the current conflict acutely. He left the Soviet Union as a refugee when he was a child. While born in Moscow, his family comes from small villages and towns in the Pale of Settlements stretching from Lithuania to Ukraine. This area has seen hard times before, particularly the local Jewish populations which saw horrific destruction as the Nazis advanced during World War II and the pogroms before then.

The West did not believe the evil leaders of that era when they made their intentions clear. Putin is a revisionist leader looking to create a greater Russia once more. As a result, today in Ukraine we are seeing nothing less than a modern era pogrom aimed at the Ukrainian people – both Christians and Jews alike.

Zilberman adds that, “Putin has the audacity to claim he is engaged in ‘denazification’ when in fact he is indiscriminately attacking a western orientated democracy led by a Jewish President. It is about time we believe our enemies when they tell us who they are.”

We will keep the people of Ukraine in our prayers. We will also continue to stand watch as those who seek to destroy Israel or take advantage of this situation seek to advance their causes.