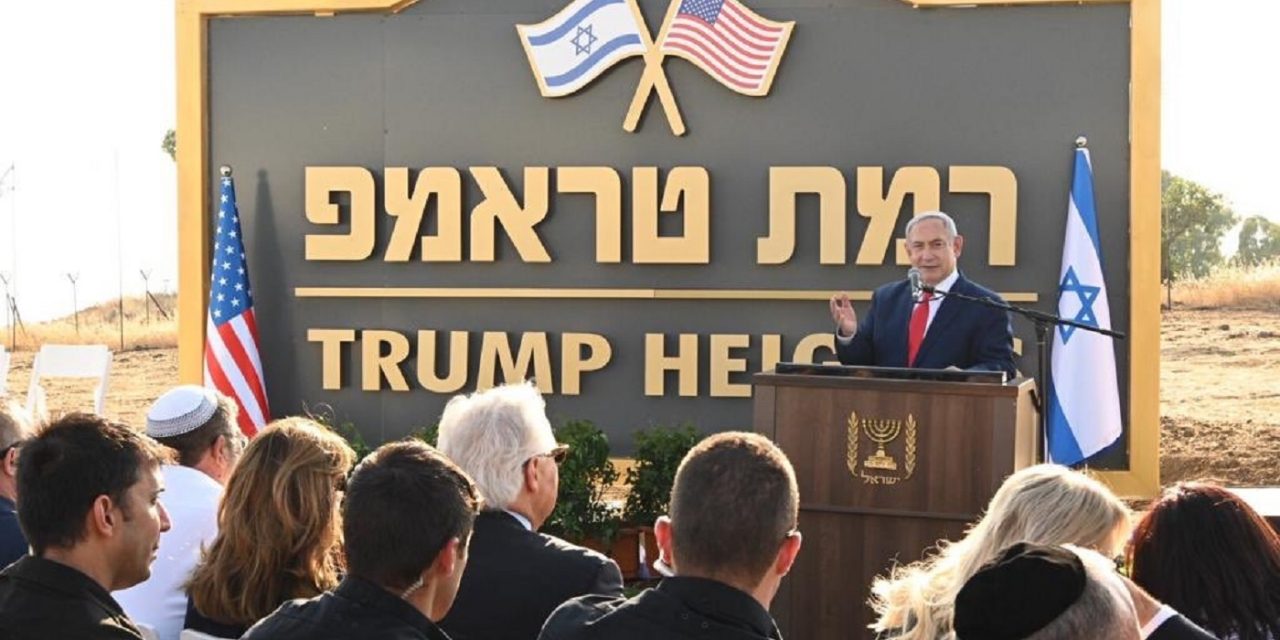 Israel has inaugurated a new Golan Heights community in honour of US President Trump.

On Sunday, Mr Netanyahu’s cabinet convened in Bruchim, a hamlet of 10 people, to rebrand it as “Ramat Trump”, Hebrew for “Trump Heights”, in a appreciation for America’s recognition of Israel’s sovereignty over the region.

“It’s absolutely beautiful,” said US Ambassador David Friedman, who attended the ceremony. Noting that Trump celebrated his birthday on Friday, he said: “I can’t think of a more appropriate and a more beautiful birthday present.”

A great day on the Golan. PM Netanyahu and I had the honor to dedicate “Trump Heights” — first time Israel has dedicated a village in honor of a sitting president since Harry Truman (1949). Happy Birthday Mr. President!! @POTUS pic.twitter.com/fdYWzokFLK

Addressing the ceremony, Mr Netanyahu called Mr Trump a “great friend” of Israel and described the Golan, which overlooks northern Israel, as an important strategic asset.

“The Golan Heights was and will always be an inseparable part of our country and homeland,” he said.

President Trump tweeted his thanks for the honour: “Thank you PM Netanyahu and the State of Israel for this great honor!” he tweeted after posting a clip of the festive ceremony at the proposed site.

At the special cabinet meeting that gathered at the northern Golan location to officially approve the first step toward building a new village, Netanyahu called it “a historic day” for two reasons.

The first was that it has been “many years,” as he put it, since a new community was established in the region, which only contains some 25,000 Jews in 30 kibbutzim and moshavim and one town.

“This is an act of settlement and of Zionism of the first order,” said Netanyahu, in a place that “was and always will be an inseparable part of our country.”

“The second thing,” he said, “is to honor our friend, a very great friend of the State of Israel, President Donald Trump, who recently recognized Israeli sovereignty over the Golan Heights. He is the first international leader to have done so. He tore the mask off this hypocrisy, which does not recognize what is self-evident.”

The prime minister also mentioned other gestures Trump has made that have been important to Israel, which include moving the U.S. embassy to Jerusalem, exiting the nuclear deal with Iran, and “standing steadfast against Iranian aggression in the Gulf of Oman, the Persian Gulf and the region in general.”

This is the first time that Israel has named a place for a sitting president since 1949, when the new state called a moshav Kfar Truman in honour of the president who had recognized the State of Israel just minutes after it was declared the previous year.

President Trump announced in March that the United States officially recognises Israel’s sovereignty over the Golan Heights, signalling a significant change in US policy towards Israel.

“After 52 years it is time for the United States to fully recognize Israel’s Sovereignty over the Golan Heights, which is of critical strategic and security importance to the State of Israel and Regional Stability!” Trump tweeted at the time.

Earlier today, @netanyahu and @USAmbIsrael held a ceremony for the inauguration of 'Trump Heights' — a town in #Israel's Golan Heights that has been named in honor of the US President.