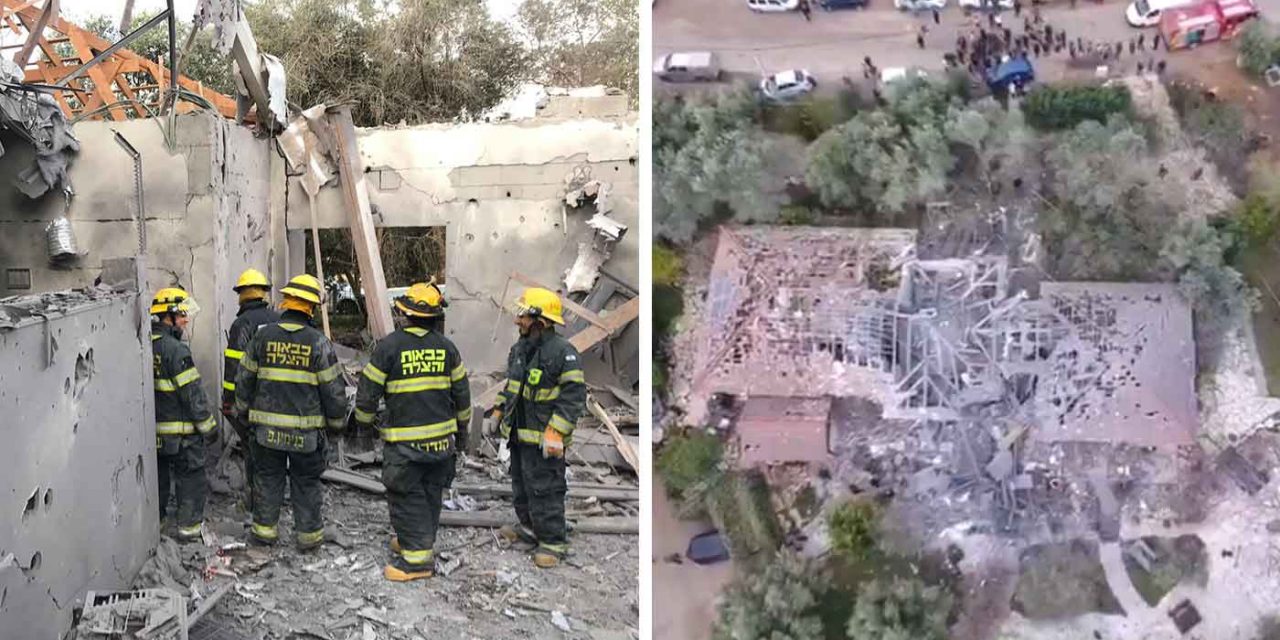 Seven people have been injured after a rocket fired from the Gaza Strip hit a house in central Israel.

The attack took place at 05:25 local time on Monday morning. The rocket hit a house in Mishmeret, an Israeli town 12 miles north of Tel Aviv, and was launched from Rafah in southern Gaza, about 75 miles away.

The explosion from the rocket severely damaged the house and set it on fire.

Israel’s Magen David Adom ambulance service said it had treated two women who were moderately wounded and five other people, including an infant, a three-year-old boy and a 12-year-old girl, who had minor wounds. The victims of the attack are said to be a British-Israeli family.

The blast also caused damage to at least one nearby home and several vehicles.

It is the furthest a rocket fired from Gaza has travelled into Israel since 2014, and one of the paramedics first on the scene said it was “a miracle that nobody got killed”.

Seven Israelis were wounded this morning after a rocket fired from #Gaza hit a residential house.

This attack is a deliberate act of aggression against Israeli civilians by Palestinian terrorists.

“We heard the siren and we didn’t think it was anything, but my daughter made us go into the reinforced room,” Smadar Castelnovo, who lives opposite the house that was hit by the rocket, told Reuters news agency.

“My daughter was upset because we had left the dog out. We went out to get the dog and as soon as we went back in there was a very loud boom.”

🔴 VIDEO: A rocket from #Gaza hit a house in central Israel this morning at 5:20am. Seven people injured as a result of this direct hit, including children. (Credit 📹- Dan Asulin) pic.twitter.com/v7XdS1zMTQ

Although the rocket triggered sirens in the Sharon and Emek Hefer regions, Israel’s Iron Dome missile defence system did not appear to have been activated.

The Israeli Defense Forces confirmed that Hamas was responsible for the rocket.

IDF spokeswoman Major Mika Lifshitz said, “It’s a Hamas rocket, itself made by Hamas… it has an ability to reach more than 120km.”

“We see Hamas as responsible for all that happens in the Gaza Strip,” she added.

We can confirm that #Hamas is responsible for firing a homemade rocket. It flew a distance of 75 miles across Israel and then destroyed this home: pic.twitter.com/nXytl8hcfl

Maj Lifshitz said the IDF was deploying two additional brigades to the area surrounding Gaza, and that there was a “very limited” calling up of reservists.

The Israeli authorities have also closed the Kerem Shalom and Erez border crossings with Gaza.

Israeli Prime Minister Benjamin Netanyahu, who is cutting short a trip to the US over the incident, said in a statement: “There was a criminal attack on the State of Israel, and we will respond forcefully.”

Hamas has so far not commented. However, according to witnesses, key personnel have been evacuated from government buildings, and the militant group has confirmed that its leader in Gaza, Yehiya Sinwar, has cancelled a public speech.

Islamic Jihad, another militant group, said: “We warn the Zionist enemy (Israel) from committing an aggression against the Gaza Strip.”

Please pray for Israel at this time; protection over her people and wisdom for her leaders.