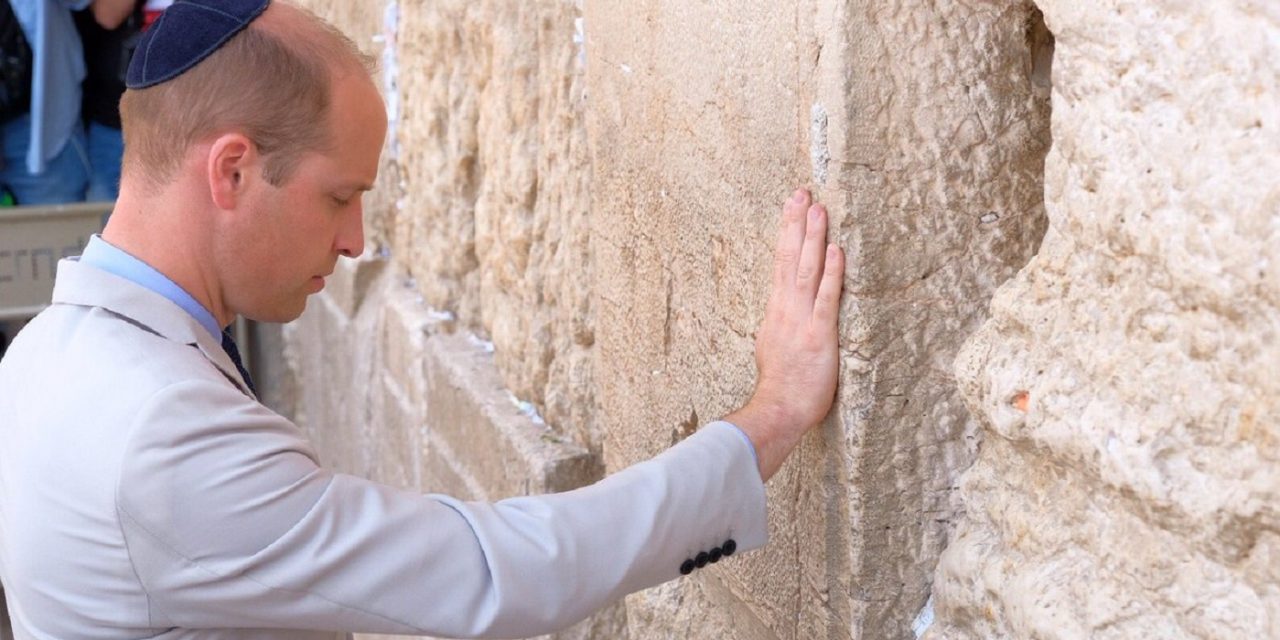 Prince William has become the first member of the British Royal Family to pray at the Western Wall.

In a truly historic moment, the second-in-line to the throne,  followed the centuries-old tradition of placing a written prayer in a crack in the wall and held his right hand against the ancient stones.

The powerful moment saw the Duke of Edinburgh shut his eyes and spend around a minute in silence.

Historic! Prince William has prayed at the Kotel (Western Wall), honouring the Jewish nation.Chief Rabbi Mirvis said the prince's priority was to pray for peace.Please like and share the video of this amazing day!Video credit: Mail Online#WesternWall #PrinceWilliam #RoyalVisitIsrael #Kotel #PrayforIsrael #UKIsrael #CUFI

Posted by Christians United for Israel – UK on Thursday, 28 June 2018

#PrinceWilliam becomes the first ever member of the British Royal Family to pray at the Western Wall #Jerusalem #Israel #RoyalVisitIsrael pic.twitter.com/uRCJfKBLy9

Chief Rabbi Ephraim Mirvis, who joined the duke at the holy site, said: “Today we experienced a moment of history which will live long in the memory of Jews around the world.

“The Western Wall stands at the epicentre of our faith. To see the future monarch come to pay his respects was a remarkable gesture of friendship and a sign of the duke’s regard for the sanctity of Jerusalem.”

Earlier in the day, Prince William began his visit with a lookout of the Old City from the Mount of Olives. He then paid his respects at the tomb of his great-grandmother, Princess Alice, who is buried in the Church of St. Mary Magdalene above the Garden of Gethsemane. She is recognised by Yad Vashem Holocaust Memorial as a member of the Righteous Among the Nations and by the British government as a “Hero of the Holocaust” for rescuing a Greek Jewish family during the Holocaust.

The Duke of Cambridge pays his respects at the tomb of his great-grandmother, Princess Alice, at the Church of St Mary Magdalene. pic.twitter.com/NOZH1oNKCo

The Duke then concluded his visit of the Old City by visiting the Church of the Holy Sepulchre, where some Christians believe was the site that Jesus died and was buried. However, the Prince didn’t visit the Garden Tomb, where Evangelical Christians believe Jesus was buried and rose again.