Prime Minister Benjamin Netanyahu on Sunday called on the world to condemn an arson attack against a makeshift synagogue in the West Bank where Torah scrolls were burned.

The scrolls were stored inside a tent that was used as a synagogue near a West Bank outpost that overlooked the site where the bodies of three Jewish teenagers were found in June 2014. Their abduction and murder was carried out by Hamas terrorists and set off a series of events that ultimately led to that summer’s 50-day Operation Protective Edge in Gaza.

Netanyahu said this weekend’s desecration of the makeshift synagogue that was named after the teenagers was a result of the type of Palestinian incitement that has fed the current five-month-long wave of Palestinian violence.

“We will do everything to find who did this and bring them to justice but I expect all those, here and around the world, who justifiably condemn any desecration of a mosque … to equally cry out about this heinous act,” he said at the start of his weekly cabinet meeting.

On Sunday, a Judea and Samaria Police Fire Department team determined that the fire at the makeshift synagogue was the result of arson.

According to locals, the tent serves as a place of prayer and other activities for the area’s children. Karmei Tzur residents said arsonists had put the books in a pile and let them on fire. The tent overlooks the spot where the bodies of the three teenagers who were kidnapped and murdered in 2014 were found.

Karmei Tzur residents said they were deeply shocked by the incident and that they felt a red line had been crossed. “It’s difficult to accept the fact that in the heart of the country, an incident has occurred that is reminiscent of the darkest history, and we must not forget that less than 100 meters separate the hill and the residents’ houses,” said a resident. “Reaching there is a dangerous precedent for the future. We must and can put an end to this.” 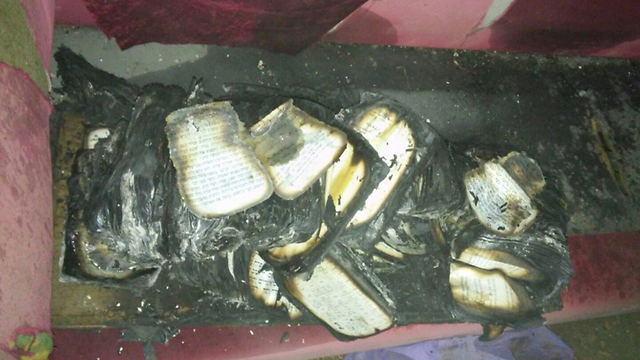 Burnt books, which residents say appear to have been put in a pile (Photo: Karmei Tzur Security)

Davidi Perl, head of Gush Etzion Regional Council said images of the fire’s aftermath were chilling. “I am certain that Holocaust survivors who went through Kristallnacht and founded Gush Etzion never dreamed this sight of burnt holy books would occur here in Israel under Israeli rule,” he said. “The Israeli government must defeat the Arab rampaging that is hurting human life and Israel’s holiness.”