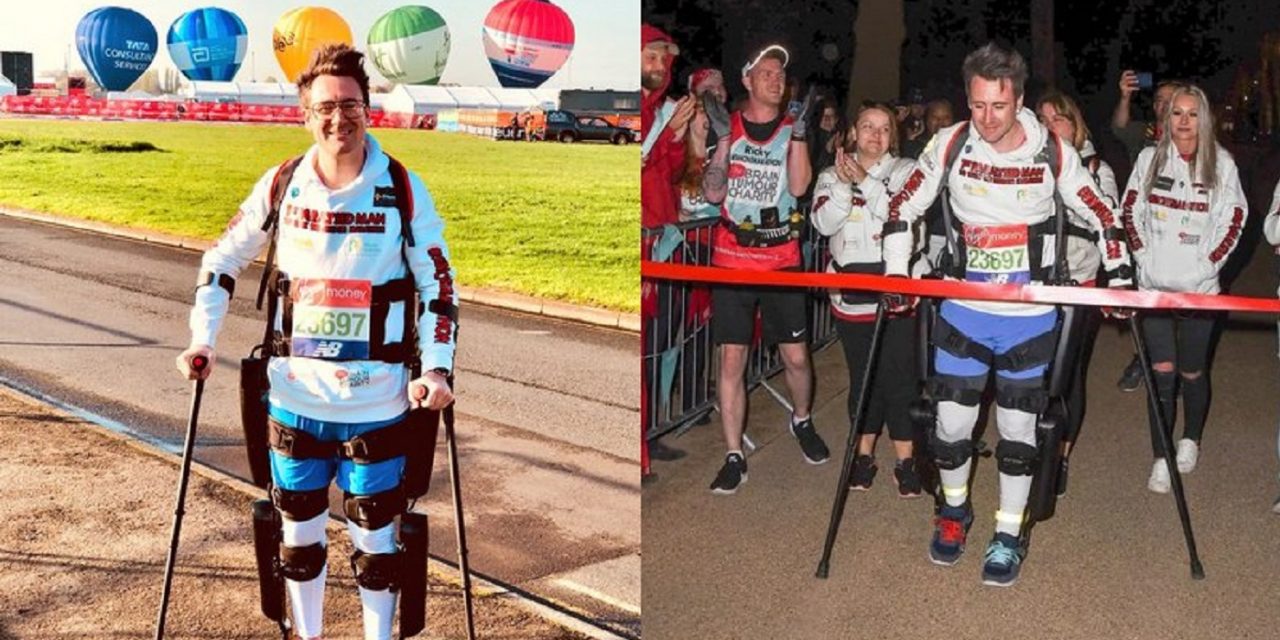 Britain’s Simon Kindleysides, a 34-year old man paralyzed from the waist down, has become the the first paralyzed man to complete the London Marathon, aided by an Israeli-made bionic suit.

He follows Claire Lomas, who became the first person to do so, completing the 2012 London Marathon using the same Israeli technology — the ReWalk exoskeleton, a suit for those with spinal cord injuries that helps them walk independently with the help of computers and motion sensors.

The 34-year-old, a father of three from Blofield, Norwich, was diagnosed with functional neurological disorder and a glioma brain tumour in 2013, which left him paralysed from the waist down.

“I’m exhausted, I’m not going to lie, ” Kindleysides said in a YouTube video the next morning, after he had walked 16 miles as drivers tooted and fans applauded. “I’m going to get to the finish line.”

The ReWalk exoskeleton allows independent, controlled walking similar to that of an able-bodied person, as computers and motion sensors do the “heavy lifting.” The suit hugs the legs of users as they walk, with crutches to stabilize them. Users wear a remote-control system on their wrists so they can control their movements. As they walk, sensors make sure that their chest remains upright and balanced, allowing them to take strides without falling. . It senses subtle changes in its user’s centre of gravity, meaning that leaning forward causes the suit to take a step forward.

“The support has just been overwhelming and like a dream come true,” Kindleysides told the Eastern Daily Press. “It is incredible because I didn’t expect it to be as big as it was. My children are getting great comments at school and they are very proud of their dad.”

“I just wanted to show that anything is possible if you put your mind to it,” he said. “You can stay in bed and feel sorry for yourself or get out and enjoy your life, because you are only here once.”

Kindleysides raised £6,500 for Brain Tumor Charity with his marathon walk.

However, because he didn’t finish the race on Sunday, Kindleysides has been refused an official medal. However he has received some medals from well-wishers and has also been awarded the Spirit of London award, which the London Marathon gives to participants who “encapsulated the unique spirit” of the race. He is the first finisher from this year’s race to be given the award.