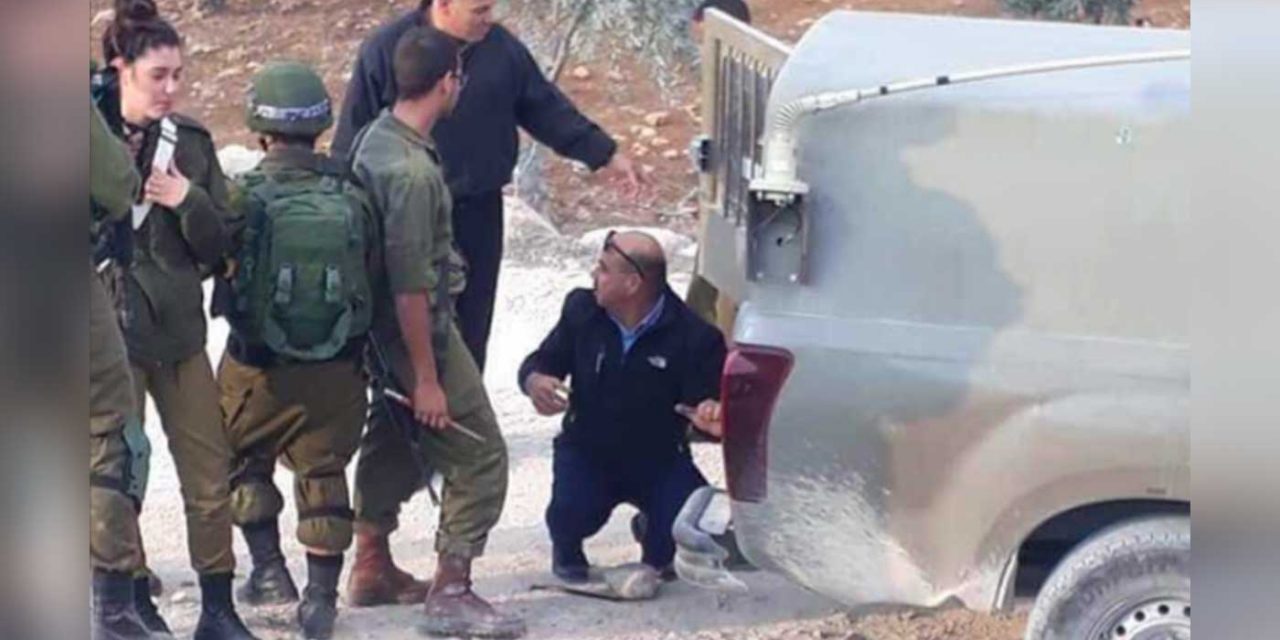 A local Palestinian police chief has been suspended after pictures of him helping Israeli soldiers to change a flat tyre were spread online.

Col. Ahmed Abu al-Rub, who is the police chief in the Hebron Governate, was suspended by his superior, Palestinian Authority police chief Hazem Atallah, who ordered an investigation into the incident.

According to reports, the Israeli jeep had been blocking a road due to its tyre being damaged. As the Israeli soldiers were unable to fix the problem, Abu al-Rub, who was in a separate vehicle waiting to pass the troops, stepped in to help.

Photos on social media showed al-Rub kneeling down behind an Israeli army vehicle with soldiers standing around him, sparking outrage by some Palestinians.

One Arabic tweet sharing the photo was captioned: “In a humiliating precedent, Colonel Ahmed Abu al-Rub, head of the Hebron city Police, works as a ‘mechanic boy’ and repairs a military jeep to the occupation forces.”

Kamal Makhamra, the secretary-general of a local Fatah branch, was also pictured standing near to Abu al-Rub and the soldiers when the incident took place.

Makhamra told Ma’an, a Palestinian news site, that a group of Fatah, Palestinian and humanitarian officials including himself bumped into the soldiers after providing aid to Palestinians in Susya, a village in the South Hebron Hills.

“On Sunday, we were undertaking an aid mission in Susya with several official and humanitarian bodies,” he said.

“After we finished providing the aid, we tried to leave the area, but there was a vehicle belonging to the occupation army blocking the road. It then became clear to us that the vehicle’s tire had been damaged. So the soldiers asked us for equipment to change the tire and [we gave them a tool].

“Thereafter, the soldiers tried to change the tire, but they were unable to do so. Following a long wait, Col. Abu al-Rub approached the soldiers and offered to help. He then successfully helped them [to replace the tire.] After that, we left the place.”

The Palestinian Authority has become unpopular domestically due to its security cooperation with Israel. It has threatened to cut ties several times with the Jewish state, but never followed through.