Palestinian PM says Israelis have ‘no connection’ to ‘real Jews’ 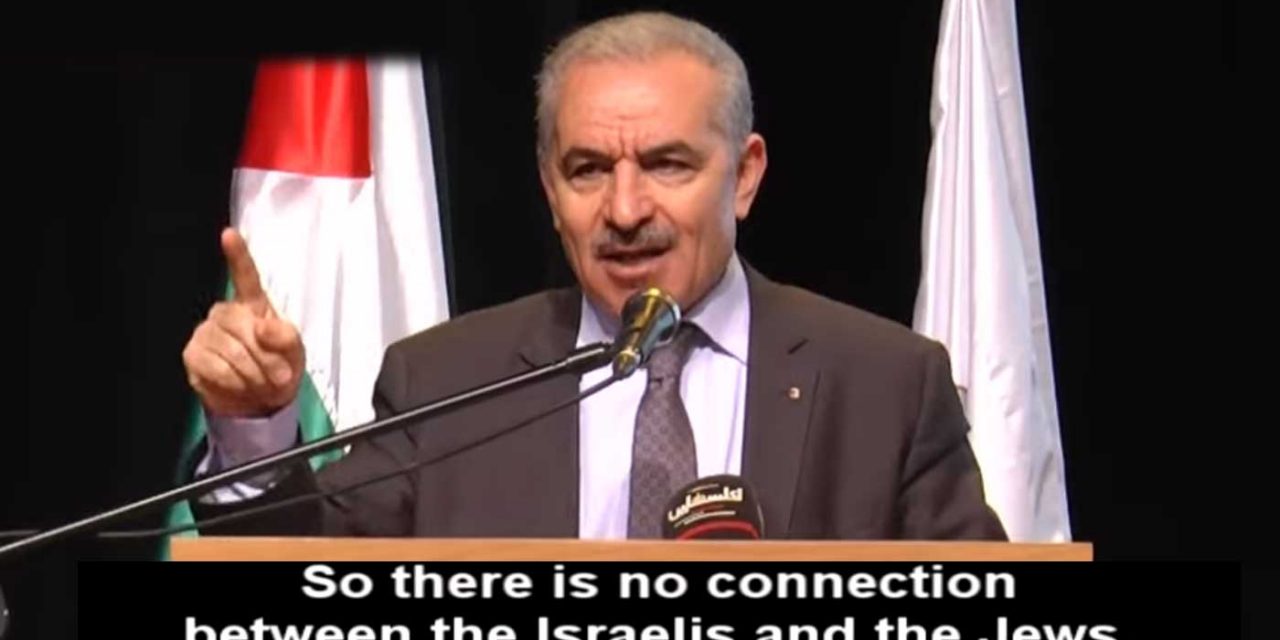 The Palestinian Prime Minister Mohammad Shtayyeh claims that today’s Israelis are not connected to the Jews of the past.

The outrageous claims were made by Shtayyeh in a public address aired on Palestine TV on 29th June 2021.

This is the latest attempt by the Palestinian Authority to undermine the Jewish connection to the land of Israel while attempting to strengthen their own flimsy claims to the land.

“The Hebrews, the Jews, and the Israelis are not the same thing,” Shtayyeh said.

Arguing that today’s Jews are not real Jews, having no relationship to ancient Jews, Shtayyeh then cited a common, discredited notion promoted by antisemites which purports that present-day Jews are all “Khazar” converts.

“The other key to the research is the Jews of today. Who are they? Without going into detail, they are the Khazar Jews who converted to Judaism in the sixth century C.E.,” he said.

“This issue requires research [and] there are many sources and books about the Khazar Jews,” he added.

In addition, Shtayyeh stated that Israel constitutes a “function” rather than a state.

“[A ‘function state’] is what was said and desired by Oliver Cromwell in 1652, by Napoleon Bonaparte in 1799, by the American consul in Jerusalem, and by [then British Foreign Secretary Arthur] Balfour,” he continued, adding that Theodor Herzl, the father of modern political Zionism, wrote to Balfour of his willingness to serve as a “function state” serving Britain’s interests.

It should be pointed out that his claims on all accounts are bogus. The Khazar claim neglects the fact that most Jews who emigrated to Israel came from the Middle East, not Europe. It aligns itself with the false claims of “colonialism by white Europeans” that are spoken by anti-Israel groups in the West as another false attempt to delegitimize the Jewish connection to Israel.

The truth is that the Jewish people are the only people on earth who were given the land of Israel by God Almighty. The Jews have been persecuted throughout history, and yet are the only people to maintain their identity and faith throughout millennia of persecution. These claims that Israelis are not “real Jews” perpetuate the lies of the devil. They are nothing more than attempts to undermine God and should be rejected by anyone of sound mind.

It is therefore shameful that the Palestinian leadership, including someone who hosts world leaders including British politicians, would be spouting such anti-Semitic lies.