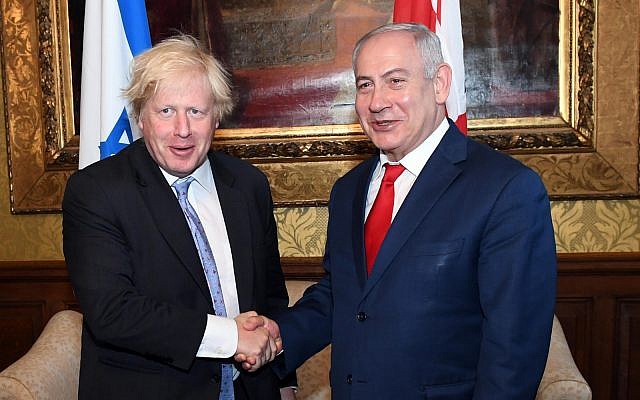 Britain’s Foreign Minister Boris Johnson urged Prime Minister Benjamin Netanyahu Wednesday to open an independent investigation into the dozens of Palestinians killed by Israeli troops during violent protests on the Gaza border over the past several months.

Meeting Netanyahu during the Israeli premier’s visit to London, Johnson condemned “incitement and rocket fire against Israel,” but said that the UK was worried about the worsening situation for Palestinians in Gaza.

“We are very concerned by the deaths of over 120 Palestinians in recent weeks and the deteriorating situation in Gaza,” Johnson told Netanyahu.

The foreign minister said there was “a need for Israel to carry out a transparent, independent inquiry into the loss of more than 120 Palestinian lives during the recent Gaza protests, as well as over 10,000 injuries.”

Earlier this month, the UK abstained from a United Nations Security Council resolution which called for an inquiry into the deaths.

It is good that the UK is condemning Hamas’s rocket attacks, but what is shocking is that our government appears to be siding with the terrorists when it comes to recent border clashes.

Hamas is a terrorist organisation banned by the UK. Hamas leaders have said, live on television, that these border protests are not peaceful, but they have placed armed militants amongst the crowd. There is also video evidence online showing some of the attacks taking place, where armed terrorists shoot at Israelis from amongst crowds of Palestinian civilians.

There are very few international investigations being called for all other wars, confrontations and war crimes. Israel is singled out by the international community and it is wrong for our government to align themselves with those who hate Israel.

It is time our country stands up for our ally Israel. The simple fact is that Hamas, a terrorist organisation, is responsible for every death in the Gaza conflict.