Marwan Barghouti, the Palestinian “hero” caught eating during the hunger strike he ordered 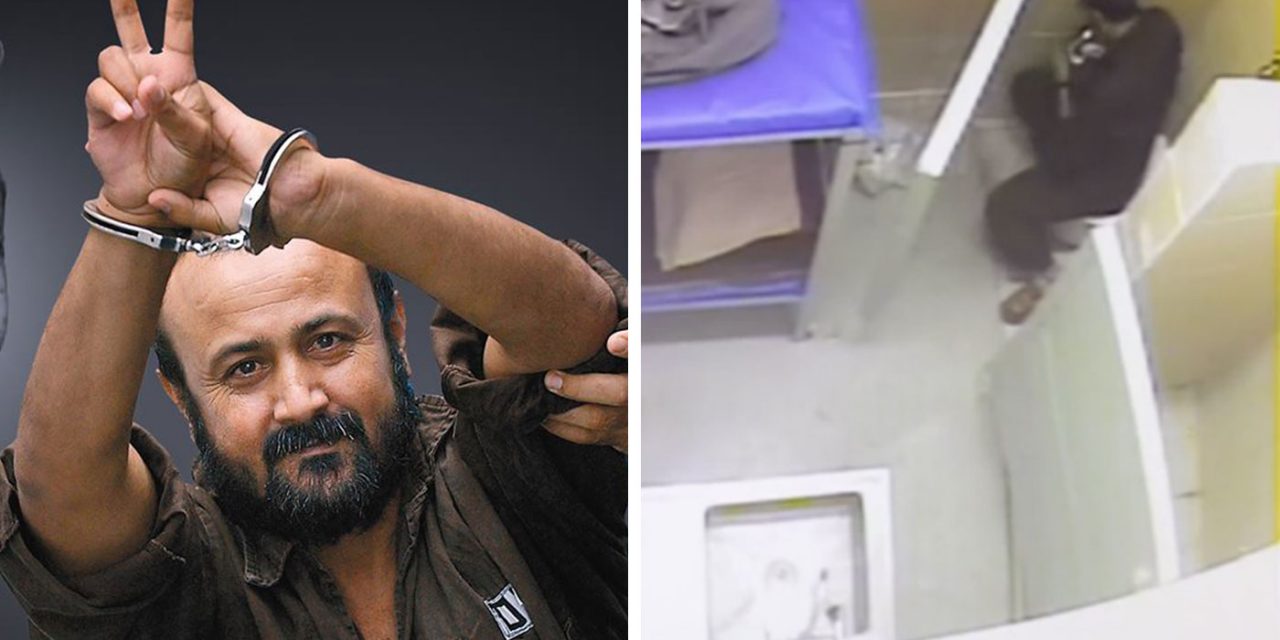 Marwan Barghouti, the Palestinian leader and “hero” who is currently leading a hunger strike has been caught on camera eating food on two separate occasions. A spokesman for the Israel Prison Service said the video “speaks for itself”.

In each video the hardened terrorist is seen hiding out in a toilet cubical, checking that no one is watching. He is fully clothed while sitting on the toilet and can be seen putting something his mouth. It is claimed he consumed cookies, a candy bar and salt. The first recording is from April 27 and the second is from May 5. Barghouti eats the treats before flushing the wrappers down the toilet and washing his face and hands.

Palestinian advocates have denied the claims, saying the videos are from 2004, but others have owned up to the fact the clips are genuine and are using it to accuse Israel of abusing Barghouti, and using psychological torture against him. Because offering a man cookies and him eating and enjoying them apparently displays Israel’s torture of prisoners.

Barghouti is the leader of the hunger strike and he announced the strike in a controversial article in The New York Times. The newspaper came under heavy criticism for publishing the op-ed, where they described Barghouti as a “Palestinian leader and parliamentarian”, with no mention of his terrorist activities or convictions.

Palestinian prisoners reportedly began striking on April 17 because they want the following accommodations in Israel’s prisons:

Initially, 1,500 Palestinian inmates reportedly refused food, but according to Israeli officials only 800 prisoners remain on strike.

While the Palestinians are making a lot of noise about this strike, you will notice from the videos that the conditions inside the prison do not appear as bad as some may claim. These are convicted terrorists and murderers and yet they are being treated to better living conditions than many prisoners around the world. And Barghouti himself has experienced Israeli favour while in prison, being able to earn a PHD in Political Science while serving time.

Barghouti was able to complete his thesis with the help of hundreds of books and documents that Israeli authorities allow inmates to bring into prison. And there are hundreds of Palestinian prisoners who are currently enrolled as students with the Open University of Israel, which facilitates their studies by allowing them to sit exams in jail.

The Israeli government has dismissed the strike as a political act, with Israeli Public Security Minister Gilad Erdan calling Barghouti a “hypocrite.”

“As I said from the very beginning, this hunger strike was never about the conditions of the convicted terrorists, which meet international standards. It is about advancing Marwan Barghouti political ambitions to replace Abu Mazen,” Erdan said, referring to Palestinian Authority President Mahmoud Abbas by his nickname.

“Barghouti is a murderer and hypocrite who urged his fellow prisoners to strike and suffer while he ate behind their back. Just like he lied to the world when he wrote in The New York Times that he decided to strike in order to protest ill-treatment, he lied to the Palestinian public when he claimed to be striking. Israel will not give in to extortion and pressure from terrorists,” Erdan added.