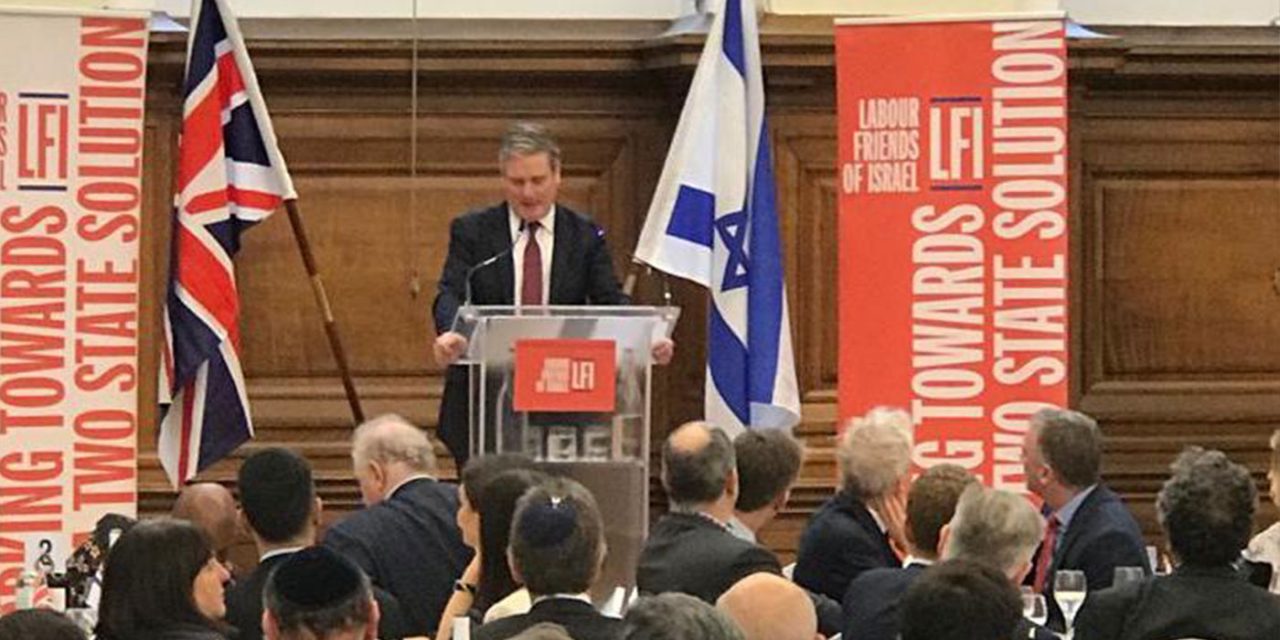 Sir Keir Starmer this week said that “anti-Zionist anti-Semitism is the antithesis of the Labour tradition.”

The Labour leader was speaking at the Labour Friends of Israel annual lunch where he was addressed supporters of Israel within the party and laid the foundation for how Israel would be viewed under his leadership.

Starmer said, “Anti-Zionist antisemitism is the antithesis of the Labour tradition: It denies the Jewish people alone a right to self-determination; It equates Zionism with racism, focuses obsessively on the world’s sole Jewish state, and holds it to standards to which no other country is subjected; And it seeks to paint the actions of Israel as akin to the crimes of those who sought to annihilate European Jewry in the Shoah [Holocaust].”

“Anyone who has visited a Holocaust memorial, a concentration camp or spoken with a Holocaust survivor will be struck by the cruelty of that charge, will have grasped the resolve of Israel’s founding fathers to make a reality of the words “Never Again” and will understand why – for so many Jews – Israel will always stand as the ultimate guarantor of their safety.”

Sir Keir Starmer is trying to win back support from the Jewish community after years of the party failing to tackle anti-Semitism and instead promoting anti-Israel policies, including support for BDS, under the previous leader Jeremy Corbyn.

Later in his speech he paid tribute to his wife Victoria’s Jewish family as he admitted his work on tackling antisemitism was not complete.

He said: “Our work is by no means yet complete, but I give this pledge to you today: “We will not give up this fight against this kind of racism, bigotry, and hatred… until it is finally won!”

Starmer also confirmed Labour’s opposition to BDS policies. “And let me be clear, too, the Labour party does not and will not support BDS,” he said. “Its principles are wrong – targeting alone the world’s sole Jewish state.”

However, he also spoke out against actions Israel’s alleged actions, saying, “We will fully oppose and also condemn illegal settlements, annexation and the eviction of Palestinians from the Occupied Palestinian Territories.”

He clarified that while Labour opposes these things BDS isn’t the answer.

“We believe that international law should be adhered to – but a policy of BDS would be counterproductive,” he said.

Sir Keir’s speech is in line with what we would expect from the party. Starmer is clearly more supportive of Israel than Jeremy Corbyn who was openly supportive of BDS and holds extremely anti-Israel views. However, the Labour party (and indeed the UK government itself) are still not in alignment with everything we believe at CUFI.

The UK government, for example, regularly condemns Israel for building homes for Israelis in Judea and Samaria (the West Bank). We do not agree with the characterisation that these are “illegal settlements”, instead we take the view that these Israeli towns are legal under international law. So we disagree with this statement from Sir Keir, just as we disagree with it from the government.

Sir Keir also gave his speech whilst standing between two banners that read “Working Towards a Two-State Solution”. This phrase is supported by our government also, but it again goes against the Biblical teaching that the entirety of Israel was given to the Jewish people by God.

Keir Starmer’s Labour party is more friendly with Israel. However, there is a way to go for both Labour and the Conservatives before they are fully aligned with the views of Christian Zionists.