Israel, US and Russia meet in Jerusalem for “historic” talks 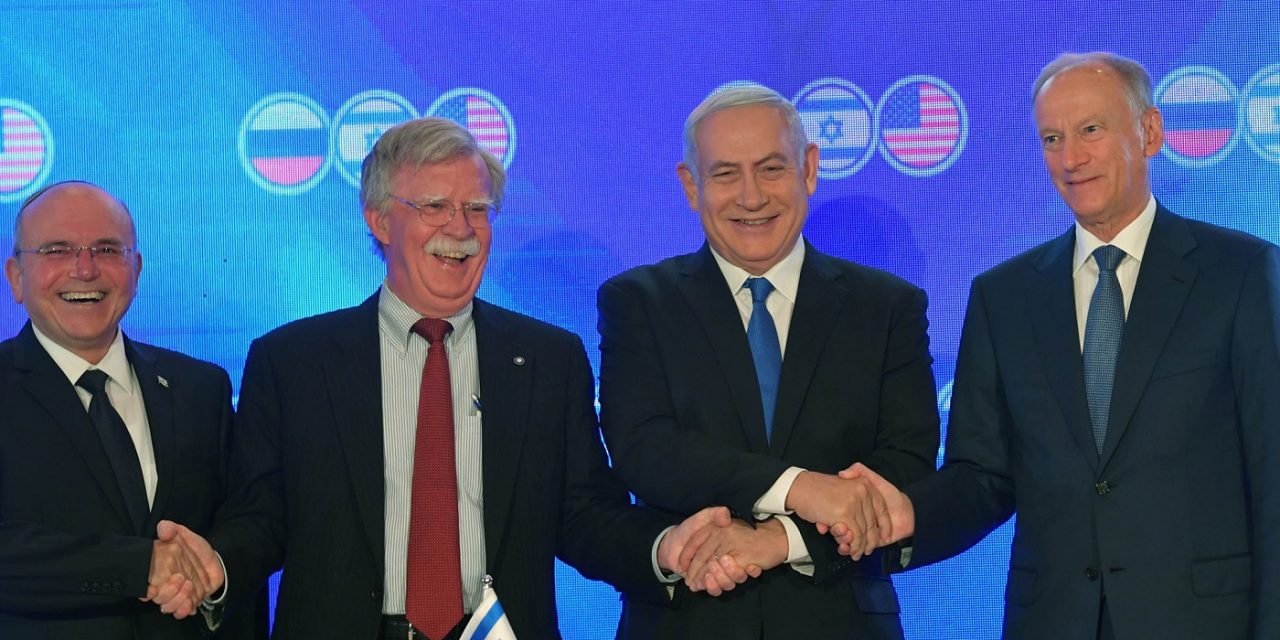 In an “unprecedented” development, three countries – Israel, Russia and the United States – met in Israel’s capital Jerusalem for a security meeting to discuss regional issues.

The trilateral meeting – the first ever in Jerusalem – took place with the participation of Nikolai Patrushev, U.S. National Security Adviser John Bolton, and their Israeli counterpart, Meir Ben-Shabbat.

Whilst Israel and Russia disagree over policy concerning Syria, Iran will be nervous that its ally is in Jerusalem for talks at a time when it has escalated tensions with the US.

At the centre of the agenda is Iran’s presence in Syria. In addition, recently stepped-up tensions between Tehran and Washington have made the security summit “even more timely,” Bolton said on Sunday.

“We will do everything to prevent it [Iran] from attaining nuclear weapons,” Netanyahu repeated Tuesday.

“Our joint goal is to advance substantive dialogue together with the U.S. in order to deal with the complex security challenges of our region while expressing commitment to Israel’s security,” the prime minister said of the objective of the American-Russian-Israeli meeting, which has been touted as unprecedented.

As Israel has acted against Iranian entrenchment in Syria, it has coordinated frequently with Russia, which is a key player in the war-torn country. The U.S. has been consulting with Israel over a pullout of American troops from Syria.

“I would like to state as clearly as possible that cooperation on the security level between Russia and Israel has already contributed greatly to security and stability in our region and has led to substantial change in the situation in the region,” Netanyahu said upon greeting the Russian national security secretary.

“I hope that this trilateral dialogue will assist in expanding stability and security in the region,” the prime minister added.

Meanwhile, John Bolton repeated twice to reporters that Iran “should not mistake [restraint] as a sign of weakness.”

Iran must halt its pursuit of nuclear weapons and “all options are on the table” until it does, US National Security Advisor John Bolton told reporters in Jerusalem on Tuesday.

“They should give up their pursuit of deliverable nuclear weapons. They should make that strategic step, they have not done it yet,” Bolton said.

Prior to the meeting, Bolton said, that US President Donald Trump “has held the door open for real negotiations, to completely and verifiably eliminate Iran’s nuclear weapons program, it’s pursuit of ballistic missile delivery systems, it’s support of international terrorism and its other maligning behavior worldwide.”

“All Iran needs to do is walk through that open door,” he explained.

Bolton noted that other top US officials – Secretary of State Mike Pompeo and US envoy on Iran Brian Hook – were also in the region to discuss Iran with Arab leaders.

“As we speak, US diplomats are surging across the Middle East seeking a path to peace,” Bolton said. “In response Iran’s silence is deafening,” he added.

“Iran’s provocations, which also include threats to and acts upon American personnel and assets in the Middle East, are the external manifestations of the essential threat Iran poses, namely its continued pursuit of deliverable nuclear weapons,” Bolton said.

“There is simply no evidence that Iran has made the strategic decision to renounce nuclear weapons and open realistic discussion to demonstrate that decision,” he added.

“In just a few days – perhaps by the the end of the week – Iran has threatened to exceed the key limits possessed by the inadequate 2015 nuclear deal, exposing once again the fatal deficiencies of that failed agreement,” Bolton said.

“All around the Middle East, we see Iran as the source of belligerence and aggression,” he said, giving as examples its support of Hezbollah in Lebanon, its assistance to the regime of Syrian President Bashar Assad, the arming of militia groups in Iraq, the weaponizing of the Houthis in Yemen, its support of terrorist activities against US forces in Afghanistan and its threat to oil supplies.

Bolton said that the trilateral meeting was taking place at a “particularly critical moment.” The US envoy also spoke glowingly of Netanyahu’s leadership and the role he plays in maintaining Israeli security.

Patrushev pledged his support to the joint battle against terrorism, which his country is waging alongside Israel and the US, particularly against ISIS.

“It is extremely important to guarantee Israel’s security,” he said, recalling that there are two million Russians living in Israel.

But he said that it is also important to respect other regional powers, hinting at Iran and noting that, “if we ignore them, we won’t achieve results.”

Russia is opposed to Israeli sovereignty over the Golan Heights, and Patrushev hinted at that opposition in his remarks. “There should be a peaceful, prosperous and sovereign Syria,” he said.

Netanyahu said the trilateral meeting showed that there was“a wider basis for cooperation between the three of us than many believe. This summit represents a real opportunity to help advance that stability in our region, particularly in Syria.”

Netanyahu thanked Russia for working out a deconfliction mechanism with Israel, which allows it to operate in Syria without the risk of harming Russian forces in Syria.

“All three of us [Israel, Russia and the US] would like to see a peaceful, stable and secure Syria,” Netanyahu said.