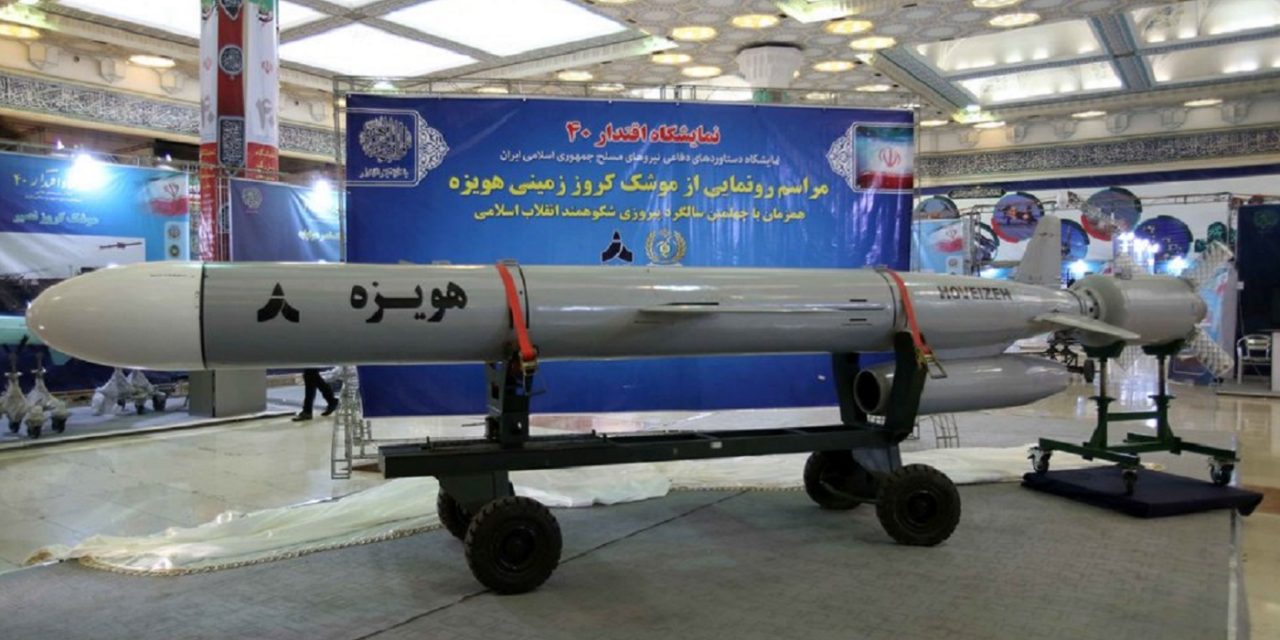 Iran on Saturday said it had successfully fired a new long-range cruise missile, amid events marking 40 years since the 1979 Islamic Revolution.

The missile, dubbed Hoveyzeh, was described as a high-precision weapon capable of flying at low altitudes and able to carry a significant payload.

“The test of the Hoveizeh cruise missile was carried out successfully at a range of 1,200 kilometers (840 miles) and accurately hit the set target,” Iranian Defense Minister Amir Hatami said, quoted on state television which broadcast footage of its launch.

“It can be ready in the shortest possible time and flies at a very low altitude,” he said.

In the 37-second video, the launch was shown from different angles with the projectile finally hitting somewhere in the desert.

#Iran on Saturday unveiled ‘#Hoveizeh’ long-range cruise #missile which has been fully designed and manufactured by the country’s #military experts. pic.twitter.com/xkCurUVlEa

Then on Thursday, Iran unveiled a ballistic missile with a range of 1,000 kilometers (620 miles).

The surface-to-surface missile — called Dezful — is an upgrade on the older Zolfaghar model that had a range of 700 kilometers (435 miles), aerospace commander Brigadier General Amirali Hajizadeh said.

#IRGC on Thursday unveiled #Dezful smart surface-to-surface ballistic #missile with a range of 1,000 kilometers (620 miles), indicating #Iran's latest #military might as it celebrates the 40th anniversary of the #IslamicRevolution. pic.twitter.com/qiiO0Sman2

The semi-official Fars news agency, close to the Guard, described the location as an “underground city.”

The facility’s location was not specified and pictures published by Sepah News showed only the two commanders in a room examining the missile.

“Displaying this missile production facility deep underground is an answer to Westerners … who think they can stop us from reaching our goals through sanctions and threats,” Jafari was reported as saying.

“Europeans talk of limiting our defensive capability while they have the audacity (to allow) their offensive power be used to attack innocent people all over the world,” he added.

Hajizadeh said the new missile had a “destructive power” twice that of the Zolfaghar version, which Iran used for the first time in October to strike a jihadist base in Syria.

Iran says it has voluntarily limited the range of its missiles to 2,000 kilometers (1,250 miles), but that is still enough to hit its arch-enemy Israel and US bases in the Middle East.

The US and its allies have been demanding that Iran curb its production of ballistic missiles, which can reach parts of Europe and could soon reach the US as well.  UN Security Council Resolution 2231 — adopted just after the nuclear deal — calls on Iran “not to undertake any activity related to ballistic missiles designed to be capable of delivering nuclear weapons”.

Tehran, which calls for the destruction of Israel, insists that it sees the missile program as crucial to its defensive posture, and says its existence is non-negotiable. It has also maintained that it never intended to develop nuclear weapons and therefore its missile development does not violate the agreement.