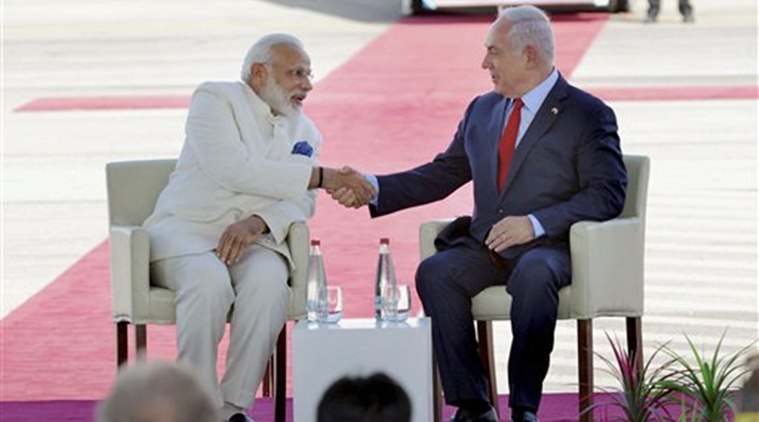 His trip, the first of its kind for an Indian premier, included new economic deals, and time spent with Netanyahu to deepen their relationship.

They ended the trip with a visit to Olga Beach in the northern coastal city of Haifa, strolling in the shallow water with an opportunity to test-drive a seawater distillation vehicle.

Thank you my friend, PM @netanyahu for the signed photo, your kind words, amazing hospitality & passion towards #IndiaIsraelFriendship. pic.twitter.com/1jUtMG3F85

The pair spent much of the trip side-by-side showing strong relations after 25 years of diplomatic relations.

The trip was also notable for the Indian Prime Minister not visiting Palestinian leaders, a contrast to other world leaders’ visits to Israel.

Here is the trip in more detail, sourced from the Indian Express:

Israeli Prime Minister Benjamin Netanyahu himself was at the Ben Gurion Airport to receive Modi when he landed there on Tuesday. The Indian Prime Minister was given a grand official welcome and was warmly embraced by Netanyahu who told Modi, “Aapka swagat hai mere dost.” Modi also thanked his Israeli counterpart for receiving him and emphasised that India considers Israel as an important development partner. He also hailed the sacrifices of Yonatan Netanyahu who was killed during Operation Entebbe.

From the airport, Modi headed to Danziger “Dan” Flower Farm. Here he got a flower named after him as a token of remembrance. He also visited Yad Vashem, the Hall of Names, attended the memorial ceremony in the Hall of Remembrance, toured the Children’s Memorial and signed the Yad Vashem Guest Book. He also made an unscheduled stop at Mt. Herzl in Jerusalem to pay respect to the modern Zionism founder.

On the second day, PM Modi met President Reuven Rivlin in Jerusalem and recalled Israel’s First Citizen’s visit to India last year. “The President of Israel welcomed me so warmly, he broke protocol. This is a mark of respect for the people of India,” PM Modi tweeted. Hailing the ties between the two nations, Modi said, “I for I. Which means India for Israel and Israel for India.” Later he met Benjamin Netanyahu over talks to enhance ties between the two countries. Both the ministers addressed the media for a joint statement in which they focused on terrorism called for global cooperation in fighting the menace.

Held talks with @PresidentRuvi. We discussed a wide range of issues pertaining to #IndiaIsraelFriendship & other global issues. pic.twitter.com/4GEdikh9rG

In a special gesture, PM Modi met Moshe Holtzberg, the Israeli child who survived the 26/11 Mumbai terror attacks, and invited him to India. He also met Moshe’s Indian nanny Sandra Samuels, who managed to escape with the child when the terrorists attacked.

It was an emotional moment to meet young Moshe, his maternal & paternal grandparents and Ms Sandra Solomon, his nanny. pic.twitter.com/jI93JBSDp1

Benjamin Netanyahu called Modi’s visit groundbreaking and said that he sees ‘history in making’ in their talks. India and Israel then signed seven agreements in key areas like space, water management, energy and agriculture. A Memorandum of Understanding was signed to set up $40 million worth India-Israel Industrial Research and Development (R&D) and Technical Innovation Fund.

Two agreements were signed in the sector to increase cooperation on water conservation and state water utility reform in India. Both the countries also agreed for India-Israle Development Coopeartion, a three year work programme in the agriculture sector. They also launched a five-year technology fund.

Later PM Modi addressed the Indian community in Isreal at Tel Aviv Convention Centre. During the meeting, Modi announced that Israeli citizens of Indian origin would be given Overseas Citizen of India (OCI) cards, even if they have served in the Israeli military. He also promised direct flights connecting the two countries. “The Jewish community has enriched India with their contribution in various fields. Israel has shown that more than size, it is the spirit that matters. Our ties with Israel are about mutual trust and friendship,” Modi said.

PM Modi also announced that an Indian Cultural Centre would be set up in Israel. He also invited the Israeli companies to come and participate in the ‘Make in India’ initiative of the government. He emphasised on the ease of doing business in India which had recently adpoted GST.

Prime Minister Modi gifted replicas of two sets of relics from Kerala that are “regarded as key artifacts in the long Jewish history in India” to his Israeli counterpart. Modi also presented him with a Torah scroll donated by the Paradesi Jewish community in Kerala and a metal crown from South India.

The two leaders made a joint statement on varied fields like terrorism, technology and defence. On the developments pertaining to the Israeli-Palestinian Peace Process, the leaders reaffirmed their support for an early negotiated solution based on mutual recognition and security arrangements.

At Haifa, paid tributes to the brave Indian soldiers who fought courageously in the First World War. pic.twitter.com/2D7UYKhHwh

On the last day of his trip, PM Modi along with PM Netanyahu paid homage to the soldiers in Haifa. He laid a wreath at the cemetery that contains the graves of Indian soldiers who had died during the First World War. He also unveiled a plaque commemorating Major Dalpat Singh, known as the ‘Hero of Haifa’ for his critical role in the liberation of the city.

Later he visited Dor Beach with his Israeli counterpart. Both the leaders were seen enjoying the light breeze at the beach. Modi was also given a demonstration of a mobile seawater desalination unit.

Post his historic visit to Israel, the prime minister is scheduled to fly to Germany to attend the G20 Summit.

I thank the people and Government of Israel for their hospitality. This successful visit will add more energy to India-Israel relations. pic.twitter.com/sreMPExX9i