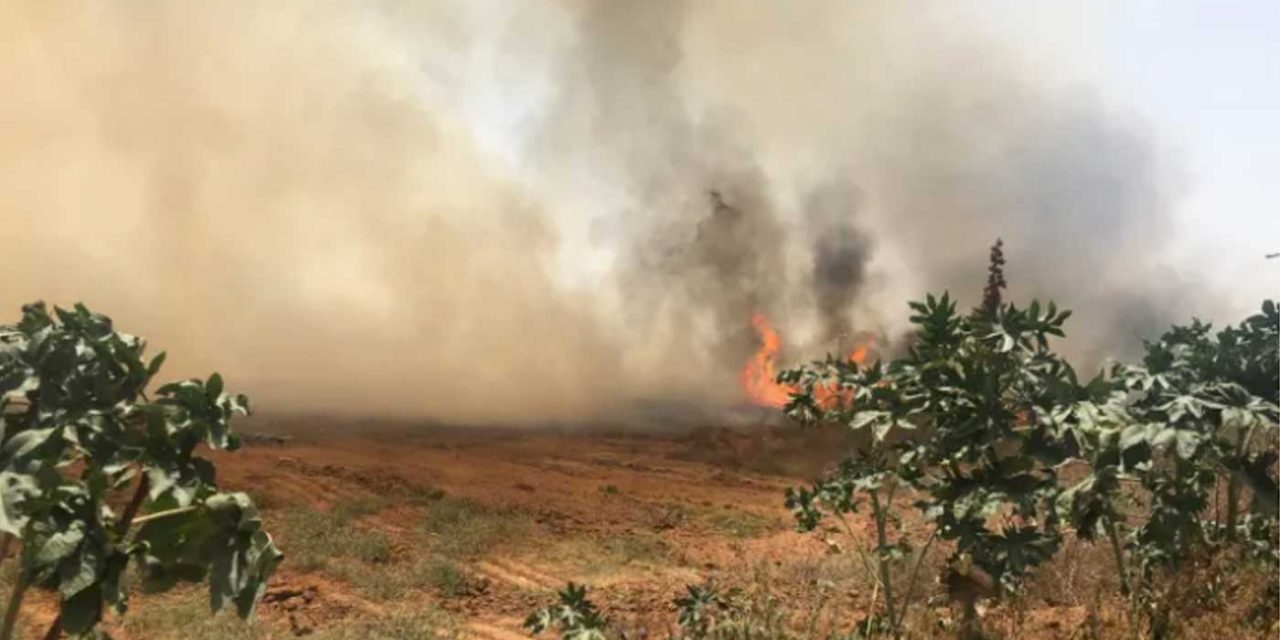 Extreme heat caused fires to rage across Israel on Wednesday, as police evacuated residents throughout the country from hundreds of homes, 15 of which caught fire.

Israel’s fire service declared a state of “Red Alert” whereby all the firefighters, as well as volunteer firefighters, are called up to help extinguish forest fires that have engulfed Israel. “Red Alert” is the highest level of readiness.

Five people from throughout the country, three men aged 64, 60 and 35 and two women aged 70 and 41, were lightly injured from smoke inhalation.

Fires have concentrated in three areas: Or Yehuda, Wadi Ara and Beit Shemesh.

In the city of Or Yehuda, south of Tel Aviv, five homes caught on fire and residents were evacuated from their homes, police say, and some 200 houses in the towns around Wadi Ara were evacuated due to nearby fires.

Residents were also evacuated from Shavei Shomron in Judea and Samaria (the so called West bank). An additional fire broke out in Neot Kedumim near Mod’in, where 15 residents were evacuated, and the Mitkan Adam army base was evacuated as well.

Police said the fire at Ramat Pinkas had spread throughout the neighborhood. “Immediately after the incident began, the residents were evacuated due to heavy smoke,” the police added.

According to firefighters, a fire broke out in an open area east of Highway 4 after brush ignited. “Due to the intense winds, the fire is spreading rapidly, so most firefighting forces are concentrated on the western houses of Ramat Pinkas and the southern area of Or Yehuda,” authorities say.

The first massive fire broke out in the Nesher neighborhood of Haifa near the Technion-Israel Institute of Technology, forcing police to temporarily close Route 2, as the school’s security forces sent an evacuation notice to students on campus. Two men suffered light injuries due to inhaling smoke and were treated by MDA personnel on the scene.

Due to winds and inclement weather, firefighters are managing the situation on foot, without the help of firefighting planes.

Wednesday’s temperatures are the highest measured since the establishment of the State of Israel, and second only to the peak temperature of 54 degrees Celsius (129 Fahrenheit) in 1942, measured in the Jordan Valley.

Israel’s Health Ministry warned the elderly and chronically ill against heat exposure and unnecessary physical exertion amid the heatwave. The Firefighting and Rescue Commission called on the public to avoid trying to put out fires themselves due to risks of causing the flames to spread further. They also said that firefighting units have been maximized in anticipation of the fires.

Whilst a number of places have been evacuated, it is thought most of the fires are no contained. There is a real danger that if the high heat continues they could spread or new fires could start. There is also a risk that Palestinian terrorists could take advantage of this situation and start more fires with incendiary devices.

We need to pray for the protection of Israel and for those battling the blazes.