Corbyn’s message to pro-Palestinian rally ONLY condemns Israel; not Hamas or rockets that killed Israelis 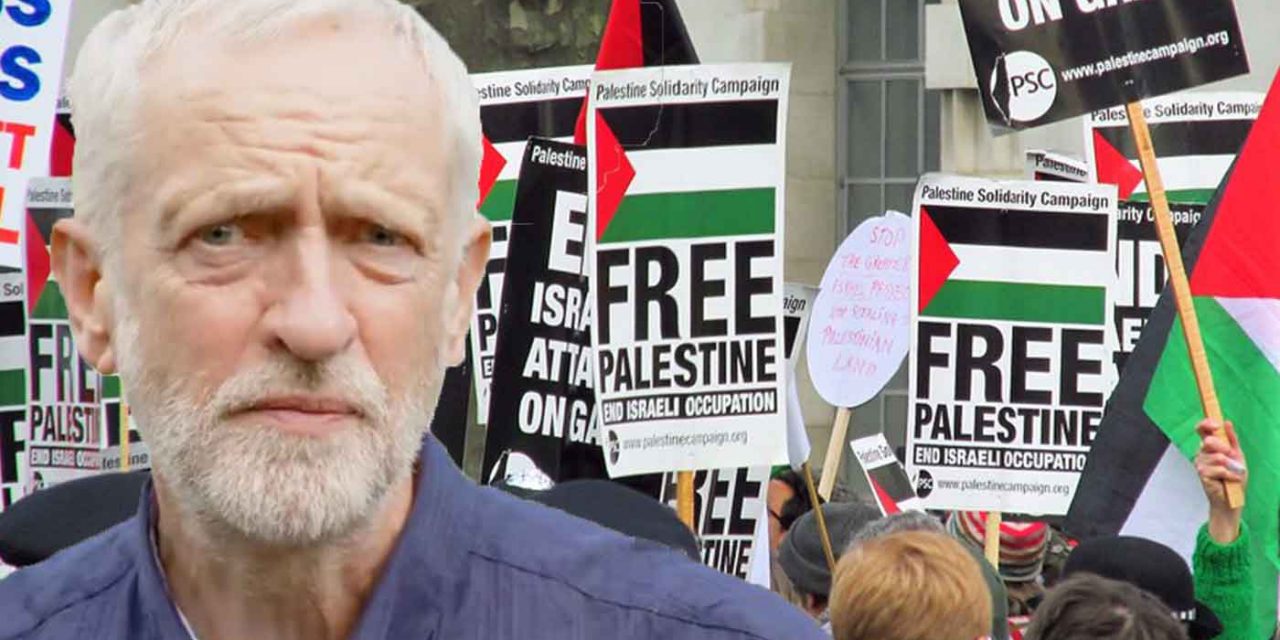 Labour leader Jeremy Corbyn gave a message to a pro-Palestinian hate rally over the weekend that included condemnation of Israel and calls for the UK government to condemn Israel, but no condemnation whatsoever about terrorism that has killed innocent Israeli civilians.

Corbyn says Labour is “united in condemning… Israeli forces”. And that the UK government should “unequivocally condemn” Israel and “freeze arms sales to Israel”. He also says a Labour government “will recognise a Palestinian state”.

When it comes to terrorist actions against Israeli civilians, however, he simply says, “Last week’s escalation of violence, during raids on Gaza, killing 25 Palestinians, and four Israelis, is both distressing and dangerous – and a reminder of the risk that full-scale conflict can return at any time.”

When Conservative ministers condemn violence between Israel and the Palestinians, you hear them condemn both sides. Even when Israel has been attacked and is acting in self-defence. Condemnation from Corbyn, however, is always one-sided, and his speech on Saturday was no different.

Not only is Corbyn not condemning the terrorists, but he’s also distorting the truth about the border violence and those killed in Gaza.

Out of the 25 people killed in Gaza that Corbyn mentions, a pregnant mother and 14-month-old child were killed by a Palestinian rocket that went astray and landed inside Gaza. More than half of the people killed by Israeli airstrikes were terrorists and every target Israel struck in Gaza was a terrorist target or base of operations for Hamas.

Hamas, on the other hand, fired 690 rockets into Israel’s civilian population. They did not target a single military base. They only attacked civilians. This is terrorism and a war crime.

A man of peace would seek to stop the violence perpetrated from both sides. A man of justice would speak out to defend all civilians. Jeremy Corbyn is neither.

Labour leader Jeremy Corbyn is urging you to take to the streets of London tomorrow in solidarity with the Palestinian people.

Here is Corbyn’s full message to the “National Demonstration for Palestine on London”:

“We cannot stand by or stay silent at the continuing denial of rights and justice to the Palestinian people.

The Labour Party is united in condemning the ongoing human rights abuses by Israeli forces, including the shooting of hundreds of unarmed Palestinian demonstrators in Gaza – most of them refugees or families of refugees – demanding their rights.

Last week’s escalation of violence, during raids on Gaza, killing 25 Palestinians, and four Israelis, is both distressing and dangerous – and a reminder of the risk that full-scale conflict can return at any time.

The silence of many governments, including our own, has been deafening. The UK government should instead unequivocally condemn the killing of demonstrators – including children, paramedics and journalists – and other civilians, and freeze arms sales to Israel.

We stand in solidarity with the Palestinian people and their struggle for their rights, supported by Israeli peace and justice campaigners like B’tselem and Gush Shalom.

A sustainable peace that delivers peace, justice and security to both Palestinians and Israelis is a necessity and an interest that we all share.

Peace cannot be achieved while the illegal occupation and settlement of Palestinian land continues, along with the multiple human rights abuses faced by Palestinians on a daily basis and actions of the Israeli government in flagrant disregard of international law.

If President Trump’s Middle East plan is, as expected, an attempt to bury the Palestinians’ right to a viable state alongside Israel, we will call on our government and the international community to reject it decisively.

No peace plan can succeed at the expense of the rights of the Palestinian people.

That’s why a Labour government will recognise a Palestinian state and press for an immediate return to meaningful negotiations, aimed at achieving a lasting settlement based on UN resolutions, international law and justice that has been too long denied.”