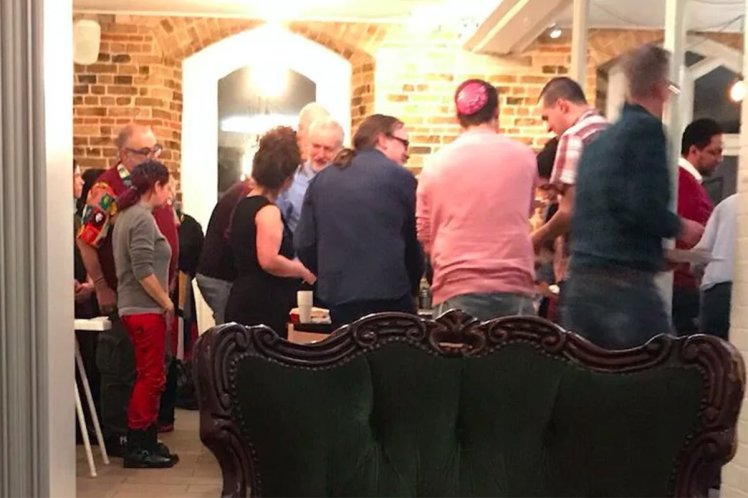 The Labour Leader, Jeremy Corbyn, has come under criticism for attending a Passover Seder last night with a group who calls for Israel’s destruction and even prayed for it at last year’s Seder.

Corbyn has been trying to win the hearts of the Jewish community in recent weeks following the ongoing anti-Semitism scandal. However, in a strange twist, Corbyn thought it would be appropriate to associate himself with a far-left Jewish group rather than speaking with the main voices of the Jewish community. A position that has drawn harsh criticism of the Labour leader.

It was clearly deliberate. No question of intent. Mocking. And disrespectful. #EnoughIsEnough

Jewdas appears to know its views are on the fringe of the Jewish community when it calls itself a “radical” Jewish group. It also hints at this in the description of its Seder on Facebook: “There’s no Seder like our Seder, There’s no Seder we know. Everything about it is heretic. Nothing that the Rabbis would allow.”

The Seder, which Corbyn attended, included a part about “Israel-Palestine” which read, “We take a moment to consider how **** the State of Israel is in general and particularly at the moment.” It also included the lines “Freedom calls: let water run like judgement upon Jerusalem. And justice like a mighty stream to Gaza”.

In the past Jewdas has tweeted a number of calls for the destruction of Israel. One such tweet said, “Israel is itself a steaming pile of sewage which needs to be properly disposed of”.

I’m baffled by this, on two fronts.
1. Why would Mr Corbyn go there, especially after the last couple of weeks?
2. Where do all these nutters come from? https://t.co/CaL78Sp963

Their 2017 Seder included a “Prayer against the State of Israel” which read as follows:

“Please God, smash the State of Israel. Smash it in the abundance of your love. Send forth your light and truth to those who lead. And JUDGE it – on Yom Kippur try to pay special attention to those who hold elective office. Establish in them, through some sort of magic God thing, wise counsel, that they might stop being so ******* racist. We’re sure you’ve been trying but srsly [seriously], you need to give this some more thought.”

“Strengthen the hands of those who seek to liberate our holy land that isn’t actually ours at all but everyone’s. Let them inherit salvation and life. And give peace to the land, and perpetual joy to all its inhabitants. Stop referring to the ‘house of Israel’, that’s gone, it’s been hundreds of years, get over it, get a flat. Plant in our hearts a love of everywhere. Destroy all borders, tear down all walls, quick, before Banksy comes and draws something on it.”

“And for all our people everywhere, may God be with them, and may they have the opportunity to go wherever they want to go, and help them to live in peace with their neighbours. Cause your spirit’s influence to emanate upon the dwellers of Stamford Hill and/or Golders Green.

“And **** the queen and ESPECIALLY **** PRINCE PHILIP. Burn down parliament. Full communism. Amen.”

Aside from being vehemently anti-Israel, Jewdas have also dismissed Labour’s long documented anti-Semitism as a “bout of faux-outrage” and claimed it is “the work of cynical manipulations by people whose express loyalty is to the Conservative Party and the right wing of the Labour Party”.

They also accused a Jewish Chronicle editor Stephen Pollard of being a “non-Jew” because he criticised Corbyn over the anti-Semitism scandal. You can read Stephen Pollard’s response to Corbyn’s attendance at the Jewdas Seder here.

Far from being a “right wing” attempt to overthrow Corbyn, here are the reactions today from Jewish and Labour groups who are speaking out against Mr Corbyn’s decision to associate with such a group.

“His actions so far do not match up to his words… The fact is that his first act following that is to go to a dinner last night with an organisation who on Thursday published a letter saying that this was all smears against Jeremy Corbyn and saying that this was a right-wing conspiracy to stop him becoming the Prime Minister of this country. The issue is the message he is sending to the community… The first act that he has done towards the community speaks volumes… the mainstream leaders were booed as their names were stated at last night’s dinner at which Jeremy Corbyn was present… Surely it cannot have been sensible, if Jeremy wishes to build bridges with the community, for the first act to be attending a dinner with people who are so hostile.”

“Jeremy Corbyn’s decision to spend his evening with an organisation that said “**** you ” to Jews who have serious and well founded concerns over antisemitism within the Labour Party, has truly topped off the worst week on record of awful relations between the Labour Party and the Jewish community. When we called on the Leader of our Party to show moral leadership, and take decisive action to stamp out antisemitism, this is not what we had in mind. Jewish Party activists have spent the weekend knocking on doors for local candidates for Council elections across the country. They do not deserve the indignity of our Leader making this situation even worse.”

“[Jewdas] refer to antisemitism in Labour as a smear. If Jeremy Corbyn goes to their event how can we take his stated commitment to be an ally against antisemitism seriously?”

“A week ago, Jeremy Corbyn claimed to be a “militant opponent” of antisemitism. He has done nothing in the past seven days to show that he is. He has instead chosen to repeatedly ally himself with those who suggest that the crisis of antisemitism in the Labour party is nothing but a smear manipulated by his political enemies. That he chose to attend last night’s Jewdas event is utterly unsurprising. It shows just how seriously he takes this problem.”

Below is a video interview of Campaign Against Antisemitism’s Gideon Falter talking to the BBC this afternoon.

Mr Corbyn has responded to this controversy this morning, speaking to Sky News he was asked about the meeting last night, to which he said, “It wasn’t a meeting last night it was a Seder event which is a celebration of Passover. I celebrated it with a lot of young Jewish people from my own community and my own constituency. It was very interesting talking to a lot of young people about their experiences in modern Britain and I learnt a lot, isn’t that a good thing?”

When asked a second question about how the process over the last two weeks had changed the way in which his party was dealing with anti-Semitism, Corbyn responded saying, “Anti-Semitism is a vile and evil thing within our society at any level anywhere any time and its got to be irradiated… wherever it arises. If it arises in my party then we have a process for dealing with it. We examine each case and if someone has committed any anti-Semitic act then they are suspended and ultimately could be expelled as a result of it. And we are very, very clear about that… in the whole of our society we cannot accept anti-Semitism in any form or indeed any other form of racism in our society.”