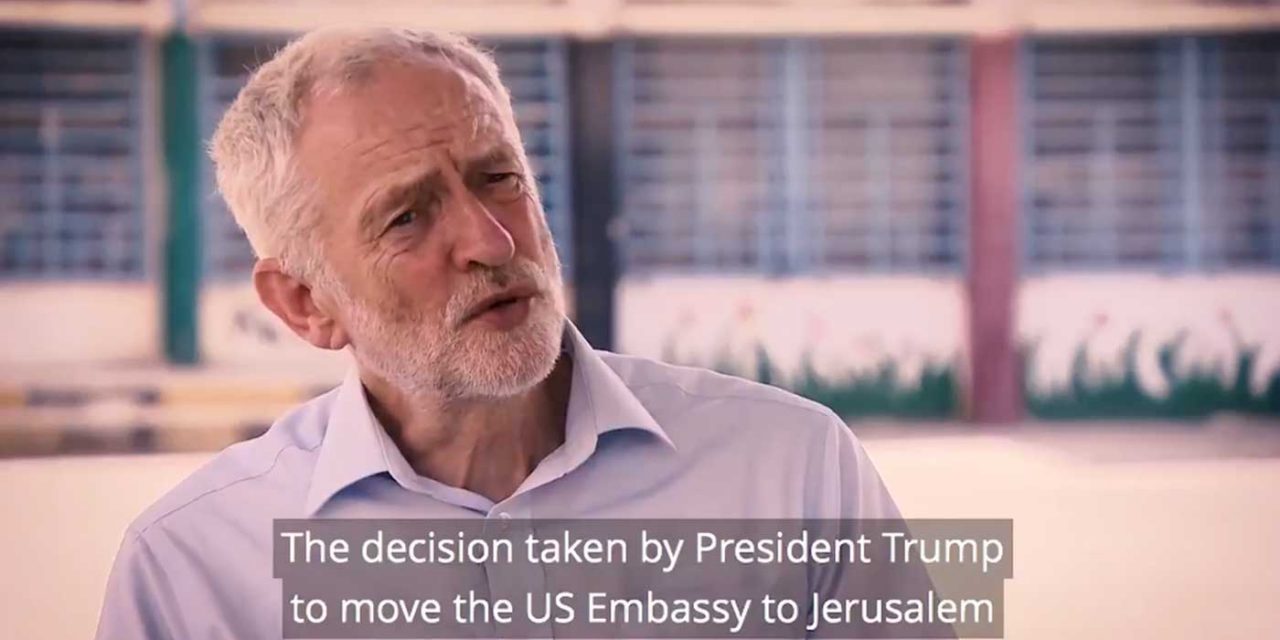 This week Labour Leader Jeremy Corbyn was in Jordan where he met with Palestinian “refugees”. Whilst there he made a number of statements that we profoundly disagree with.

Here are just some of his statements:

Corbyn posted a video on Twitter which shows himself in Baqa’a, one of the largest Palestinian camps in Jordan.

In Jordan, I went to Baqa'a, one of the largest Palestinian refugee camps.

We must work for a real two state settlement to the Israel-Palestine conflict, which ends the occupation and siege of Gaza and makes the Palestinian right to return a reality. pic.twitter.com/WVQrLVU7a8

“I came to this camp today to see the work of the UN Relief and Works Agency,” he said.

“My message is to the United States: You decided to cut funding from UNWRA, please think again.”

Corbyn was referring to the US decision to cut $60 million in UNRWA funding by the Trump Administration.

“The children of refugees need education. The community here need the health services that are provided by UNRWA,” Corbyn said.

This is true, Palestinian children need education and Palestinians need access to proper health services. Unfortunately, UNRWA is not providing either of these things as effectively as it should be. Instead, children are being taught by UN agencies about “jihad” and are learning to hate Israel. In Gaza, UNRWA run schools have been found to contain weapons caches for Hamas.

“UNRWA is an organization that perpetuates the problem of the Palestinian refugees,” Prime Minister Netanyahu said in a video at the time. “It also perpetuates the narrative of the so-called ‘right of return’ with the aim of eliminating the State of Israel, and therefore UNRWA must disappear.”

There is a clear need for reform at UNRWA, but Corbyn cannot see that.

Corbyn also said that Labour would immediately recognise “Palestine” if elected to government.

“I think there has to be a recognition of the rights of the Palestinian people to their own state which we as a Labour Party said we would recognise in government as a full state as part of the United Nations.”

A Palestinian state would be recognised “very early on” under a Labour government, he said.

We strongly believe that if a state of “Palestine” is to be recognised, this should only happen after a lasting peace has been achieved between Israel and the Palestinians. Giving the Palestinians a state before they have renounced their desire to destroy Israel gives them no reason to seek peace.

CUFI strongly disagrees with this statement. We believe that the US decision to recognise Jerusalem as the capital of Israel and to move the US embassy there was of historic importance and we highly commend President Trump for taking this bold stand. Jerusalem is the eternal, undivided capital of Israel and the Jewish people. And we believe that the UK should move its embassy to Israel’s capital.