A synagogue in Santa Monica, California, was been smeared with filth in a shocking anti-Semitic attack on the first day of the Jewish holiday of Hanukkah.

The Living Torah Center on Wilshire Boulevard had feces and food rubbed on one of its windows by an unknown figure.

Rabbi Boruch Rabinowitz told Breitbart the attack was not random – and followed another anti-Semitic incident in November.

Meanwhile, in suburban Paris, swastikas and anti-Semitic messages were found spray-painted across the front of a school named after Anne Frank. The graffiti included swastikas and Stars of David with the word Jude, as well as statements such as “Jews forbidden” and “Filthy Jewish and Romani people.” 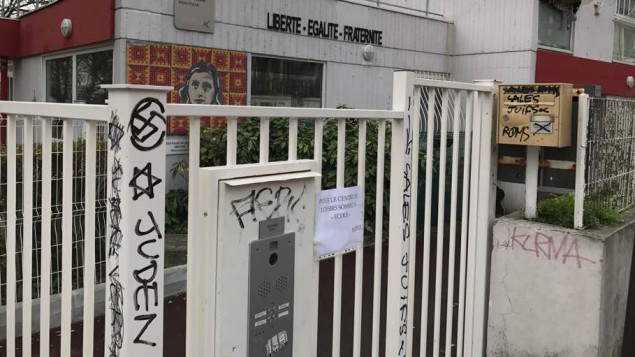 In Arizona, a large menorah in a family’s front yard was twisted into the shape of a swastika. The Hanukkah candelabra was made of gold spray-painted PVC pipes and solar-powered lights. Parents Naomi and Seth Ellis told the Washington Post they built the 7-foot menorah in front of their house after their three sons, ages 5, 6 and 9, asked for lights in their yard like their neighbors’ Christmas decorations.

Mom in Arizona had to tell her kids: "People hate us for no reason."https://t.co/fIeD7I0bzj pic.twitter.com/HGP7yfy06N