The United Kingdom has refused to sign the Paris Peace Conference communique today after only attending as an observer, according to a remarkable statement released tonight by the Government.

The one-day summit came to a close on Sunday evening with a statement, backed by the 70 countries, calling on Israel and the Palestinians to restate their commitment to a peace settlement and to refrain from unilateral actions, but the United Kingdom did not sign citing “particular reservations” and saying “there are risks this conference will harden positions”.

The UK statement reads as follows: 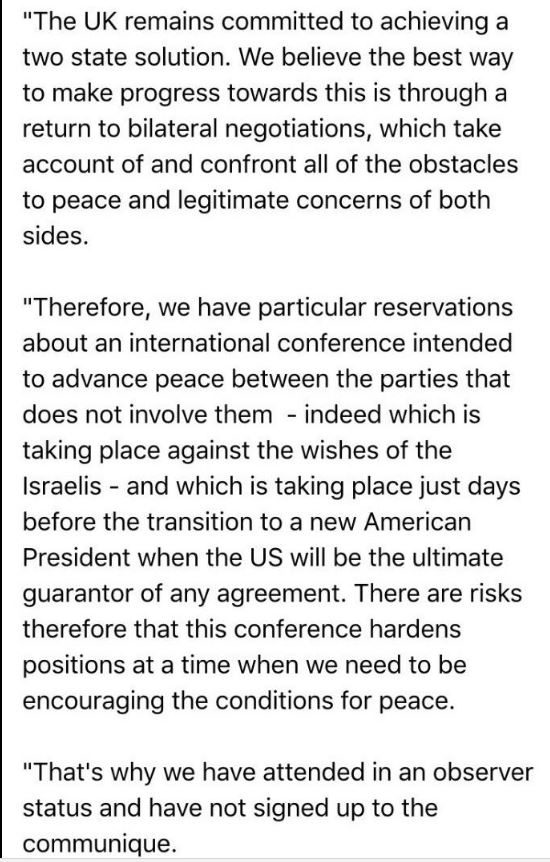 The UK statement follows reports earlier today that the UK had sent a “junior delegation” in contrast to some other countries that sent high-profile diplomats.

The Paris communique itself urged both sides to “officially restate their commitment to the two-state solution” and disassociate from voices that reject that goal. It also called for them not to take one-sided actions that could preclude fruitful talks.

But Israeli officials were jubilant that “problematic passages” in a contentious recent UN Security Council resolution on the settlements were not included in the Paris document. Resolution 2334, passed on December 23, harshly condemned the settlement enterprise, declaring that it has “no legal validity and constitutes a flagrant violation under international law and a major obstacle to the achievement of the two-state solution and a just, lasting and comprehensive peace.”

Furthermore, the Israeli officials expressed satisfaction over the fact that no further action against Israeli settlements is planned at the Security Council. US Secretary of State John Kerry had promised as much to Prime Minister Netanyahu in a phone call from Paris earlier Sunday.