Andrew Neil gives powerful speech on anti-Semitism and the Holocaust 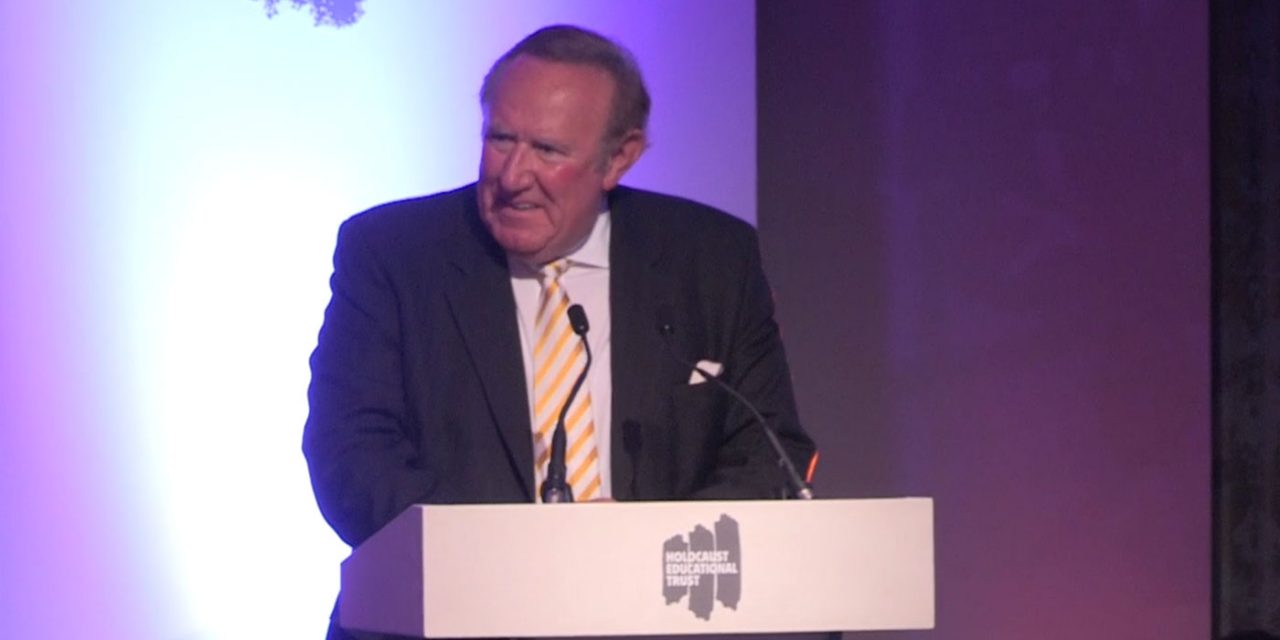 BBC presenter Andrew Neil has said that antisemitism on the far-left  is now a “more dangerous” trend in the UK than the extremism of the “knuckle dragging” far-right.

Warning that the scourge of antisemitism was on the increase Mr Neil said: “When I was growing up the obvious anti-Semites were the knuckle-draggers in the National Front. In this country what was left of the KKK in America, the Holocaust deniers like Jean-Marie Le Pen.”

“What has surprised me and what I think was entirely unpredictable was that the new development in this area is the rise of antisemitism on the far left. That is more dangerous than the knuckle dragging right.”

“I don’t say anti-Semitism of the left is entirely new. There’s a strain that’s always run through parts of the British intellectual left but I believe it’s on the rise and given far too easy a pass.” It is possible to “get away” with left-wing prejudice in a way that would never be tolerated when emanating from the right.

He pointed to a fringe event at the Labour Party conference where one speaker suggested it should be possible to debate the “Holocaust, yes or no” and, in a reference to the comments of Ken Livingstone that saw him suspended from the party, he insisted there “could be no bigger insult” than linking Zionism and the Nazis. “We know what he was doing,” said Neil “but still he’s regarded as a respectable politician.”

Andrew Neil went on to link the hatred of Jews with the atrocity of the Holocaust, stating that anti-Semitism “ends up in the concentration camps of eastern Europe.”

“Now I know it’s not the only genocide in world history, all of them are a stain on mankind. But other genocides, they did have some kind of rational grotesqueness too them. It was about territory, invasion, resources, revenge, or often just the mindless barbaric fury of people. That was not the case with the Holocaust which I think, not just in scale, but in operation and even in motivation, makes it unique.”

“You know it wasn’t mindless barbaric fury, the Nazis discovered that there was still one Jewish couple living in the north of Norway. They sent a whole group of SS people to get that one family, to bring that family. They did not even kill that family when they got to Norway; they brought the family back, this Jewish family from Norway so that it could experience the full horrors of the Holocaust.”

“That is not mindless barbaric fury, that is something else, it is absurd, it is illogical but it also happened in what was the best educated nation on earth that then put its education and its resources to the industrialisation of mass murder. It had never happened before.”

You can read the full transcript of his speech here.