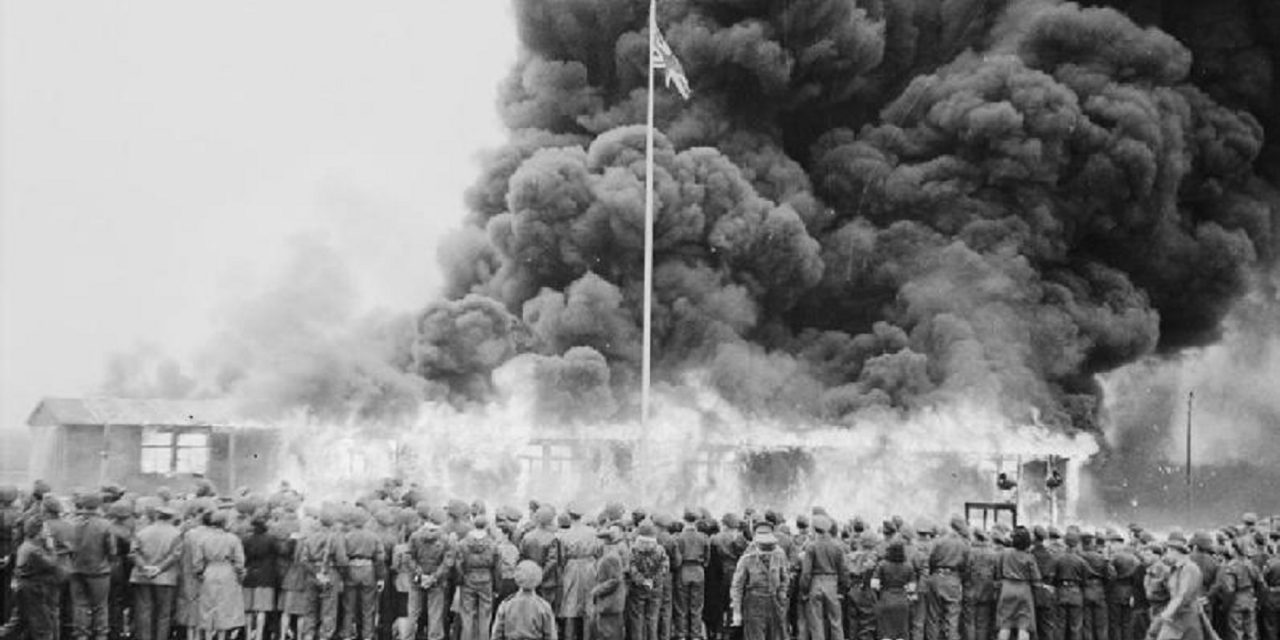 On the 15th April 1945, British forces liberated the Bergen-Belsen concentration camp in Germany. On Wednesday, seventy-five years to the day, we remember the tens of thousands of Jewish lives and others who were murdered there at the hands of Nazi brutality and pay tribute to the British soldiers who brought liberation and sacrificially gave of themselves to help those who survived.

When British forces entered Bergen-Belsen, around 10,000 bodies lay unburied around the camp and 60,000 were found starving and seriously ill without food and water, suffering from diseases such as typhus, dysentery and starvation. After evacuation, British soldiers burned the camp to the ground to stop the spread of disease.

Initially a prisoner of war camp, Belsen became a camp for Jews with foreign passports held as possible ‘leverage’ in exchange for German prisoners in Allied countries, but it then became a concentration camp for survivors of the death marches, including Anne Frank and her sister Margot. When it became too overcrowded, the Germans deprived their victims and conditions deteriorated even further. British soldiers were faced with the unimaginable – having to first bury the dead and bring relief to the suffering and dying survivors. But efforts to help the sick were incredibly challenging. Nearly 14,000 prisoners died after liberation. For the duration of Bergen-Belsen’s existence, over 50,000, mostly Jews, died.

In a new documentary, Return to Belsen, aired by ITV last week and available on ITVplayer, Jonathan Dimbleby retraced his war correspondent father Richard’s footsteps at the concentration camp, interviewing survivors, relatives and some of the few remaining liberators.

Ian Forsyth, 96, from Scotland, was just 21-years-old when he arrived at the gates of Bergen-Belsen concentration camp as part of the 11th Armoured Division in 1945.

With tears in his eyes, Ian admitted, “We gazed at them and they looked at us. And we couldn’t resist throwing something over. And that of course was the worst thing that we could have done. We didn’t know it at the time, but I regret it now. Because I know that anything that we threw over the person who eat it would die.”

15th of April marks the 75th anniversary of the liberation of Bergen-Belsen, the first concentration camp liberated by the British.Return to Belsen, available on ITV player, is a documentary where Jonathan Dimbleby retraced his war correspondent father Richard’s footsteps at the concentration camp, interviewing survivors, relatives and some of the few remaining liberators.Here are some clips from that powerful documentary.#BergenBelsen #Holocaust #NeverAgain #WeRemember #CUFI

Posted by Christians United for Israel – UK on Tuesday, 14 April 2020

“It haunts me, I can’t get rid of it… how an earth can mankind sink to this low?’ the veteran continued, “[Belsen] haunts me because I don’t want my sons and grandsons and great-grandsons to go through that terrible time that we had to go through. I would do anything to prevent that. I can wake up in the middle of the night and think about it, I can’t get rid of it.”

The eye-witness accounts like that of Ian and many others must never be forgotten. Their fight against the evil of Nazi Germany and their fight to save the lives of thousands must also be remembered with gratitude. Despite their regret that more were not saved, the experiences of those British soldiers and medical teams must not be erased from history.

The majority of those who survived Bergen-Belsen made Israel and the UK their home. Today we stand with our Jewish friends and declare, “Never again”.

At CUFI we truly do mean, “Never-again”. We are committed to do our part, however small, in remembering the millions of Jews who were murdered during the Holocaust, including the tens of thousands at Bergen-Belsen. This is why we have today launched our Holocaust Remembrance page, where we will continue to add resources to aid in remembering.

It is also why CUFI believes that the National Holocaust Memorial should go ahead when this COVID-19 crisis has passed (See petition here). Britain’s role in the liberation of concentration camps, the defeat of Nazi Germany, the way in which Britain became a home for many survivors and the role the UK had in the future establishment of the State of Israel is why it should be located in the heart of our capital.

This is our story.

We have an important role to continue this legacy of remembrance and is why we believe the memorial and education centre should be located outside the Houses of Parliament for future generations, and visitors from the world, to see.

Please join us on Wednesday 15th April at 7:50pm on the 75th anniversary for one minute of silence, prayer and reflection in memory of all those who were murdered at Bergen-Belsen and for all those who gave their lives liberating it.