Jesus in the Passover – exploring the Jewish roots of Christianity 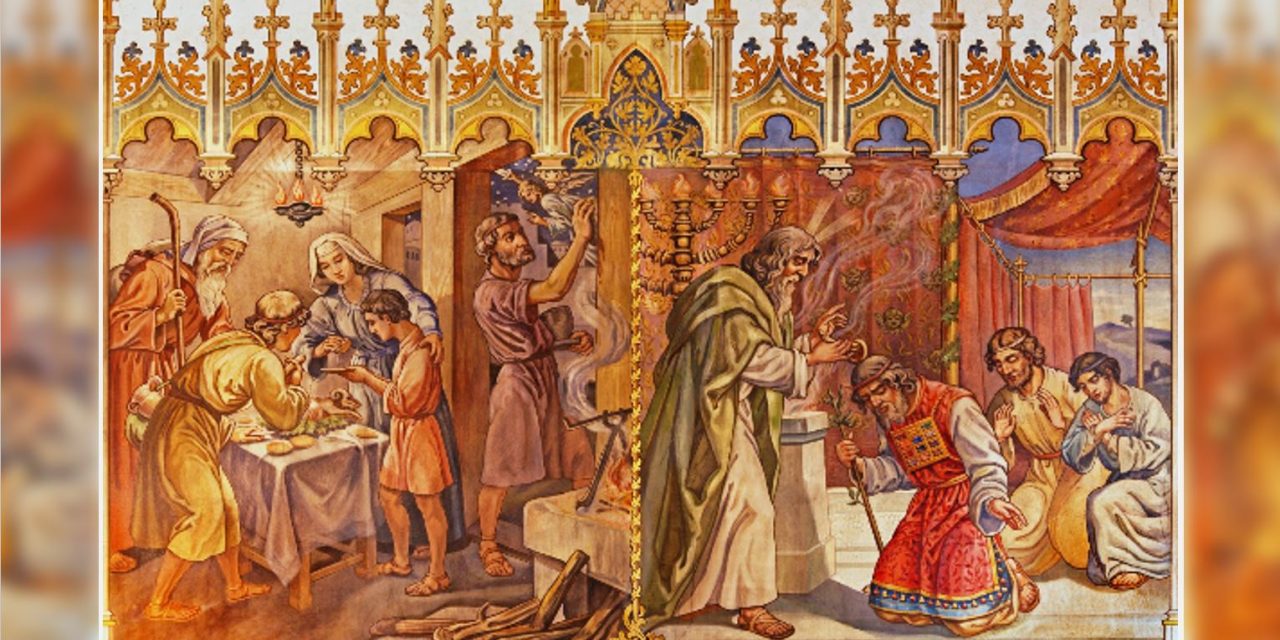 “So this day shall be to you a memorial; and you shall keep it as a feast to the LORD throughout your generations.”  – Exodus 12:14a

For more than three millennia, the Jewish people have faithfully kept from generation to generation the observing of the Passover. This important festival retells the story of the nation of Israel with its account of obedience, expectation and deliverance when the people of God were redeemed from brutal enslavement in Egypt.

The focus of the celebration is a remembrance of the Passover lamb, which was sacrificed so that the first born of every home might be spared as the Lord passed over the houses during the last and final of ten plagues in Egypt. The slaughtered lamb was to be eaten and its blood smeared onto the doorposts of their properties as a sign of faith.

For Christians, it is important to recognise that Passover plays a central part of the Christian faith. In fact the early church celebrated Passover for 300 years after the death of Jesus until Constantine made it illegal in an effort to separate Jews from Gentiles. This deliberate severing led to horrific anti-Semitism across Europe, including in England as we explain later in this article.

The Bible presents the Jewish feast of Passover as an important component in understanding Christianity. The first occurrence of the Passover in the New Testament was when the young Jesus visited Jerusalem with his parents, as He did every year.

“His parents went to Jerusalem every year at the Feast of the Passover. And when He was twelve years old, they went up to Jerusalem according to the custom of the feast.

After two thousand years of anti-Semitic teaching, the church has lost sight of the Jewish nature of Jesus, who Himself celebrated Passover. But let us remember that Mary and Joseph raised Jesus, who was of the tribe of Judah, according to the traditions of the Jewish faith. He was taken to be circumcised on the eighth day (Luke 2:21); at the end of his twelfth year he was taken to the temple for His bar mitzvah, and Jesus began his ministry at 30 years of age (Luke 3:23) according to the custom of “entering into one’s full strength [life’s work]” at thirty (Everyman’s Talmud).

Judaism was the only religion on earth during the time of Jesus that believed in one omnipotent Supreme Being. The Jewish people gave to Christianity the foundation of the Word of God, so to overlook the Jewish background of Jesus and his practice of Judaism, is to undermine the very foundations of Christianity. As CUFI Founder John Hagee has repeatedly said, “The Jewish people do not need Christianity to explain their existence, but we cannot explain our existence without our Jewish roots.”

It is with this appreciation of the Jewish nature of our Lord and Saviour Jesus Christ that we come to the evening before Jesus was crucified. All four Gospels indicate that Jesus’s death took place at the time of the Passover. In what is commonly referred to as the Lord’s Supper, the Bible makes it clear that the meal Jesus had with his disciple was the Passover Seder:

Now on the first day of the Feast of Unleavened Bread the disciples came to Jesus, saying to Him, “Where do You want us to prepare for You to eat the Passover?” And He said, “Go into the city to a certain man, and say to him, ‘The Teacher says, “My time is at hand; I will keep the Passover at your house with My disciples.”’” So the disciples did as Jesus had directed them; and they prepared the Passover.

Then He said to them, “With fervent desire I have desired to eat this Passover with you before I suffer”

When the lamb was roasted and eaten, none of its bones were to be broken according to Exodus 12:46. It was customary during an execution by crucifixion to break the legs of the victim. But, in the case of Jesus, though they broke the legs of the two robbers at his side, they did not break Jesus’ legs because he was already dead (John 19:32-36).

Among the many symbols included in the Passover meal are the five cups of wine. The first four cups of wine represent the four promises God made to the Israelites in Exodus 6:6-11. These cups all symbolise the deliverance and freedom from bondage in Egypt.

The New Testament names one of the cups—the cup taken after supper, which is traditionally the third cup. Jesus calls this cup “the new covenant in My blood, which is shed for you” (Luke 22:20). Later that evening in the garden of Gethsemane He cried out to the Lord in prayer, “Father, if it is Your will, take this cup away from Me; nevertheless not My will, but Yours, be done” (Luke 22:42). For Christians, Jesus’s willingness and obedience to “take this cup” is what forms the heart of Christian belief in Jesus’s redemptive sacrifice.

There is also a fifth cup, known as the cup of ultimate redemption, which has been part of the Passover since temple times. But since its inception, the cup has never been taken, awaiting the coming of the Messiah. The fifth cup of “final redemption”, also known as Elijah’s cup, corresponds to the fifth promise, stated in Exodus 6:8:

“And I will bring you into the land which I swore to give to Abraham, Isaac, and Jacob; and I will give it to you as a heritage: I am the LORD.’” [Cup 5]

Observant Jews to this day do not drink of the fifth cup, awaiting the coming of the reigning Messiah.

When Jesus and His disciples came to the final cup during their last Passover celebration together, Jesus refused to drink.

Then He took the cup, and gave thanks, and said, “Take this and divide it among yourselves; for I say to you, I will not drink of the fruit of the vine until the kingdom of God comes.”

All four Gospels tell of Jesus’ refusal to drink of the cup before His death and resurrection, but will do so when the “kingdom of God comes”.

The symbolism of the Passover meal continues even further: during the seder meal there are three matzot which are placed on top of each other. The middle matzah is subsequently broken in two with the smaller piece being eaten and the larger piece being wrapped in a white cloth and hidden. Following the meal, the children find the hidden matzah and receive a reward. There are various explanations as to why the Jews carry out this tradition, but no definitive answer.

Jesus, at the end of the Lord’s supper, takes the unleavened bread and breaks it, stating that it is symbolic of His body. Jesus gave his disciples the command to “remember” the Passover by instructing his disciples to always partake of it “in remembrance of me”.

A CHURCH SEPARATED FROM ITS JEWISH ROOTS

The parallels between Passover and the Lord’s Supper were sadly lost due to early Christendom’s attempt to sever Christianity from its Jewish roots. This disconnection paved the way to unbelievable hostility towards the Jewish people. In medieval Europe, Jews were forced to celebrate Passover with extreme caution and fear.

With the “Easter” festival and Passover regularly coinciding, Jews were often blamed for the Crucifixion and were resented for their rejection of Christianity. They became targets of hatred, superstitions and bizarre accusations. There were hundreds of blood libels throughout history resulting in the death of thousands of Jews at the hands of Christians.

One such example was in Norwich, England, on the Passover of 1144. A young man named William, a tanner’s apprentice, disappeared during the week of Easter, which coincided with Passover that year. Charges immediately arose that the Jews killed him as part of a ritual murder. The accusations were unfounded and the Sheriff of Norwich ignored the charges and granted the Jews protection. But the story was not forgotten, and the missing boy, William, became a martyr amongst the town’s people. A short time later, the Jews of Norwich were attacked by mobs seeking vengeance and were forced to flee.

Eleven years later, the blood libel resurfaced in England bringing horrific consequences to Jews attending a wedding in Lincoln. A Christian boy named Hugh was found in a cesspool where he apparently had fallen. After subsequent forced, tortured confessions, 19 Jews were hanged. Soon, the anti-Semites of England accused all of the country’s Jews of participating in ritual murder. The many accusations that followed were often accompanied by violent attacks against Jewish communities across the country. This false  conspiracy lasted in England for centuries.

These shameful acts of anti-Semitism could not be further away from the teaching and commands of Jesus. In remembering Jesus’s death they had in fact forgotten the Jesus of the Passover. The devolving of Christianity’s Jewish roots turned hearts away from loving the Jewish people to gradually fostering and enacting some of the most evil anti-Semitism imaginable. The extreme extent of their diversion away from true biblical Christianity serves as a warning to the Church today to get back to the Bible. Christians must stand with the Jewish people and for truth.

It seems unimaginable that this dark chapter of our country’s history would be repeated, but the same hatred does exist. Anti-Semitism also exists in the Church today where there is ignorance to what the Word of God says about Israel and the Jewish people. In a world where anti-Semitism is on the rise, the Church must be an advocate against it.

Today, more Christians are rediscovering the Jewish roots of their faith and recognising that what we share in common with the Jewish people is far greater than that in which we differ.

This article features in a previous issue of our TORCH magazine. Subscribe for free at www.cufi.org.uk/subscribe