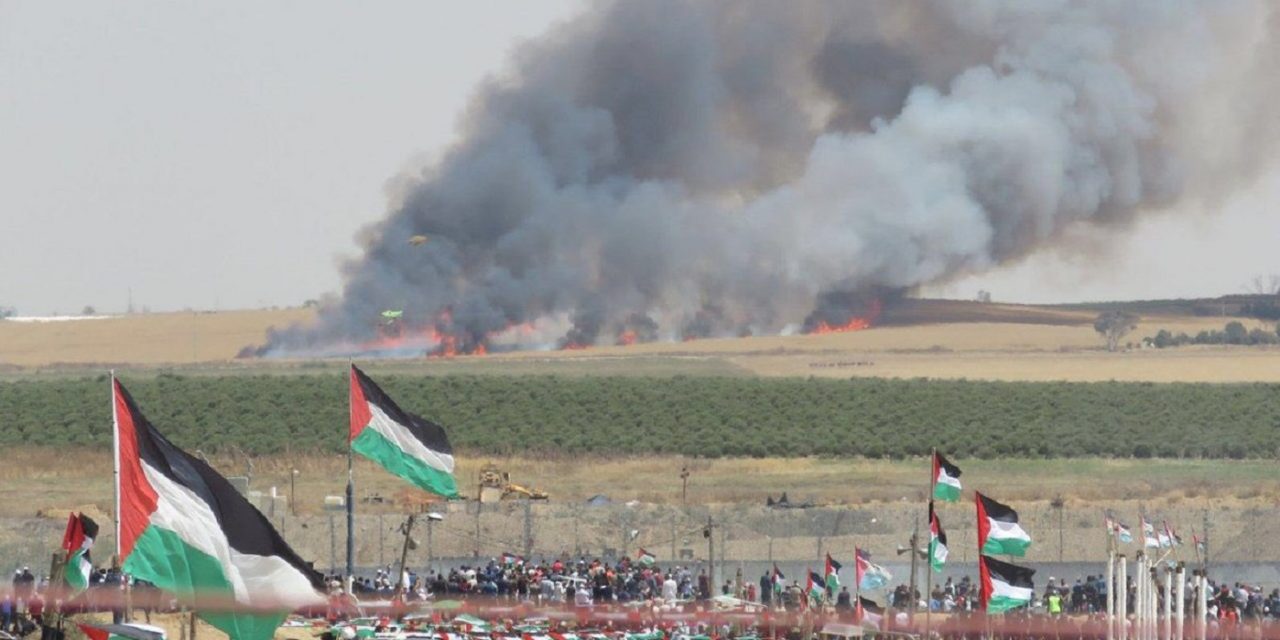 Thousands of Palestinian protesters rioted at the Israel-Gaza border on Wednesday to mark “Nakba Day”, with Hamas granting schools to close in order for families and children to respond to their call.

Rioters. reportedly around 10,000 in number, burnt tyres and threw stones at several points along the Gaza Strip’s border with Israel, an IDF spokesman announced. Several attempts have been made to approach the border fence. The IDF is pushing back the rioters with crowd control means.

Fires have broken out in recent hours near Israeli communities around the Gaza Strip, apparently ignited by arson balloons launched by Gaza terrorists.

All businesses, government offices and schools were closed in the Gaza Strip to allow thousands to answer Hamas’s call to protest on the border with Israel.

Several injuries have been reported among the rioters, as well as one fatality.

Since 30 March 30 of last year, when Hamas began it’s so-called “March of Return,” in which thousands gathered to hurl stones and riot, large violent gatherings have taken place on a weekly basis, typically on Friday, at Israel’s border.

A post by Israel Ministry of affairs, read, “No, it’s not a snow day or bank holiday in Gaza. Today, Hamas suspended schools across the Gaza Strip, sending children to participate in dangerous and violent riots alongside thousands of Gazans near the border of Israel.

“These riots are known to include explosive and incendiary devices, putting innocent children in the face of danger.

“When will Hamas stop using children and the people of Gaza as pawns in its ruthless campaign of terror?”

Rhetoric from Palestinian leadership on Tuesday was fiery as thousands attended a pre-Nakba Day rally in front of the offices of the United Nations Relief and Works Agency (UNRWA) in Gaza. Speakers slammed U.S. President Donald Trump’s much-anticipated peace plan.

“The issues of Jerusalem and the refugees are not for sale or bargaining,” PLO official Ahmed Abu Holi said. “The Palestinian people will not sell their rights and principles in return for dollars, and will not compromise on the payments to the families of martyrs and prisoners. We will not surrender to blackmail.”

Israeli police have also prepared for any spillover of violence from Gaza into Judea and Samaria and especially Jerusalem.

These are terrorist-backed violent riots and they endanger the lives of innocent civilians.