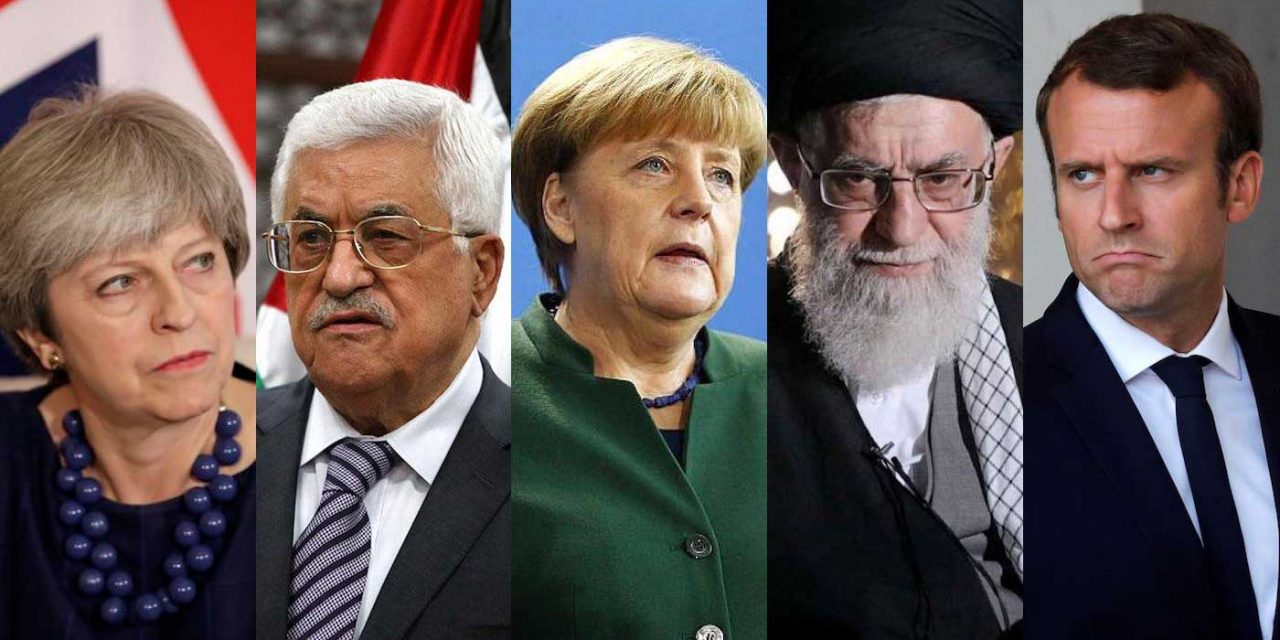 Since President Donald Trump gave formal recognition of Jerusalem as Israel’s capital on Wednesday, the reactions coming in from around the world have been interesting to see.

While the reactions have ranged from hysterical threats by Islamist terror groups to more measured responses by Western governments, one thing is the same, they are all united in their opposition to Trump’s decision.

Prime Minister Theresa May issued a statement saying the following:

“We disagree with the US decision to move its embassy to Jerusalem and recognise Jerusalem as the Israeli capital before a final status agreement. We believe it is unhelpful in terms of prospects for peace in the region. The British Embassy to Israel is based in Tel Aviv and we have no plans to move it.”

“Our position on the status of Jerusalem is clear and long-standing: it should be determined in a negotiated settlement between the Israelis and the Palestinians, and Jerusalem should ultimately be the shared capital of the Israeli and Palestinian states. In line with relevant Security Council Resolutions, we regard East Jerusalem as part of the Occupied Palestinian Territories.”

Trump's recognition of Jerusalem as Israel's capital, including occupied Palestinian territory, is a reckless threat to peace. The British Government must condemn this dangerous act and work for a just and viable settlement of the conflict.

Federica Mogherini, the EU’s foreign policy chief said, “President Trump’s announcement on Jerusalem has a very worrying potential impact. It is a very fragile context and the announcement has the potential to send us backwards to even darker times than the ones we’re already living in.”

“The European Union has a clear and united position. We believe the only realistic solution to the conflict between Israel and Palestine is based on two states and with Jerusalem as the capital of both.”

UN Secretary General António Guterres criticised “any unilateral measures that would jeopardise the prospect of peace for Israelis and Palestinians.”

“Jerusalem is a final-status issue that must be resolved through direct negotiations between the two parties on the basis of the relevant Security Council and General Assembly resolutions, taking into account the legitimate concerns of both the Palestinian and the Israeli sides,” Mr. Guterres said.

“In this moment of great anxiety, I want to make it clear: There is no alternative to the two-state solution,” he said. “There is no Plan B.”

French President Emmanuel Macron branded Trump’s stance as “regrettable” and called for efforts to “avoid violence at all costs”.

Macron affirmed “the attachment of France and Europe to the two-state solution, Israel and Palestine living side by side in peace and security within internationally recognized borders, with Jerusalem as the capital of the two states”.

Germany – “does not support”

German Chancellor Angela Merkel said through her spokesman that she “does not support” Trump’s reversal of decades of US policy.

“The status of Jerusalem can only be negotiated within the framework of a two-state solution,” spokesman Steffen Seibert wrote on Twitter.

Russia’s foreign ministry issued a statement saying the move threatened security in the region and could lead to “uncontrollable consequences.”

“Moscow views the decisions announced in Washington with serious concern,” the statement said. “In light of this we call on all involved parties to show restraint and forgo any action that would be fraught with dangerous and uncontrollable consequences.”

Moscow reiterated its long-held view that a solution to the dispute over Jerusalem’s status should be negotiated through “direct Palestinian-Israeli talks”.

The President of Turkey, Recep Tayyip Erdogan slammed Trump’s Jerusalem announcement, saying, “The U.S. president has disregarded the 1980 UN decision. Until now, no country in the world other than the U.S. and Israel has taken a step that is contrary to the 1980 UN resolution. Only these two countries have gone against it. It is not possible to understand what Trump wants to achieve. Jerusalem was viewed as a place of worship for Muslims, Christians, and Jews. It was the first kiblah of Muslims. Masjid al-Aqsa was our first kiblah. To take such a step will throw the region into a ring of fire. Political leaders should make peace, not cause disorder. Trump’s declaration aims to stir up the region, not to bring peace.”

Turkish Foreign Minister Mevlut Cavusoglu wrote on Twitter: ”We condemn the irresponsible statement of the US administration… the decision is against international law and relevant UN resolutions.”

We condemn the irresponsible statement of the US Administration declaring that it recognizes Jerusalem as the capital of Israel and it will be moving the US Embassy in Israel to Jerusalem.
This decision is against international law and relevant UN Resolutions.

Jordan condemned Trump’s recognition of Jerusalem as amounting to a violation of international law and the UN charter.

“The decision of the American president to recognise Jerusalem as Israel’s capital and the transfer of the US embassy to this city constitutes a violation of decisions of international law and the United Nations charter,” said government spokesman Mohammed Momani.

Mahmoud Abbas, president of the Palestinian Authority, said, “These measures are a reward to Israel’s violations of international resolutions and an encouragement for Israel to continue its policy of occupation, settlements, apartheid and ethnic cleansing.”

In a separate meeting Abbas said, ”Fortunately, there was a positive response from all the countries in the world, from Europe and from Africa and countries close to America that don’t support the U.S.”

“These all are messages to Trump that what he did is an unacceptable crime.”

Ayatollah Ali Khamenei, Supreme Leader of Iran, said, “Their announcement of Quds as the capital of Occupied Palestine proves their incompetence and failure. In regards to Palestine, they are helpless and unable to achieve their goals. Victory is for the Islamic nation. Palestine will be free, and the Palestinian people will be victorious. The modern-day pharaoh is represented by the U.S., the Zionist regime and their accomplices in the region, who seek to create wars in our region, and this is plotted by the U.S. … The Islamic world will undoubtedly stand against this plot and the Zionists will receive a big blow from this action and dear Palestine will be liberated.” (Note: “Quds” means Jerusalem; “Occupied Palestine” means Israel.)

Hassan Rouhani, President of Iran (and certified “moderate”) said, “We call on Muslim peoples to enter into a big uprising against the plot of transferring the U.S. Embassy to Jerusalem. The declaration of Jerusalem as the capital of the Zionist entity is a new conspiracy facing the Islamic world these days. We have to be aware and ready in the face of the U.S., the Zionist entity, and their tails.”

Hamas – “We hereby call for terrorism and armed struggle”

Ismail Haniyah, head of the Hamas government in Gaza, said, “Our position remains as it is, Palestine from the sea to the Jordan river. We will not agree to two states and not to the division of Jerusalem. I hereby call for terrorism and armed struggle … We want the uprising to last and continue to let Trump and the occupation regret this decision.”

POTUS' announcement reveals the true face of the Palestinian government.
Haniyah: "Our position remains as it is, Palestine from the sea to the Jordan river. We will not agree to two states and not to the division of Jerusalem. I hereby call for terrorism and armed struggle.

Hezbollah – “We support the call for a new Palestinian intifada”

Hassan Nasrallah, leader of Hezbollah, said, “We support the call for a new Palestinian intifada and escalating the resistance which is the biggest, most important and gravest response to the American decision.”

Al-Qaeda – “Target US, Jews and Christians”

The terrorist group on Friday called for holy war or jihad, describing America as a modern-era “pharaoh” oppressing Muslims, according to a statement posted on the militant group’s media arm as-Sahab.

“The surest and quickest way to confront the aggression of the pharaoh of our age — America — is jihad in Allah’s name by targeting the vital interests of the United States and its Zionist (Jewish) and Crusader (Christian) allies everywhere,” the statement said.

Dawoud Shebab, spokesman for Palestinian Islamic Jihad, said, “We implore Arabs and Muslims to stop taking America as a friend and ally after it chose to stand entirely on Israel’s side. We demand that the Arab Peace Initiative be shelved and that Arab states stop normalizing relations with the Israeli occupation and close all Israeli diplomatic missions inside their countries.”

“I cannot remain silent about my deep concern for the situation that has developed in recent days,” Francis said at his weekly general audience at the Vatican. “And at the same time, I wish to make a heartfelt appeal to ensure that everyone is committed to respecting the status quo of the city, in accordance with the relevant resolutions of the United Nations.”

“Jerusalem is a unique city,” he said, “sacred to Jews, Christians and Muslims, where the Holy Places for the respective religions are venerated, and it has a special vocation to peace.”

The pope added, “I pray to the Lord that such identity be preserved and strengthened for the benefit of the Holy Land, the Middle East and the entire world, and that wisdom and prudence prevail, to avoid adding new elements of tension in a world already shaken and scarred by many cruel conflicts.”

Nobel laureate Desmond Tutu said, “God is weeping over President Donald Trump’s inflammatory and discriminatory recognition of Jerusalem as the capital of Israel.”

The 86-year-old former archbishop, a veteran of the anti-apartheid struggle in South Africa, rarely makes public statements because of health problems.

His new statement says that “it is our responsibility to tell Mr. Trump that he is wrong.”

He adds that “God does not discriminate” between people of various religions and that “those who claim divine rights for themselves to physical property on earth are false prophets.”