British Prime Minister Theresa May praised the UK’s relationship with Israel in a letter published in the latest edition of the Conservative Friends of Israel’s magazine.

In the letter, May wrote that Britain’s relationship with Israel is “as strong as ever” and pointed out to bilateral trade, scientific research, security cooperation and shared values.

In light of the Palestinian Authority’s recent threat to sue the UK over the 1917 Balfour Declaration, May confirmed that Britain “will soon be marking a century since Foreign Secretary Arthur James Balfour, a Conservative, confirmed the UK’s support for the establishment of a national home for the Jewish people”.

Pointing to terror groups Hamas and Hezbollah, she stated that the “dangers that confront Israel remain considerable”, and pledged that the UK “must do everything we can to ensure [Israel’s] citizens feel safe and secure in their own country”.

May also reaffirmed the British Government’s position that “Israel has the right to defend itself”.

Shortly after May was sworn in, taking over from David Cameron who stepped down after the “Brexit” vote, Prime Minister Binyamin Netanyahu sent her a warm welcome and congratulated her on her appointment.

On the night before she was sworn in, May dined with UK Chief Rabbi Ephraim Mirvis and his family, a fact for which Rabbi Mirvis praised May. 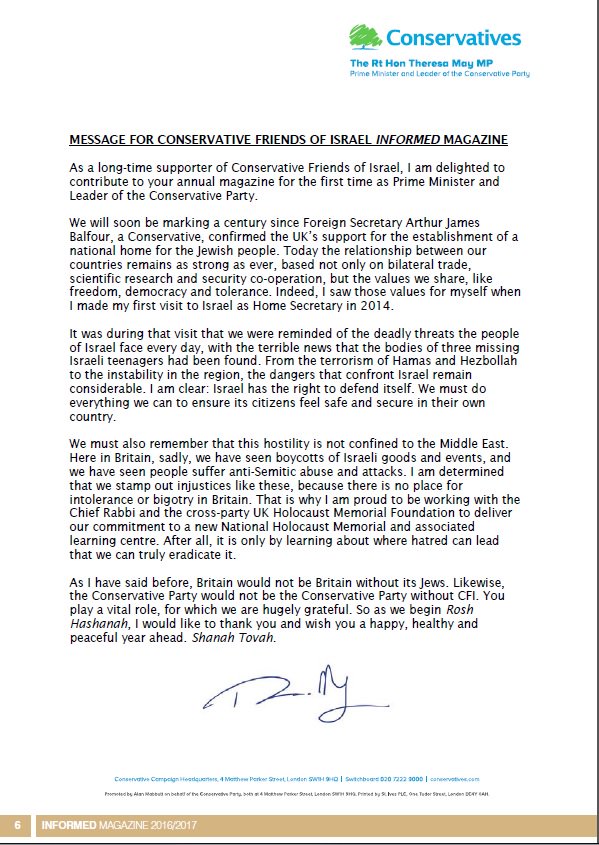